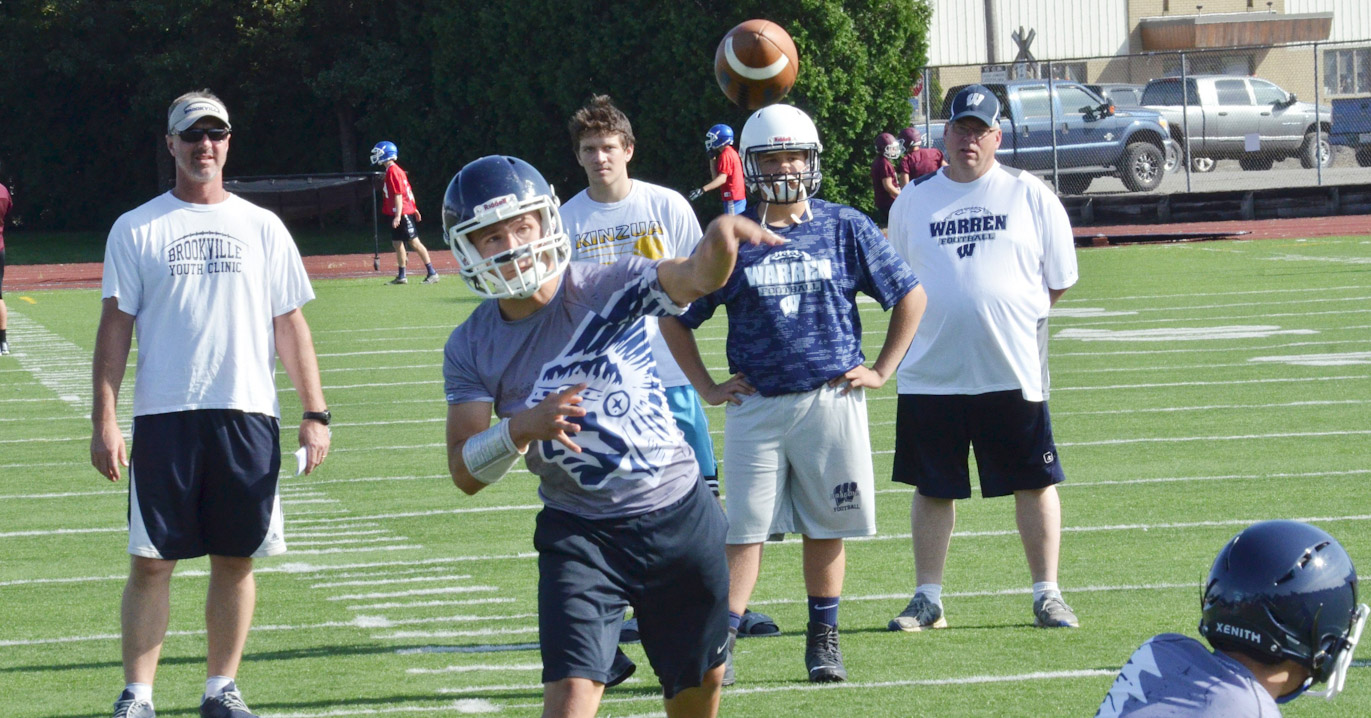 Brookville's Jack Krug, throwing a pass during a 7-on-7 game in the summer of 2018, leads the Raiders into tonight's season-opener at home against DuBois. (Photo by Andy Close)

District 9’s opening week of football season has just six games on the docket as the preseason posturing of how to deal with the COVID-19 pandemic led to a swath of northern district schools to follow the Intermediate Unit 9’s mandate that limited traveling outside its geographic area to play games.

The Bubble Teams don’t play until next week.

This week, the Non-Bubble programs or District 9 Southern Large School and Small School Division teams along with Clearfield’s Mountain League opener make up the schedule.

The Large School matchups: DuBois at Brookville, Punxsutawney at Central Clarion County (at Clarion-Limestone) and Karns City at Moniteau.

It’s the first District 9 League game that the Beavers get to play since moving into the league in the offseason. But this won’t exactly be the schedule the Beavers were expecting, although all of the games on the readjusted COVID-19 plan does include all Large School teams.

It’s the third straight year the Beavers and Raiders meet, the last two non-conference matchups that were split with the Raiders winning 35-25 last year in Brookville and the Beavers winning 16-7 in 2018.

While Raiders coach Scott Park enters his fifth season, the Beavers have a new coach in former assistant T.J. Wingard. The Beavers were winless on the field last year at 0-10, but got a forfeit win because of Erie High’s use of an ineligible player.

Keth is the top returning receiver after catching 50 passes for 688 yards and 7 TDs. Taylor was last year’s Large School Division MVP at linebacker and joined Park and Keth as the top three tacklers on the unit. MacBeth, who caught 48 passes for 619 yards and 5 TDs, intercepted eight passes at cornerback.

The Beavers’ Ruben Estrada (58-211, 2 TDs) is the leading returning rusher while seniors Zach Shilala (40-382, 5 TDS) and Dale Kot (23-332, 3 TDs) are the top returning receivers. Senior Tyler Christner is the top returning tackler on the defensive side of the ball.

Alan Nichol is the new coach for the Chucks, who head to the C-L Sports Complex for a matchup with the Wildcats, who debut their new name from the same co-operative that was started last year with Clarion-Limestone and North Clarion.

Nichol enters his second tenure as Chucks head coach. He directed his alma mater from 2009-14 before stepping down. He replaces Brad Wright who was the coach since then.

It’s a Butler County rivalry matchup right out of the gate for the Gremlins and Warriors in West Sunbury.

The Gremlins bounced back from a losing season in 2018 to go 8-4, which included a 21-6 win over the Warriors. They’ll look to replace do-it-all graduated quarterback Anthony Kamenski, who ran for over 1,000 yards. Senior Brayden Christie looks to be the new signal-caller while junior fullback Luke Garing (571 yards, 11 TDs) is the top returning rusher. Senior tight end Nathan Waltman leads the line as well as the defense where he racked up a team-high 93 tackles.

The Bulldogs, last year’s Class 1A runner-up to Coudersport, open with the Golden Tide at home. Last year, they blanked the Tide at home, 39-0.

Union/ACV will have a new quarterback with senior Tanner Merwin, who moves from receiver where he caught 28 passes for 564 yards and 6 TDs. He’ll now look for last year’s top receiver in junior Caden Rainey (38-564, 4 TDs). Senior Kyler Culbertson (73-480, 4 TDs) was the leading rusher in a committee approach. Defensively, junior Carter Terwint is the top returning tackler with 59 stops. Merwin intercepted five passes, returning two for TDs.

The Bison, 9-3 last year, head to Spring Mills to face the Rams, who they beat 56-49 in a shootout early last season. It’s Clearfield coach Tim Janocko’s 35th season, which has him at 284 wins.

Clearfield has high hopes this year, which will be a move down to Class 3A for at least the next two seasons. Junior quarterback Oliver Billotte is back after throwing for 1,903 yards and 17 TDs while rushing for 400 yards and 14 more TDs. Seniors Jake Lezzer (40-619, 4 TDs in seven games) and Matt Pallo (26-488, 6 TDs) are his top returning targets. Defensively, senior Nick Domico made over 80 tackles to lead the Bison.

The Rams, who didn’t lose again last year until the second round of the District 6 Class 2A playoffs and finished 10-2, lost most of their big playmakers to graduation including senior quarterback Aaron Tobias and his 3,500 passing yards. Seth Baney (77-477, 3 TDs) is the team’s top returning rusher.

The Panthers head north to Warren County to take on the Wolverines, who fell to the Panthers 57-0 last year in Knox.

The Wolverines won’t have any Abraxas players on the roster this fall and they’ll look to Michael Mihalic to run the offense at quarterback. Other players leading the way are linemen Jake Davidson and Cyrus Sears and Garret Waters.