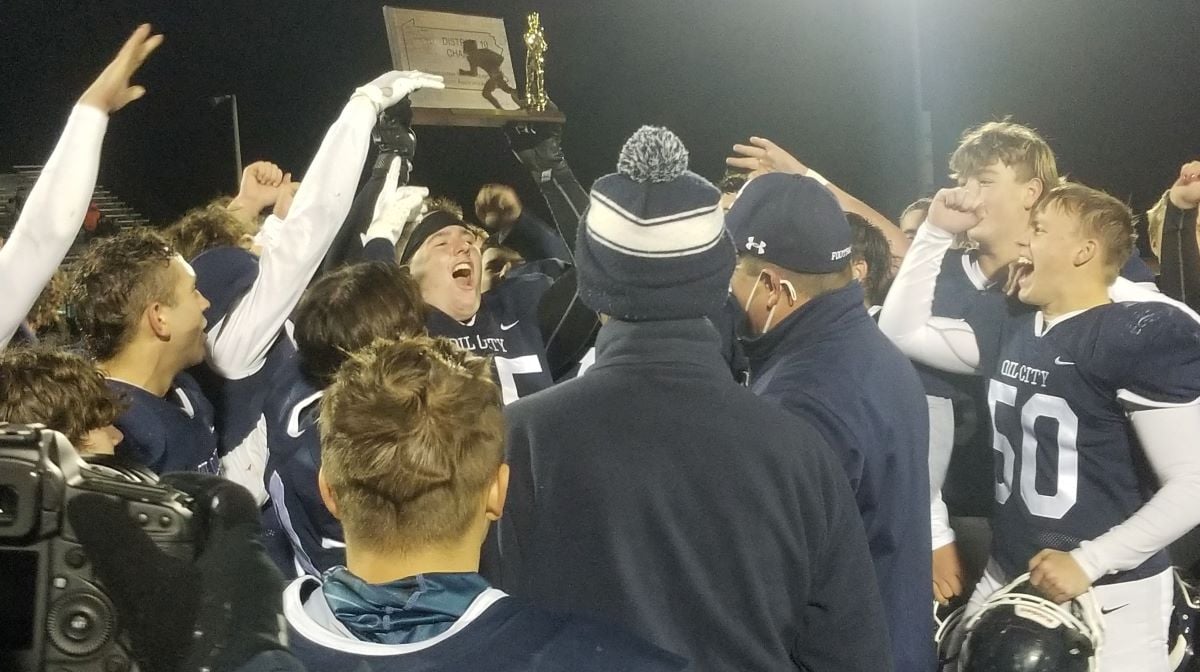 It’s officially championship weekend across District 10 football, with four of the six classifications – 1A, 2A, 4A and 6A deciding their winner.

In Class 3A, it will be semifinal Saturday. While in Class 5A, Cathedral Prep continues its journey through subregional action.

Some of the matchups could have been predicted at the start of the season, while others there have been some surprise.

Here’s a look at how each game stacks up.

Cochranton chose to play a regional only due to relatively low numbers, while Reynolds had to reload after losing a talented senior class to graduation following their D10 title in 2020. Despite those obstacles, the two teams find themselves playing each other for the right to move on to the PIAA playoffs. The Cardinals, who were 0-8 a year ago, are seeking the first D10 title in program history.

The game features two of the top running backs in District 10 in Cochranton’s Jack Martinec and Reynolds’ Jalen Wagner. Martinec has rushed for 1,749 yards and 21 touchdowns, while Wagner has amassed 1,743 yards and 22 scores.

It was a tale of two games last week, as Maplewood held Martinec in check for much of the contest (67 yards), but the Cardinals were able to survive with a 14-12 win, thanks in large part to Martinec’s 57-yard punt return for score. Wagner, meanwhile, ran wild in a 56-27 win over Eisenhower, accounting for 347 yards and five touchdowns on the ground while also adding a receiving touchdown.

The Cochranton defense has posted four shutouts and allowed just 41 points all season. Brayden McCloskey has thrown for 841 yards and 10 touchdowns for the Raiders, four of which have gone to Haydin McLaughlin, who has 371 receiving yards.

For the second-straight season, Farrell and Wilmington will meet for the Class 2A title. Wilmington is seeking its sixth consecutive District 10 title, while Farrell is looking to avenge a 19-14 loss in last season’s title game. The two teams met back on Oct. 8, a 54-0 win for Farrell.

Farrell rolled past Wilmington in the semifinals, while Wilmington broke open a tight game with Northwestern to win 41-21.

In the meeting back in October, Anthony Stallworth ran for 238 yards and three touchdowns, while Wilson added a 79-yard touchdown run and Taidon Strickland a fumble return for a score. As a team, Farrell has nine return touchdowns this season.

Stallworth has rushed for 1,581 yards and 25 touchdowns, or nearly 200 yards per game, while Wilson has 11 touchdown receptions on 527 yards receiving. Kabron Smith and Trian Holden have combined to throw for 19 touchdowns this season, while Omar Stewart Jr. hauled in seven more.

Luke Edwards leads the Wilmington ground attack with 1,118 yards and 16 touchdowns, while Gage DeCaprio had 510 yards and four scores. Tuff McConahy has thrown for 693 yards and nine scores, with Cole McCallister hauling in five touchdown catches and Edwards three.

The winner will face the winner of Windber-Westinghouse next week.

It’s been a whirlwind season for Slippery Rock, which saw several opponents cancel late on them due to COVID-19 issues, nevertheless, the Rockets have earned the top seed and get a date with HIckory in the semifinals, after the Hornets took down Sharon in the quarterfinals, 36-20.

The two teams did meet on Oct 8, a thrilling win for Hickory as Logan Woods connected with Jackson Pryts for a 1-yard score with one second remaining to lift the Hornets to victory. Slippery Rock did lead in that game, 23-13. The duo of the defending D10 champions also had a big game last week, accounting for 155 yards and two scores.

Woods has thrown for 2,102 yards this season and 27 touchdowns. He has a trio of talented playmakers to get the ball to in Pryts (598 receiving yards, 9 touchdowns), Ramarion Whitehead (686 yards) and Keenan Scullin (618 yards).

Slippery Rock, meanwhile, features a very balanced offensive attack, led by William Mokel, who suffered an injury in that Hickory game and hasn’t played since, but could potentially return this week. He has thrown for 863 yards and 12 touchdowns and also has four rushing scores. In his absence, Eli Anderson has thrown for 259 yards and six touchdowns in a pair of wins. John Sabo leads The Rock with 472 receiving yards and eight touchdowns.

The winner will play Fort LeBoeuf or Grove City for the D10 title.

In that game, LeBoeuf held Grove City’s powerful rushing attack in check, while Justin Leuschen ran for 86 yards in the win for the Bison.

Grove City is coming off a 42-7 win over Fairview in the quarterfinals, a game in which they forced four turnovers and rushed for 257 yards. Anthony Nemec had 113 yards rushing and three scores, while Curtis Hovis leads the team with 1,043 yards on the ground and 11 scores.

LeBouef is going to run, run and run some more. Tristin Harris leads the ground attack with 983 yards and 11 scores, while Leuschen (574 yards) and Adam Lichtinger (521) have both eclipsed 500 yards. The Bison closed the season with a loss to Farrell

The winner gets Hickory or Slippery Rock for the title.

Another championship game that features a rematch, as Meadville beat GM 47-7 back on Sept. 3. In that game, Brady Walker rushed for 130 yards and three scores, but he will be unavailable for the duration of the playoffs due to the PIAA transfer rule.

Meadville pulled away late for a 44-10 win over Harbor Creek in the semifinals, while General McLane rallied from an 18-6 deficit early in the fourth quarter to beat Warren, 28-20. In the win over Harbor Creek, the Bulldogs had two late pick 6’s and Khalon Simmons broke free on a 99-yard touchdown run.

The Bulldogs are going to run a ton, and count on them to look to Simmons, who had 216 yards and three touchdowns. On the season, Simmons has rushed for 1,404 yards and 23 touchdowns, while Griffin Buzzell has 1,168 yards and 15 scores on the ground.

It was Nate Danwoski who scored the go-ahead touchdown for the Lancers in their win last week, part of an 88-yard rushing effort. John Amon was held in check for much of the night, but made big plays when he needed to and has accounted for 1,057 yards rushing and 10 touchdowns and has also thrown for 457 yards and five scores, while Dylan Sheeder has 415 yards and five scores through the air as well.

Eric Salamonsen had an interception and fumble recovery for the Lancers last week and is also their leading receiver.

Cathedral Prep has its sights once agian set on Hershey, and they hope to take the more traditional route this time around, which includes a trip to Central Cambria on Friday to take on D6 champion Hollidaysburg.

The two teams met at Dollinger Field a year ago in this spot, a 33-7 win for the Ramblers. As it turned out, that was the only game they got to play, as over the next two weeks, they received forfeits on their way to Hershey. Michael Parks, who rushed for 92 yards in the win last year, has 1,198 yards on the ground in 2021.

Carter Barnes, meanwhile, has been masterful at quarterback, throwing for 1,136 yards and 19 touchdowns and rushing for 440 yards and 12 more scores. Jake McGinnis has thrown for 1,559 yards and 10 touchdowns, while Justin Wolfe (533 yards, 3 touchdowns) is among several targets he has at his disposal. McGinnis also leads the ground game with 538 yards and eight scores.

McDowell and Butler will meet for the D10 title after McDowell earned a 38-21 win over the Golden Tornado back on Sept. 18.

In that game McDowell’s Artis Simmons ran for 240 yards and three scores, while Butler’s Mac Schnur threw for 300 yards, 192 of which went to Lance Slater.

On the season for McDowell, Simmons leads with 780 yards on the ground and 10 scores, while Christian Santiago also has 10 rushing touchdowns. Ben Moore has thrown for 995 yards and nine touchdowns to seven different receivers.

Cooper Baxter will be back in this game for Butler, and he leads the Golden Tornado ground attack with 352 yards and six scores. Schnur has thrown for 1,179 yards and seven scores, while Ethan Trettel has 512 yards receiving and four scores.

2021 District 9 and District 10 Week 12 Football Predictions
D9 playoffs: Bison vs. Bisons as Janocko goes for 300th
This website or its third-party tools process personal data.In case of sale of your personal information, you may opt out by using the link Do not sell my personal information.
×
Manage consent