Fifth-Seeded Warren Knocks Off No. 4 Fairview in D10 Class 4A Quarterfinals 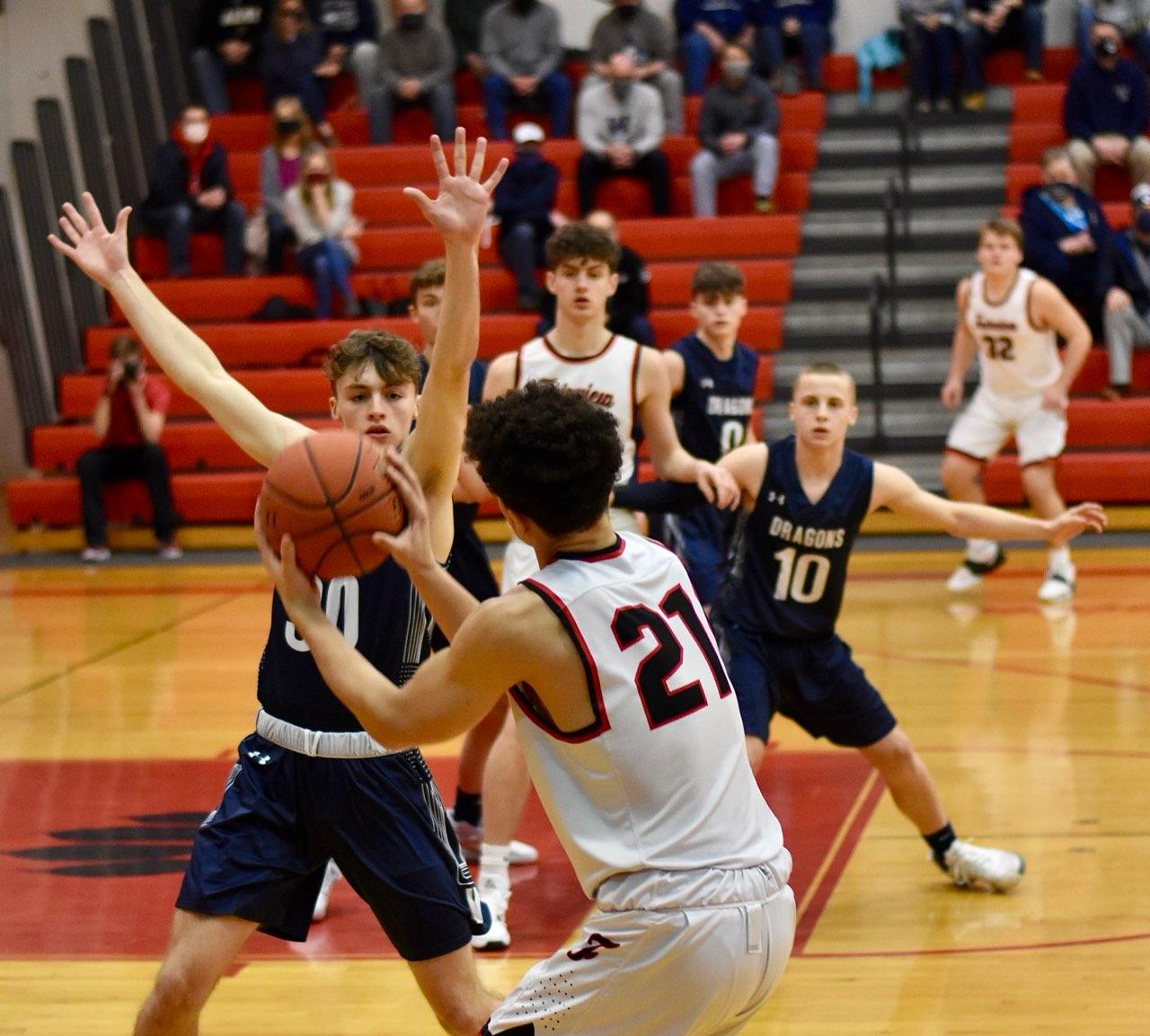 FAIRVIEW, Pa. – The third time proved to be the charm for the Warren Dragons.

After losing to Fairview twice in the regular season, the No. 5 seed Dragons got the best of the fourth-seeded Tigers, 46-40 in the D10 Class 4A quarterfinals on Friday at Fairview High School

“We wanted to set a tone,” said senior Ben Berdine. “We came out, we played hard, we got the lead and we kept it.”

The Tigers didn’t just beat the Dragons twice, they did so decisively by margins of 23 and 31 points.

“I thought we had some confidence because we knew in watching the film that we did not play well against them either time,” said Warren coach Jeff Berdine. “They took us out of what we wanted to do offensively. And we changed what we did offensively for this game.”

Ben Berdine was fouled on the ensuing possession and calmly knocked down a pair of free throws.

Warren and Fairview players, including James Sitter (21), JT Blum (14) and Tyler Shultz (23) box out on a free throw attempt. Photo by Jon Sitler.

After the Tigers (14-8) missed a 3 on the other end, freshman Tommy Nyquist, who was brilliant in the second half, was fouled with 20.7 seconds remaining and knocked down two more from the charity stripe to seal the game.

Warren never trailed in the game and led by six, 21-15 at halftime, but Fairview, as good teams do, responded.

The Tigers twice tied it in the third quarter, first on a layup by Tyler Shultz at 22 and again on a James Sitter old-fashioned 3-point play.

Each time, the Dragons’ young guards had an answer. First, it was Ordiway hitting a 3, then it was Nyquist’s turn to connect from distance.

“I thought they grew up some tonight,” Berdine said of Ordiway, a sophomore, and Nyquist.

Ordiway, who knocked down four 3’s on his way to a game-high 16 points, talked about the win afterward.

“If teams are making shots, you can’t get rattled,” Ben Berdine said. “You have to stay with it. They made a couple of shots, but then we made some shots and we got stops.”

The Dragons’ zone defense limited Fairview’s offense early in the game, and Barnes and Ordiway were hot from the outside, with a Barnes 3 giving Warren its biggest lead of the half, 20-13 late in the second quarter off a nice find from JT Blum.

“They try really hard to get the ball inside and we were able to take that away from them tonight,” coach Berdine said. “I thought in the second half we did a much better job on the glass because they’re such a good rebounding team.”

Added Nyquist: “We started out in 2-3 zone and offensively we hit a lot of shots. We ran our offense well, penetrated and shot the ball well as a group.”

Barnes, a senior who missed a good bit of the regular season after suffering a shoulder injury against Oil City, has been stellar since coming back, something that isn’t lost on his coach.

“Payton coming back is a huge lift to us, a huge shot in the arm,” coach Berdine said. “Having him come back, his leadership, his confidence is huge.”

The Tigers started the second half on a 7-1 run that allowed them to tie the game before Ordiway and Nyquist knocked down their 3s.

Shultz cut the deficit back to one with his putback late in the third, but Nyquist countered with another triple and hit 1-of-2 from the free-throw line to stretch the lead back to five, 32-27 going into the fourth.

Shultz scored five of his team-high 13 points in the third quarter, while Logan Frazao finished with nine and Sitter eight for the Tigers.

Berdine had seven rebounds to go along with his 10 points and Nyquist and Barnes finished with nine points each for the Dragons.

Smith Leads Franklin Second-Half Charge in Playoff Win Over Seneca
2021 District 10 Girls’ Basketball Playoff Primer
We use cookies on our website to give you the most relevant experience by remembering your preferences and repeat visits. By clicking “Accept All”, you consent to the use of ALL the cookies. However, you may visit "Cookie Settings" to provide a controlled consent.
Cookie SettingsAccept All
Manage consent