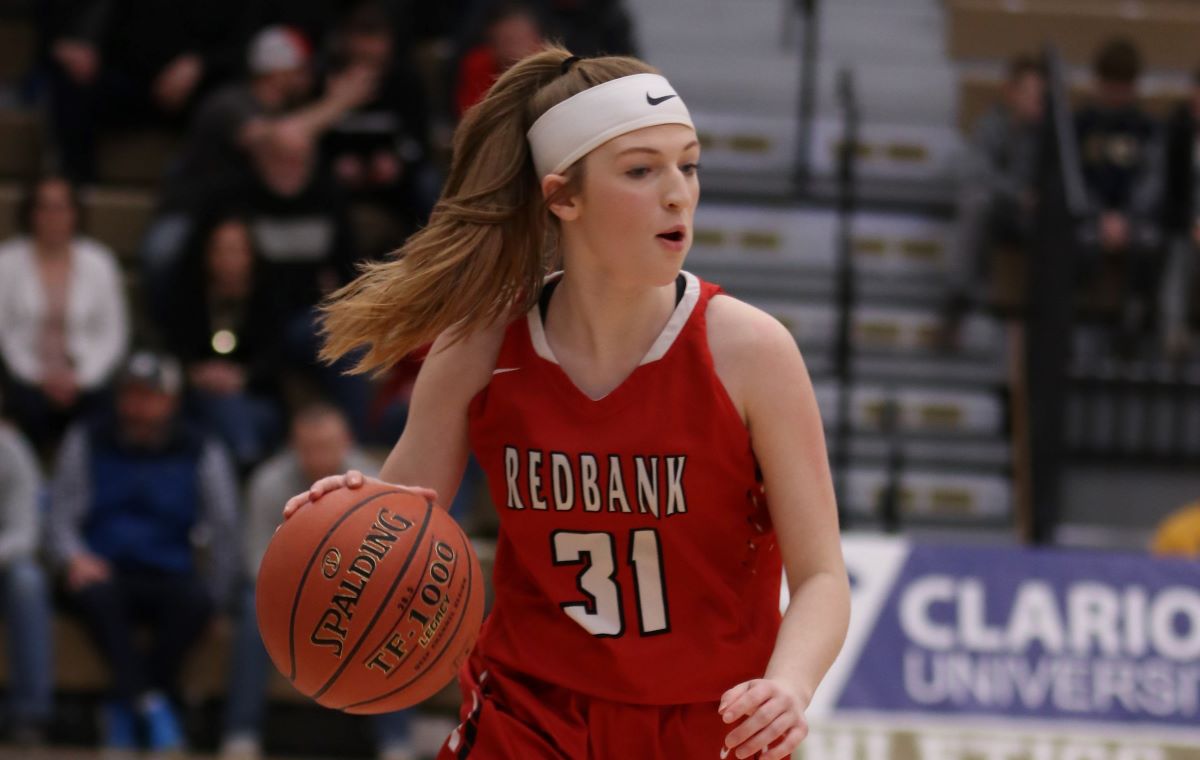 Caylen Rearick tied the Redbank Valley school record for 3-pointers in a game with seven on her way to a career-high 27 points Friday night. Photo by Jared Bakaysa of JB Graphics. See more of Bakaysa's work here

The Golden Damsels trailed 48-41 after three quarters thanks to a 25-11 third quarter by the Lady Lions.

But Dominika Logue scored six of her 17 points in the fourth quarter to help fuel the comeback.

Anna Kennemuth scored six of her team-high 14 points in the third quarter for C-L with the Lady Lions also getting 13 points each from Sydney Simpson and Frances Milliron and seven apiece from Kendall Dunn and Lexi Coull. All seven of Coull’s points came in the third quarter.

NEW BETHLEHEM, Pa. – Caylen Rearick tied the school record with seven 3-pointers on her way to a career-high 27 points, as Redbank Valley rolled past visiting Clarion, 52-22.

Rearick drilled three long balls in the first quarter alone and scored 13 points in the quarter to help the Lady Bulldogs to an early 15-2 lead that grew to 22-5 by halftime. She tied the school mark for three previously done three times – once each by Amy Hepler, Lexi Holt, and Tara Hinderliter.

WEST SUNBURY, Pa. – Keystone built a 19-point halftime lead and got the lead to 21 in the second half before holding off a late Moniteau rally to get a 55-44 win.

The Lady Panthers behind 10 points from Danae Hurrelbrink and nine from Natalie Bowser led 31-12 at halftime and got the lead to 21 on three occasions in the second half – the latest at 41-20 – before Moniteau was able to rally to within eight 51-43 with 1:25 to go.

Hurrelbrink was named the Allegheny Grille of Foxburg Player of the Game and talked about the win.

Aslyn Pry had a game-high 21 points and 14 rebounds for Moniteau with Catherine Kelly adding seven points.

FOXBURG, Pa. – Mia Sherman hit four 3-pointers on her way to a team-high 14 points helping A-C Valley to a 36-29 win over Venango Catholic.

Andrea Meals added eight in the win for the Lady Falcons.

FRILLS CORNERS, Pa. – Returning to the court for the first time since Jan. 26, North Clarion had 10 different players score in a 48-18 win over visiting Forest Area.

Feb. 5, 2021 District 9 Boys’ Hoops: ECC Pulls Away from Ridgway; Union Rallies Past C-L; Cameron Co. Defense Wins the Day
Austin’s Glover Scores 1,000th Career Point in Win at Northern Potter
This website or its third-party tools process personal data.In case of sale of your personal information, you may opt out by using the link Do not sell my personal information.
×
Manage consent