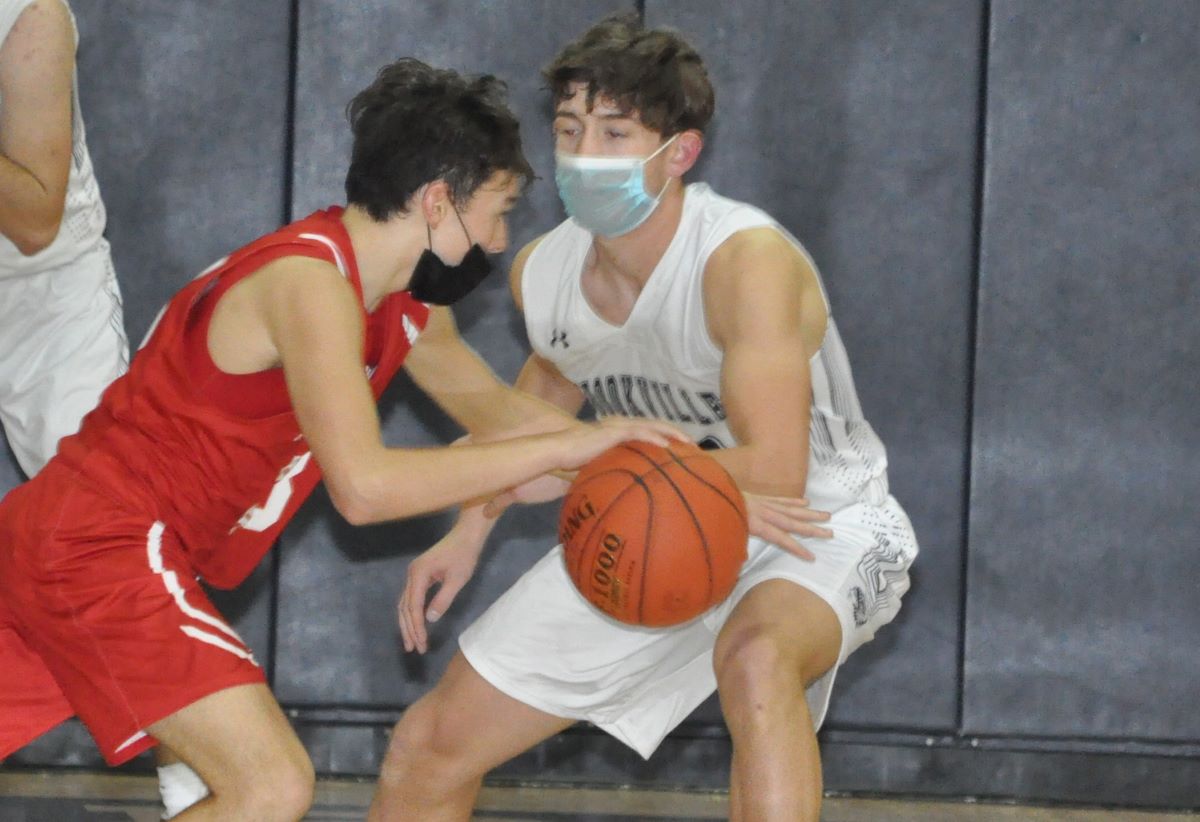 Griffin Ruhlman of Brookville playing defensive earlier in the season came up with 22 points, including the game-winning basket, Thursday for Brookville

HYDE, Pa. – Griffin Ruhlman’s layup off a pass from Jace Miner with 9.2 seconds to play gave visiting Brookville a 54-52 win over Clearfield.

Miner came up with a huge steal with 30.5 seconds left to set up the winning play for the Raiders after Clearfield tried to hold for the final shot after a basket by Ruhlman with 1:08 to go had tied the game at 52.

Cole Miller’s desperation 25-foot 3-pointer at the horn was short for Clearfield.

It was a back-and-forth final three minutes.

Karson Rumsky gave Clearfield a 50-48 lead with 2:41 to play before Robert Keth secured an offensive putback at the 2:09 mark to tie the game at 50.

Clearfield went back ahead, 52-50, when Rumsky connected on a shot with 1:33 to play following an offensive rebound by the Bison before Ruhlman tied the game after another offensive board by Brookville.

The Bison, who were down two, 31-29, at halftime, trailed 43-36 going to the fourth quarter before rallying to take the lead.

Ruhlman had a game-high 22 points for Brookville, eight of those points came in the fourth quarter, with Keth adding 12, including eight before halftime, and Miner scoring 11, seven before the break.

Rumsky led Clearfield with 20 points, eight in the fourth quarter, and went over 900 points in his career (906), while Miller added 19 points and five rebounds.

Srock led the Cardinals with 11 points with Kosko adding 10.

FOXBURG, Pa. – Broc Weigle hit five of six 3-pointers on his way to a team-high 15 points to help A-C Valley to a 79-42 win over visiting Portersville Christian.

Also reaching double digits for the Rockets were Owen Winter and Nate Myers, who each scored 12 points, Dawson Booher, who tallied 11 points, and Ethan Taylor who scored 10.

Trevor Lansberry paced Curwensville with 19 points with Scott Condon adding 10 for the Golden Tide, who were without leading scorer Ty Terry.