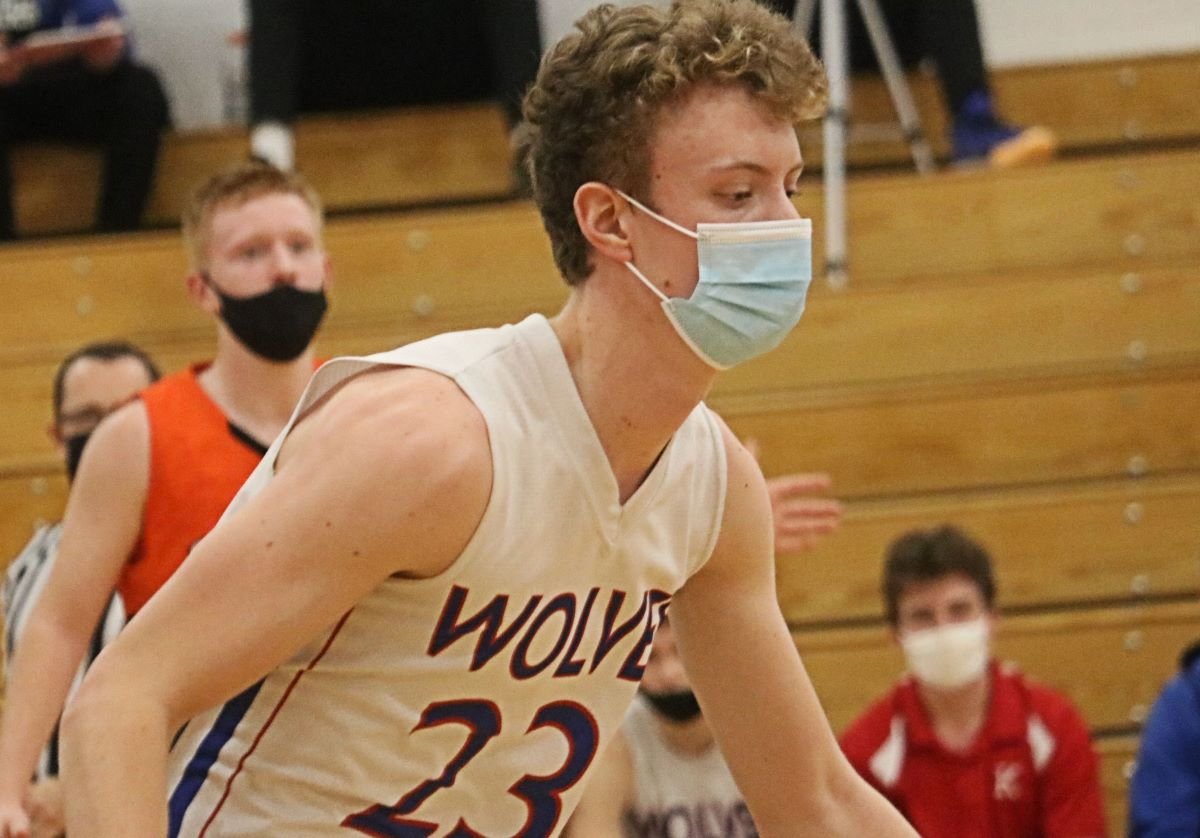 Josh Greville’s driving layup down the middle of an undefended lane with 50.4 seconds left put Kane up for good, 44-43, and Matt DeLuca hit three of four foul shots in the final 32 seconds to seal the victory.

Greville got the basketball on a quick outlet from Zuke Smith, who had a rebound of a missed free throw by Jefferson Freeburg fall basically into his lap. Greville then pushed the ball up the court and found the middle of the lane left unguarded, which he took advantage of for the go-ahead layup.

Watch the play via the Johnsonburg Facebook Live video of the game. The sequence, starting with the Freeburg missed free throw, starts at the 2:43:56 mark of the video.

Gabe Watts had a chance to put Johnsonburg back in front with 34 seconds left, but his nine-foot, turnaround jumper in the lane was short.

DeLuca grabbed the rebound, was fouled, and hit the first free throw with a little luck as the ball bounced twice off the rim, then hit the glass before falling through. He missed the second, but Kane led by two, 45-43, with 32 seconds left.

After a kicked ball with 16 seconds to play and a timeout, Freeburg got a good look from the left corner with around 10 seconds to play from 3-point range to give the Rams the lead. But his shot was too strong, and DeLuca gathered the rebound and was fouled.

DeLuca then proceeded to hit both free throws to salt the game away.

Eric Christoff had given Johnsonburg a 43-34 lead when he grabbed an offensive rebound and put the shot back in with 5:31 to go. The Rams then forced a jump ball, with the possession arrow in their favor, on the inbounds pass but missed a shot that would have extended the lead to double digits.

The Kane comeback then started when Smith hit one of two free throws off an offensive rebound with 5:11 to go.

Carson Whiteman followed with a coast-to-coast breakaway layup with 4:33 left to make it 43-37, and then DeLuca buried a 3-pointer from just outside the left corner with 3:08 left to make it 43-40. Watch DeLuca’s shot at the 2:37:47 mark of the above video.

Whiteman then had a spectacular coast-to-coast layup with 2:36 left to make it a one-point game. His layup was a behind-the-back shot that can be viewed at the 2:38:17 mark of the above video.

RIDGWAY, Pa. – Elk County Catholic withstood an upset attempt from homestanding Ridgway picking up a 39-33 win in a game the Crusaders never led in until the final 1:13.

But the Crusaders finished the game on an 11-0 run that started when Charlie Breindel hit a 3-pointer from the left elbow with 3:41 to go.

The Breindel triple came off a Jordan DePrator rebound of a missed Luke Jansen 3-pointer.

You can watch the play and the entire game courtesy of The Hound, 97.5 FM, which did a Facebook Live feed of the game. The Breindel 3-pointer came at the 1:05:14 mark of the video.

Up 33-31, Ridgway had ample opportunity to keep or expand the lead but turned the ball over on three consecutive possessions.

The final turnover was caused when Breindel poked the ball away from Jack Benninger into the hands of Mark Kraus. Kraus then gave the ball back to Breindel, who looked like he was going in for the layup. But, at the last second, Breindel passed to Luke Jansen. Jansen scored on a layup, was fouled by Bon, and hit the free throw with 1:13 to go to give ECC the lead, it’s first fo the game, 34-33. Watch the sequence starting at the 1:10:15 mark of the above video courtesy of The Hound.

Park had a chance to give Ridgway the lead back, but his foul-line jumper with 53 seconds left was too strong, and Jansen scored on a fast-break layup off a DePrator pass to make it a three-point game 36-33.

Benninger then missed a driving layup with 12.6 seconds left, and Breindel hit one of two charity shots with 9.8 to go to make it a two-possession game.

Park had a game-high 21 points for Ridgway with Dom Allegretto adding seven.

WEST SUNBURY, Pa. – A strong third quarter helped visiting Punxsutawney overcome a three-point halftime deficit on its way to a 59-52 win at Moniteau.

The Chucks trailed 23-20 at halftime but outscored the Warriors 15-6 in the third quarter behind six points from Andrew Young and five from Ryan Heigley.

The Raiders led 41-20 at the break thanks to eight points each from Hunter Geer and Danny Lauer.

The lead maintained at 20 points, 51-31, going to the fourth quarter before DCC made a bit of a run thanks to a 10 points from Alec Srock.

Jace Miner led Brookville with 15 points, including his 11th dunk of the season.

Griffin Ruhlman added 12 points for the Raiders with Geer scoring 10 and Robert Keth and Lauer eight each.

Srock led DCC with 14 points thanks to his late surge with Jalen Kosko adding 13 points and Damon Foster eight while hitting a pair of 3-pointers.

Skyler Roxbury added 18 points for the Golden Knights with Karter Vogle chipping in 10.

FOXBURG, Pa. – Trailing by five at halftime, A-C Valley turned to its star, Levi Orton, to lead them to a 72-58 comeback win over visiting North Clarion.

The Falcons trailed 34-29 at the break but Orton scored 20 of his game-high 33 points in the second half to lead the comeback.

Orton, who added 10 rebounds and five steals, netted 10 of those points in a 23-point third quarter that helped A-C Valley take a 52-46 lead into the final eight minutes.

Broc Weigle, who added six points in the win, hit a pair of 3-pointers during the third-quarter surge.

Freshman Jay Clover continued his strong play with nine points and 10 rebounds, including seven in the first quarter, for A-C Valley.

Collin Schmader hit three 3-pointers and scored a team-best 15 points for North Clarion but was held to just two after the break.

ULYSSES, Pa. – Led by 14 points from AJ Gleason, Bradford had four players score in double digits on its way to a 58-22 win at Northern Potter.

Cam Austin added 13 points for the Owls with Dalton Dixon and Jake Franz each scoring 10.

Gleason also had six rebounds, as did Alex Liners and Franz. Franz dished out four assists and Dixon handed out three helpers.

SENECA, Pa. – Getting 54 of their 75 points from the three-some of Bryson Bain, Chris Marshall, and Marquese Gardlock, visiting Redbank Valley rolled past Cranberry, 75-43.

KARNS CITY, Pa. – Behind a career-high 32 points from Nathan Waltman, Karns City quickly puts its second loss of the season behind it with a 77-29 trouncing of visiting Forest Area.

Waltman surpassed his previous career-best of 31 points set during his sophomore season (Jan. 25, 2019 vs. Redbank Valley) by scoring 26 first-half tallies to help the Gremlins to a 54-14 halftime lead. Waltman added eight rebounds.

Payton Barnes and Alex Borger each chipped in eight points for the Dragos.

Clarion, which has dropped four in a row, was paced by 12 points from Beau Verdill with Cal German adding 11 and Hunter Craddock seven.