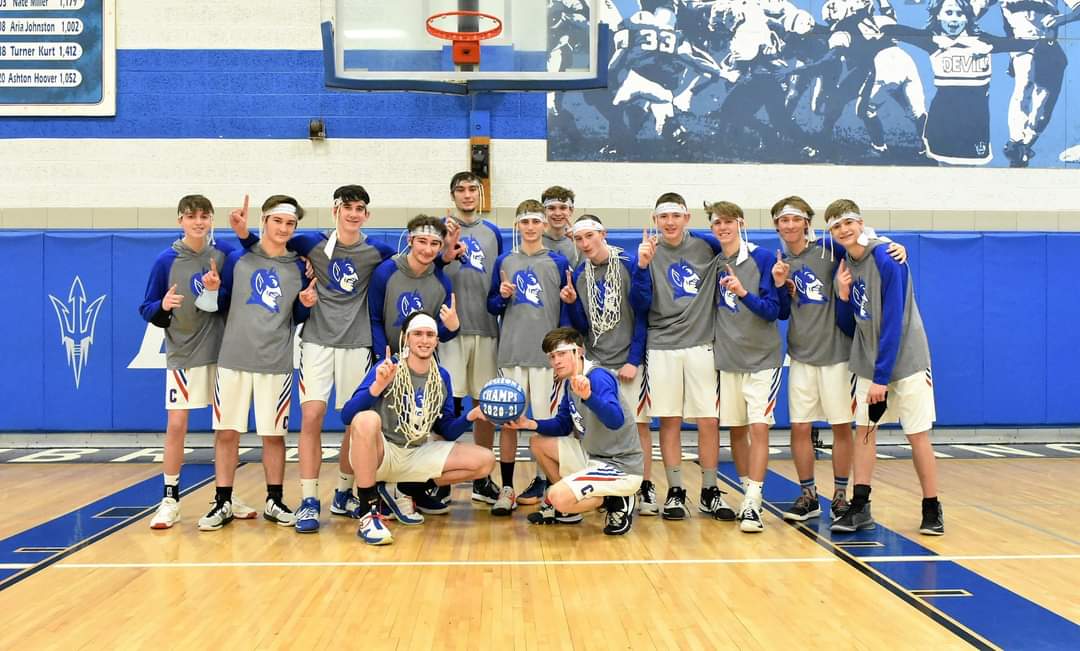 Cambridge Springs led 37-36 going into the fourth quarter and went on to outscore the Cardinals 13-3 over the final eight minutes.

Hunter Spaid also had a strong game for the Blue Devils with 16 points and Trent Wheeler seven.

Payton Barnes and Alex Borger each chipped in eight points for the Dragons. Barnes also had five assists, as did Tommy Nyquist.

Clarion, which has dropped four in a row, was paced by 12 points from Beau Verdill with Cal German adding 11 and Hunter Craddock seven.

Lookenhouse scored 15 points in the first half and 10 in the second half, while Caleb Robinault added 13 points, including three 3’s, while Owen Trumbull added seven points.

Kibbe knocked down five 3’s on the night.

Bobby Yost added 13 points for the Bobcats, while Evan Shouey scored 10 of his 12 in the second half.

The Bobcats overcame a big night from Union City’s Matthew Bennett, who scored 30 points. Bennett knocked down six 3’s in the game and was 8-of-11 from the free-throw line.

LINESVILLE, Pa. – Corry outscored Conneaut by 19 points in the second half en route to a 50-34 victory.

Logan Joncas connected on a game-high 17 points for the Beavers, while Nick Brundage added 12 and Rylan Smith 11.

FAIRVIEW, Pa – Meadville outscored Fairview 13-2 in the fourth quarter on its way to a 55-48 non-region showdown victory.

Jackson Hower had 17 points for the Trojans and Mason Beck 12.

SHARON, Pa. – Brayden Coxson poured in 28 points as Sharon powered past the Academy for Urban Scholars, 82-46.

Otis Driver netted 19 points and Brett Salsgiver 18 for the Tigers.

Miller scored seven points for the Sailors, while Gavin Grantham had a team-high 10 and Isaac Lightcap nine.

RUSSELL, Pa. – Eisenhower outscored Sheffield 13-6 in the fourth quarter on its way to a 35-31 victory over the host Wolverines.

Emily Foster scored 14 points for Sheffield, including a 6-for-6 effort from the free throw line.

Lauren Schneider added 10 points for the Bobcats, who outscored the Eagles 36-10 in the second half.

Carlie Beatty added 13 points and each rebounds for the Big Reds, while Emma Mild netted 12 points.

Kayden Bird and Nicole Rimel added six points each for the winners.