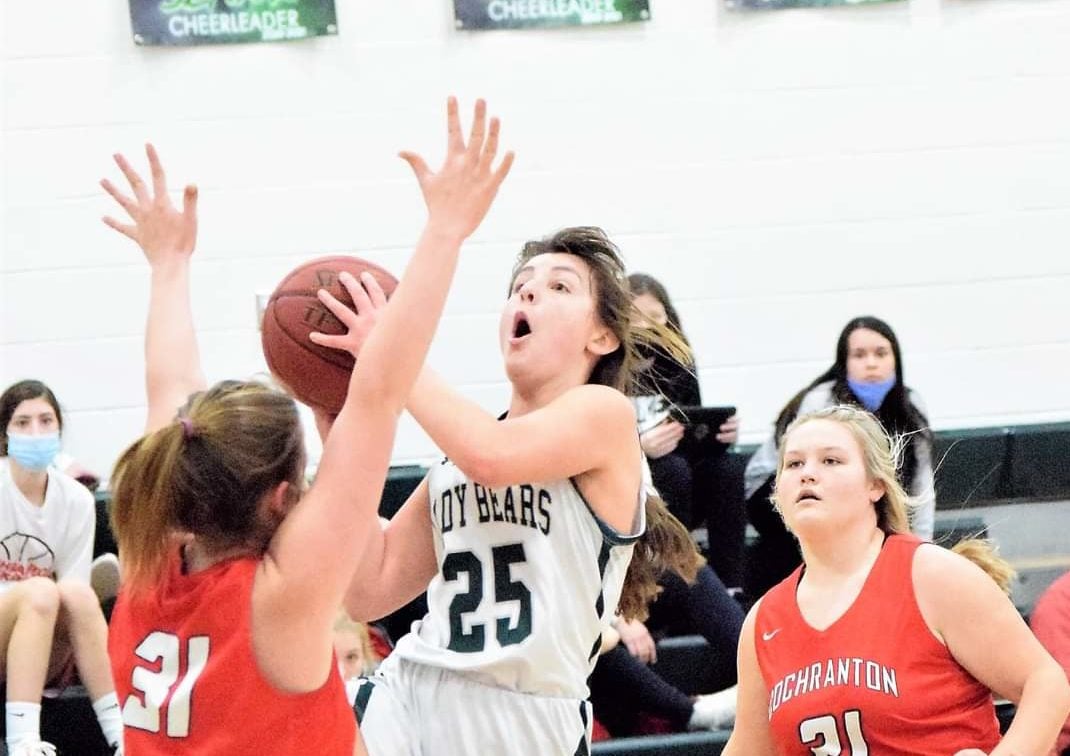 Emma Ruhlman had 13 points and pulled down 13 rebounds for the Dragons, while Riley Childress had 11 points and five steals.

The duo talked about the win afterward:

Jaylin McGill had 16 points for Cochranton and Lexie Moore 12.

YOUNGSVILLE, Pa. – Maddie Yanc scored 17 of her 23 points in the first half as Cambridge Springs powered past Youngsville, 47-14.

Jordyn Wheeler chipped in with 10 points for the Blue Devils.

Kenzie Olewine and Taylor Carrington had four points each for Youngsville.

Farrell outscored Reynolds 36-20 in the second half en route to the win.

In the first game, Rylee Kaspar scored 11 points and Lily Pulvino nine for the Huskies.

Hess netted 22 points in the second game to help the Lancers earn the split. Ellie Shade added 13 for GM.

McDowell outscored Erie 28-11 in the second half en route to the win.

FRANKLIN, Pa. – Hickory built a 15-point halftime lead and held off a furious Franklin rally in the second half to win their Region 4 showdown, 52-49.

Peyton Mele had another strong game for the Hornets, scoring 21 points, including 7-of-7 from the free throw line and seven points in the fourth quarter.

Easton Fulmer scored 10 of his team-high 19 points in the fourth quarter for the Knights, while Luke Guth finished with 11 points.

Eisenhower led 36-32 going to the fourth quarter before Sheffield fought back on the strength of a balanced scoring effort that saw four different players score four points in the quarter.

Nolan Alabaugh and Lucas McNeal each added eight points for the Wolverines.

Wyatt Lookenhouse led all scorers with 18 points for Eisenhower with Calen Robinault chipping in 15 points and Owen Trumbull 10.

Joncas was one of four Corry players in double figures, as Nick Brundage netted 16 points, Tucker Clark 15 and Rylan Smith 11.

Joe Mack and Dominic Dell had 12 points apiece for Youngsville.

OIL CITY, Pa. – Eleven different Oil City players made their way into the scoring column as the Oilers beat Titusville, 75-27.

Jake Hornbeck led the Oilers with 16 points, while Robert VanWormer had 15 and Devy Goff 11.

The Eagles outscored the Tigers 15-4 in the third quarter on its way to the win.

Anthony Reed had 13 points and Mason Reed 12 for Wilmington.

The Raiders outscored the Muskies 53-45 in the second half en route to the win.

Peyton McElhinny had 19 points and Cameron Keyser 11 for Jamestown.

Omar Stewart and Jaiman Holden added 10 points each for the Steelers, who led 31-19 at halftime.

Jake Mattocks had 20 points for Mercer and Logan Turton 17.

Sam Howell netted 14 points and Casey Smith 10 for the Huskies.

Mason Kroniser had 15 points for Conneaut.

Delaunte Lane had 14 points for Conneaut.