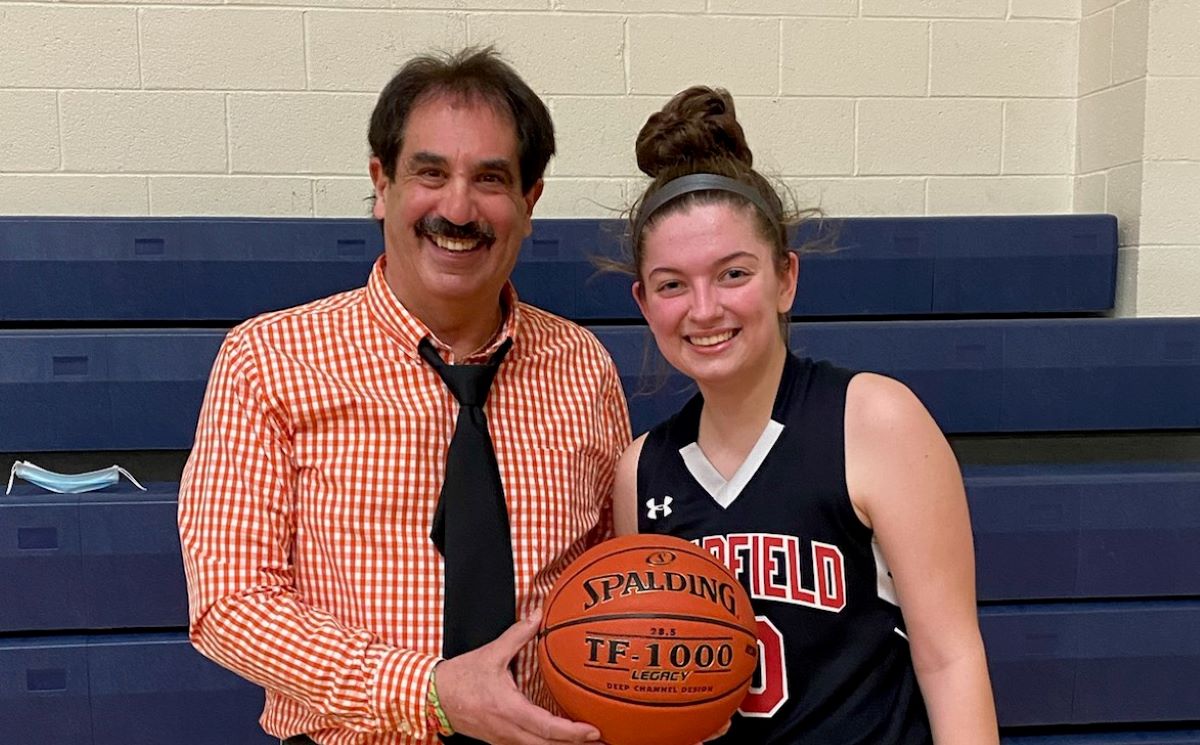 Union trailed 38-22 late in the third quarter and 41-26 going to the fourth quarter.

But the Golden Damsels went on a 19-4 run in the quarter to tie the game on a Hailey Kriebel layup off a Logue pass with 41.3 seconds left. Watch the shot on Union Golden Damsels YouTube.

The run started with Union scoring the first nine points to cut the Karns City lead to 41-35.

Rossi McMillen stopped the bleeding for a moment when she hit two free throws to make it 43-35.

Karns City then tied up Union with the possession arrow in favor of the Lady Gremlins. But the Golden Damsels forced a five-second call that led to a 3-pointer from Kriebel with just under three minutes left to make it 43-38.

Logue then made it 43-40 with 1:45 to go before Emma Johns restored the Karns City lead to five with a pair of free throws with around 1:15 to go.

Logue answered with a quick old-school 3-point play to make it 45-43 with just over a minute to go, and Kriebel tied the game.

A shot at the horn by Karns City was just off the mark sending the game to overtime.

In overtime, Johns gave the Lady Gremlins a short-lived 46-45 lead with a free throw before Logue scored a layup to put Union up for good, 47-46.

Logue then hit 4 of 6 free throws to expand the advantage to 51-46 with under 30 seconds left.

DUBOIS, Pa. – With a 3-pointer with 1:50 left in the first quarter, Megan Durandetta became Clearfield’s all-time 3-point leader, and the Lady Bison went on to pick up a 56-44 road win over DuBois Central Catholic.

Durandetta came into the night needing one triple to break the school’s career mark of 161 set by 2000 graduate Amanda Swanson.

The senior sharpshooter went on to hit a second 3-pointer in the second quarter and finished the night with six points and 163 career 3-pointers.

Emma Hipps led the way for Clearfield, which led 28-15 at halftime after a 23-point second quarter, with 18 points and four assists with Riley Ryen adding 15 points and five helpers and Paige Rhine 10 points and 12 rebounds.

DUBOIS, Pa. – Madison Rusnica and Olivia Johnson each scored six fourth-quarter points to help DuBois erase a six-point deficit heading to the quarter and get a 50-41 win over visiting Moniteau.

Moniteau led 38-32 after three but was outscored 18-3 in the fourth with Rusnica hitting a 3-pointer, a 2-pointer, and a free throw, and Johnson hitting one two and going 4 of 6 from the line in the quarter.

Aslyn Pry had a monster game for Moniteau with 25 points and 15 rebounds. Catherine Kelly added 10 points.

ST. MARYS, Pa. – Visiting Cameron County built a seven-point fourth-quarter lead and then held off a strong comeback attempt by St. Marys to pick up a 46-42 win.

The victory turned around a 21-point loss by the Lady Raiders to St. Marys in Emporium Feb. 6 when the Lady Dutch won 50-29.

Wednesday night, Cameron County used a 5-1 spurt early in the fourth quarter to take a 38-31 lead on a Mallory McKimm free throw with 4:39 to go.

Kyla Johnson then got the Lady Dutch within one, 40-39, with a basket with around three minutes left, but that was as close as St. Marys got.

Samantha Hayes had a shot at an old-school three moments later but missed the free throw leaving St. Marys down 43-41.

The Caskey sisters – Izzy and Maura – then had four chances to score in quick succession but missed the shots. Izzy, however, was fouled on her last attempt and made a free throw to get the Lady Dutch back within one, 43-42, with 59 seconds to play.

Izzy Caskey then had a layup bounce out with around 40 seconds left that would have given the Lady Dutch the lead, and Bresslin hit a pair of free throws with 33.7 to go to make it 45-42.

Up three, Cameron elected to send St. Marys to the line, and it paid off when Maura Caskey missed the front end of a one-and-one. Bresslin then hit one of two charity shots with 14.2 seconds remaining to put the game away.

Hilfiger had a double-double for Cameron County with 14 points and 11 rebounds. Bresslin added 12 points and six assist, Lorenzo, who was a perfect 4 of 4 from the field, added eight points and 10 rebounds, and Reggie Goodrow scored nine points while going 3 of 3 from 3-point range.

CLARION, Pa. – In a low-scoring affair, Redbank Valley overcame a one-point deficit heading to the fourth quarter and picked up a 29-28 road win over Clarion.

The Lady Bulldogs, who played without Alivia Huffman, trailed 24-23 going to the final eight minutes but got baskets from Claire Clouse, Caylen Rearick, and Katie Davis to secure the win.

It was Redbank Valley’s second win over Clarion in 19 days with the Lady Bulldogs rolling to a 52-22 win Feb. 5 in New Bethlehem.

JOHNSONBURG, Pa. – A 29-point afternoon from Hannah Lary helped Bradford get a 63-53 win at Johnsonburg.

Kalie Dixon added 14 points for the Lady Owls with Alanna Benson chipping in 13.

Kaci Stelene had a big game for Johnsonburg with 22 points and 13 rebounds.

Selena Buttery chipped in 12 points and 11 rebounds for the Lady Rovers who also got eight points, four rebounds, and three steals from Ciara Morelli and two points and eight rebounds from Nikki Baker.

Eden Wonderling added 11 points in the victory for the Lady Raiders.

Sydney Alexander had a game-high 17 points for ECC with Tori Newton adding 10.