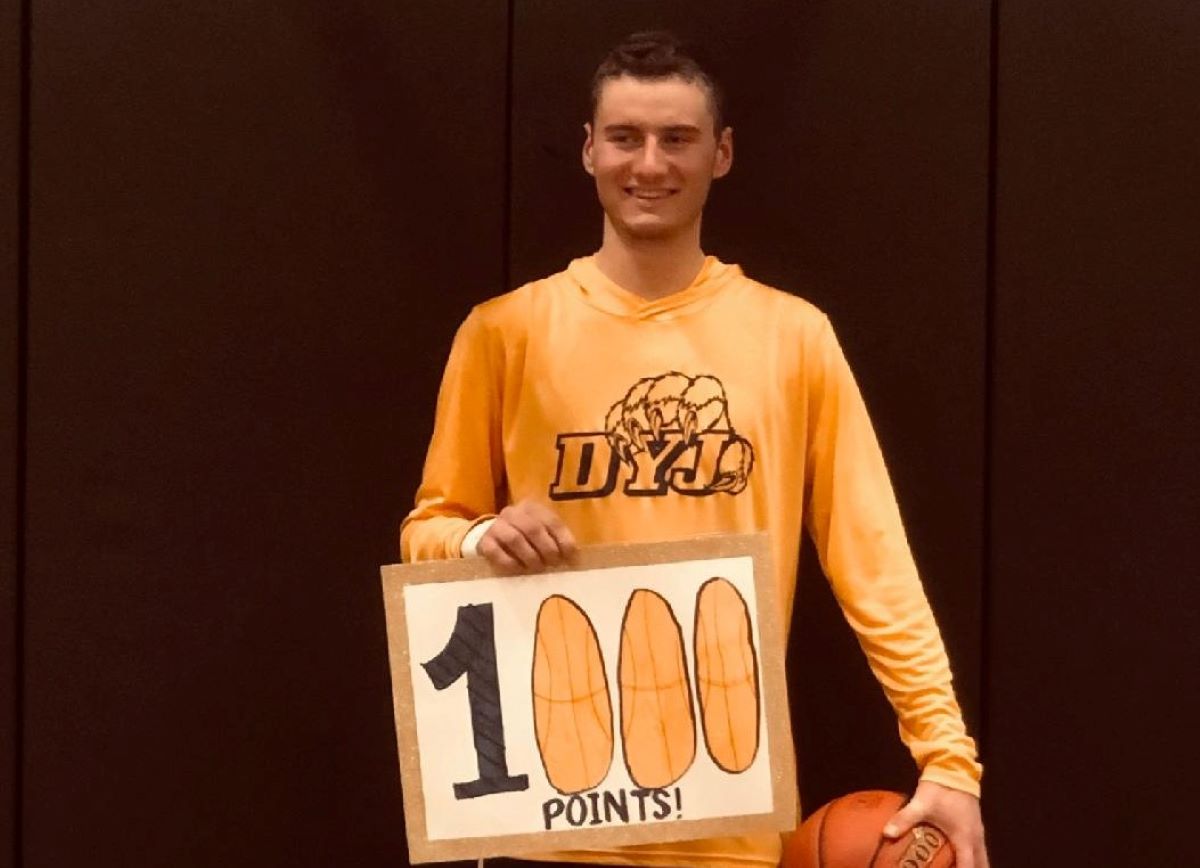 AUSTIN, Pa. – With a 3-pointer early in the fourth quarter of a 44-43 win at Austin, Northern Potter’s Carter Anderson became the first Panther to score 1,000 career points in 25 years.

Anderson was the triggerman under the hoop and leaked out to the left corner where he received the ball back and nailed the shot that gave him 1,000 points exactly, the final points he scored on the night.

Anderson is the first Northern Potter boys’ player to score 1,000 point since Joshua Kosa in 1996. He is also only the fourth known player in school history to reach 1,000 joining Donald Thompson (1982) and Robb Cowburn (1987).

Anderson talked with D9and10Sports.com’s Chris Rossetti about the milestone

While Anderson’s milestone was one of the highlights of the game, it wasn’t the only one.

Tre Slawson won the game for Northern Potter when he connected on a short jumper in the lane with 27.3 seconds left off an inbounds pass from Tanyon Brown.

Brown had saved the day for NoPo when he threw the ball off an Austin player as he was going out of bounds on a rebound of a teammate’s missed shot.

Slawson then cut the hoop from the 3-point circle on the inbounds and took the 1-foot jumper for the lead.

Austin had a chance to tie the game or retake the lead when Ayden Nicka was fouled by Slawson with 8.9 seconds left attempting a layup.

Nicka’s first shot, however, rattled in and out and his second shot was too strong with Brown securing the rebound for Northern Potter.

Brown was fouled with 6.8 seconds left, but Northern Potter wasn’t in the bonus yet.

Anderson was then fouled with 5.7 seconds left, the seventh team foul on Austin.

Anderson, however, missed the free throw, and Austin called time out with 4.4 to play.

Austin rushed the ball up court, but couldn’t get a shot off before time ran out.

The home team trailed by five, 42-37, with under three minutes to play but went on a 6-0 run that was capped by a Nicka basket in the post off a Cameron Rees feed with 57.7 seconds left to take a 43-42 lead.

ST. MARYS, Pa. – Thanks to the sharpshooting of Camdyn Allison in the fourth quarter, visiting Cameron County rallied from a seven-point second-half deficit to beat St. Marys 37-31.

The Red Raiders trailed 24-17 following a Bryce Walker jumped with around 50 seconds left in the third quarter but went on a 12-1 run that featured a pair of 3-pointers from Allison, who also hit a pair of free throws in the spurt.

That gave Cameron County a 29-25 lead with just over a minute left in regulation.

You can watch Allison’s second 3-pointer at around 2:35 of the fourth quarter via St. Marys’ Facebook Live stream of the game at this link. The basket comes at the 2:21:14 mark of the video.

Down four, St. Marys didn’t back down.

Then, after Hayden Brown missed a free throw, Mitchel Reiter grabbed an offense rebound and put it back in to tie the game at 29 (it can be viewed at the 2:28:01 mark of the above video link).

Lasko, however, fouled Caden Beldin thinking St. Marys was still down, but Beldin bailed Lasko out by missing the free throw and the game ended up going to overtime tied at 29.

It the extra session, St. Marys scored the first seven points thanks to a basket by Beldin, another one from Brown, a free throw from Brown, and two Allison free throws to go ahead 36-29.

Beldin, who at one point had scored 13 of Cameron County’s 19 points – the Red Raiders trailed 18-12 at halftime, finished with a game-high 16 points with Allison adding 10, the second-highest of his career.

Srock had a career-high 31 points to go with 14 rebounds and five blocked shots.

NEW BETHLEHEM, Pa. – Owen Magagnotti had a double-double with 10 points and 10 rebounds to help Redbank Valley to an 80-49 win over visiting North Clarion.

Hunter Geer added 10 points for the Raiders with Griffin Ruhlman chipping in nine.

CLARION, Pa. – Michael Orzechowski and Lennon Lindholm each scored 17 points to help visiting DuBois to a 67-48 win over Clarion.

Jordin Sommers added 12 points in the win for the Beavers.

Freshman Jay Clover had his first career double-double for the Falcons as well with 14 points and 10 rebounds, while Broc Weigle and Ryan Cooper each scored nine points and Eli Penny had seven rebounds to go with eight points.

Gabe Watts added 12 points for the Rams who also scored 10 from Eric Christoff.

Alex Ognen and Richie McDowell each scored 10 points for Smethport with Layne Shall adding nine.

SHEFFIELD, Pa. – Tyler Hepinger scored a game-high 24 points and went 4-for-4 from the free-throw line in the final minute as Sheffield outlasted Brockway, 51-46.

Hepinger, named the Allegheny Grille of Foxburg Player of the Game, talked about the win

The win was the second this season for the Wolverines over the Rovers.

Connor Finch scored 10 points, including four of the first six in the second half for Sheffield, which extended a five-point lead to 11.

Brockway battled back to within four at the end of the third and got as close as three, 49-46 on a Marcus Copelli 3-pointer with 11 seconds left, but Tony Richards sealed the game moments later from the free-throw line.

Richards also had 10 points for the Wolverines.

Copelli led Brockway with 21 points, while Noah Adams and Lewis Painter netted 11 each.

HYDE, Pa. – Clearfield jumped all over visiting Bald Eagle Area early on its way to a 61-27 win.

The Bison led 18-1 at the end of the first quarter and never looked back.

Karson Rumsky scored 10 of his game-high 18 points in the first quarter and added five steals, five rebounds, and two assists.