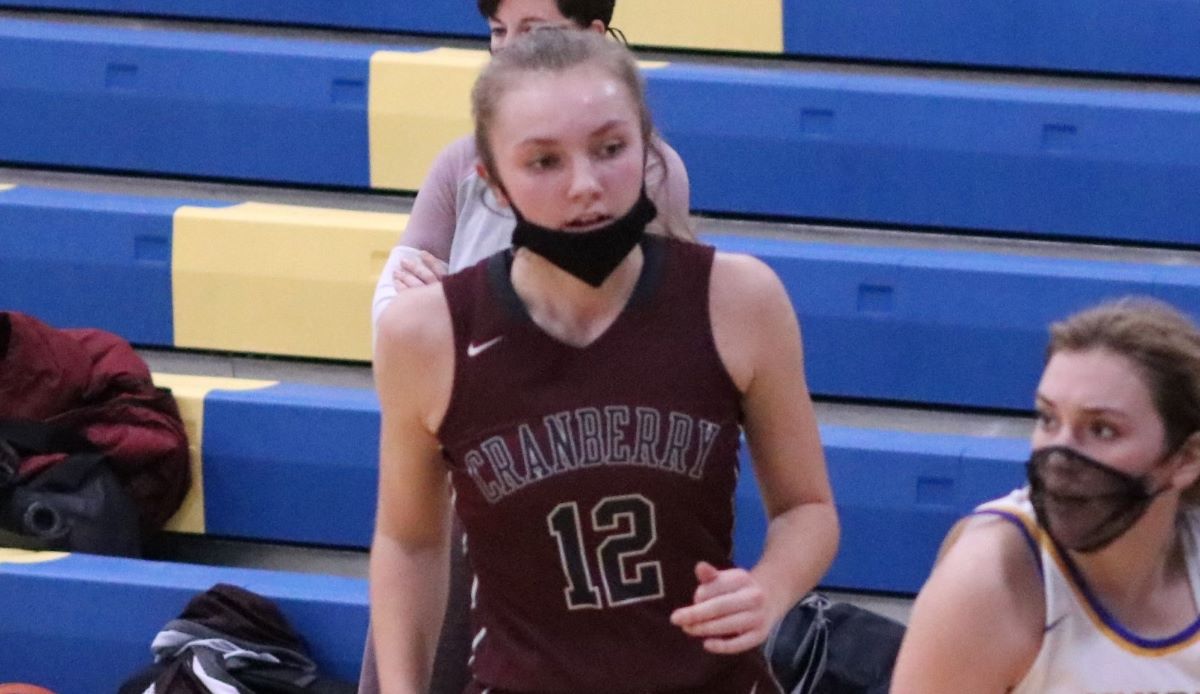 BROOKVILLE, Pa. – Trailing by eight with just over five minutes to play, visiting Cranberry went on an 11-0 run and stunned Brookville, 49-45.

The Berries trailed 41-33 following a 3-pointer by Kerstyn Davie with about 5:08 to play but needed just three minutes to turn the deficit into a 44-41 lead.

Jordan Montgomery started the comeback with a breakaway layup right after Davie layup and Ava Ferringer followed with a steal and a layup 17 seconds later to make it 41-37.

Ferringer then stole the inbounds pass, was fouled, and hit both free throws to put the Berries ahead, 42-41, with 2:53 to go.

Eden Wonderling got Brookville back within a point when she hit two free throws, but Kendell Findlay scored on a layup with 1:36 to go to make it 46-43 Cranberry.

Liz Wonderling got the Lady Raiders back within one for a final time, 46-45, when she hit two free throws.

Brookville then fouled Ayanna Ferringer and got what it wanted when she missed both free throws. But the Berries got the offensive rebound, and Findlay went on to hit one of two free throws on two different occasions – once with 32.6 to play and once with 22.6 left – to make it a three-point lead, 48-45. Ava Ferringer then sealed the win when she hit one of two charity shots with three seconds left.

Ava Ferringer led Cranberry with a game-high 19 points with Dean adding 10 before fouling out on a really questionable offensive foul call with just over three minutes left. Montgomery chipped in nine points.

Peterson broke the tie with a jumper in the lane early in the quarter, and Cobaugh turned a Kasmierski steal into a layup to make it 26-22.

After Kaci Stelene hit a free throw for Johnsonburg to make it 26-23, Kasmierski hit a pair of charity shots with 1:28 left to make it 28-23. Cobaugh then stole the ball, and Peterson hit one of two free throws to make it 29-23.

Stelene kept the Ramettes alive with an offensive putback to make it 29-25, but Delhunty connected on a charity shot with 16.5 to play put the game away.

Reilly Raught added a 12-point, 11-rebound double-double for the Lady Terrors who also got nine points and seven rebounds from Bri Heller.

Jessy Frank and Faith Jacob each added 12 points for the Lady Cardinals.

Teagan Runyon, seeing her first varsity action of the season, added nine points, all in the fourth quarter, for the Lady Beavers while Saige Weible and Taylor Smith each added eight.

Alyvia Huffman added nine points in the win for the Lady Bulldogs.

HYDE, Pa. – Sarah Weaver and Chloe Presloid combined to score 31 points, haul in 22 rebounds, come away with nine steals, and hand out three assists in Punxsutawney’s 54-24 road win over Clearfield.

Both players turned in double-doubles with Weaver scoring a game-high 17 points to go with 10 rebounds, seven steals, and two assists, and Presloid adding 14 points, 12 rebounds, two steals, and an assist.

KNOX, Pa. – A 20-point contest from Emily Lauer proved to be the difference in a 56-36 win by Keystone over visiting Clarion-Limestone.

Danae Hurrelbrink added 13 points for the Lady Panthers who also got 10 from Jozee Weaver and seven from Maddie Dunlap.

KANE, Pa. – A last-second change in location didn’t slow St. Marys down in a 37-17 road win over Kane at the Kane Middle School.

The game was slated to be played at Kane High School but was moved to the middle school after a leak in the roof at the high school. The change in venue delayed the game by approximately 45 minutes.

When things got started, eight different Lady Dutch scored led by 10 points from Samantha Hayes and six from Isabelle Caskey.

Kane got five points each from Madi Koza and Rainee Wright.