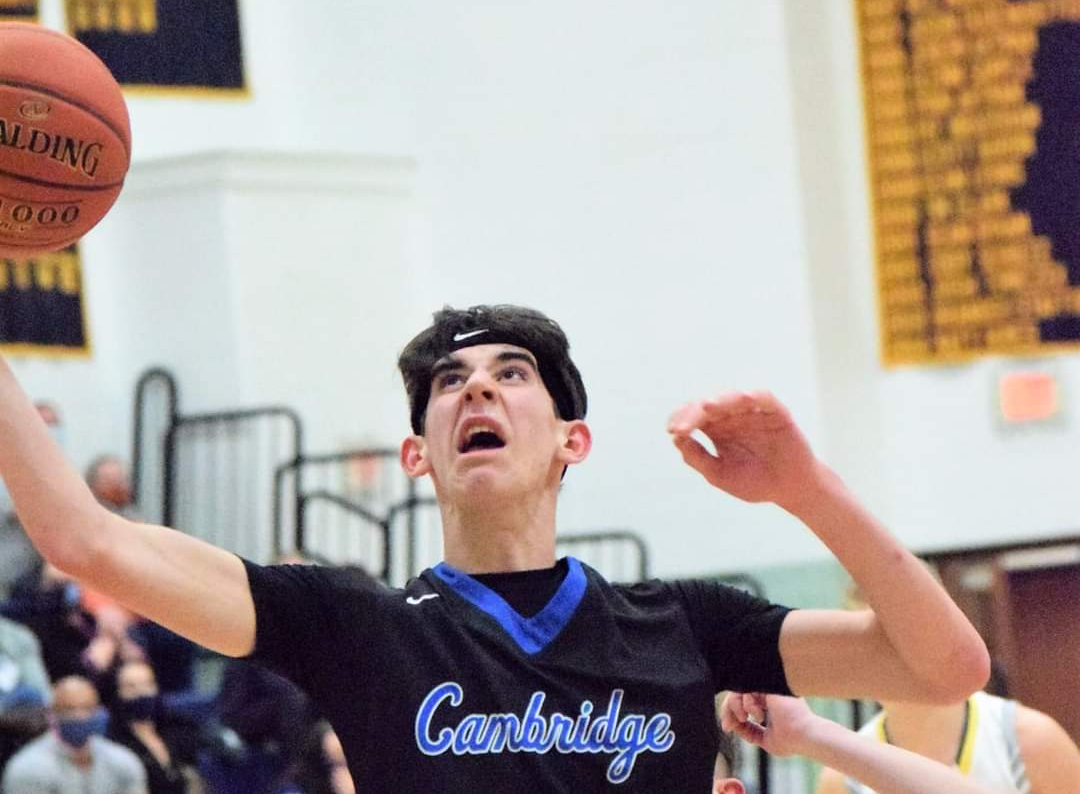 Cambridge Springs' Nathan Held had 30 points in a win over Eisenhower on Tuesday. Photo by Jeff Parkin.

Held, who knocked down six triples, scored 22 of his 30 points in the second half.

He was one of three Cambridge Springs’ players in double figures, as Trent Wheeler netted 13 points and Jayden Shinsky 11.

Owen Trumbull had 15 points to lead Eisenhower and Wyatt Lookenhouse 14.

SLIPPERY ROCK, Pa. – Easton Fulmer scored 17 of his 23 points in the first half as Franklin powered past Slippery Rock, 73-30.

Fulmer knocked down five 3’s, while Luke Guth scored 19 points, Zak Smith 12 and Cade Adams for the Knights, who outscored the Rockets 41-19 in the first half.

John Sabo had eight points and Ethan Pelsakov seven for the Rockets.

Ben Berdine scored nine of his 15 points in the first quarter for the Dragons, who built an early 10-point lead. Payton Barnes, returning from injury, netted 11 points in the win.

JT Blum pulled down eight rebounds for the Dragons, while Barnes had six assists and Berdine and Tommy Nyquist five assists.

Tucker Clark had 10 points and Logan Joncas eight for Corry.

GREENVILLE, Pa. – Greenville outscored General McLane 29-14 in the second half on its way to a 60-47 victory.

Ben Cano had another big game for the Trojans with 23 points, while Evan Cianci had 12 and Jalen Ritzert nine.

Cano scored 15 of his points in the second half.

Jeremy Frazai and Zach Franos added nine each for the Tigers.

Christian Hartley led 12 points for the Steelers, who led 31-13 at halftime.

LAWRENCE PARK, Pa. – Ben Burkhardt scored 21 points as Iroquois jumped out to a 14-point lead in the first quarter en route to a 61-44 win over Union City.

Jackson Doyle had a big game for Sharpsville with 20 points and Ryan Ladjevich 11.

Jake Mattocks was also in double figures scoring for the Mustangs with 11 points.

Tyler Durstine scored a game-high 20 points for the Rockets.

Liam Galla had 14 points for Prep.

Kamryn Weissinger inbounded to Senz with just over six seconds left, and Senz, who finished with seven points, did the rest.

Maddie Yanc scored six points in the third quarter, as the Blue Devils outscored the Bears 22-8 to pull away.

EDINBORO, Pa. – Warren outscored General McLane 27-4 in the first half on its way to a 49-32 win, its second in as many days over the Lancers.

Emma Ruhlman scored 11 of her 18 points in the first half for Warren, while Riley Childress knocked down three 3’s in the second quarter to help the Dragons pull away.

EDINBORO, Pa. – Emily Hess scored 19 points as McLane won the first of its two games on the day, 53-8 over Titusville.

Caroline Zentis had 11 points and Sara Gennuso 10 for the Tigers.

Carlie Longo and Alex Gallagher had five points each for Meadville.

Mayidson Kent added 11 points and Taylor Klick eight for the Bobcats, who led 27-12 at halftime.

Delaney Chase had 10 points and five rebounds to pace Eisenhower, while Lilly Smyth had six points and eight boards.