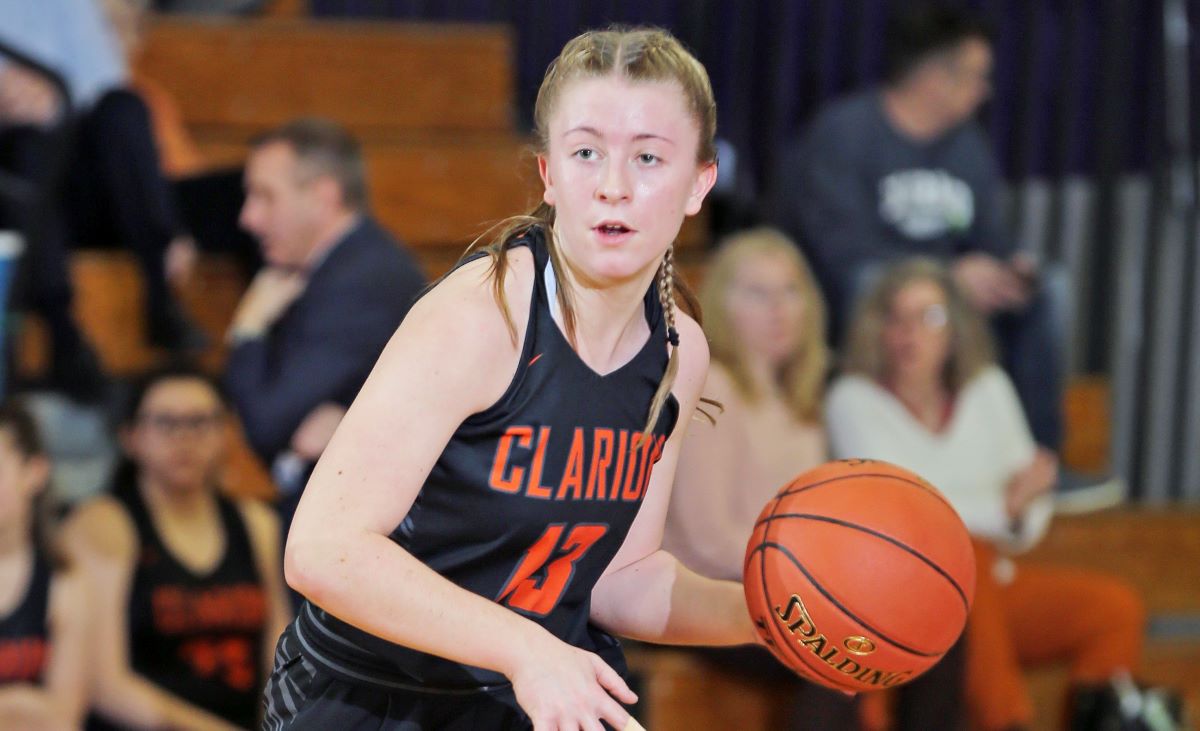 COUDERSPORT, Pa. – There will be a new champion in District 9 Class 1A girls’ basketball, after visiting and 10th-seeded Clarion knocked off two-time defending champion Coudersport, 31-27, in the opening round of the 2022 Class 1A bracket.

The Lady Cats (10-10) bolted out to an 11-4 lead at the end of the first quarter thanks to five Noel Anthony points and four from Taylor Alston.

The lead was still seven, 26-19, by the end of the third quarter before seventh-seeded Coudersport (15-8) outscored Clarion 8-4 in the fourth quarter to make things closer

Emma Chambers hit a pair of 3-pointers and scored a game-high 10 points to go with eight rebounds and three steals for Coudersport.

With the win, the Lady Cats guarantee themselves two more games at least – as even if they lose in the quarterfinals they will get to play in a consolation bracket for the fifth and final PIAA playoff berth awarded to District 9 in Class 1A.

NOTES – Coudersport had won four titles (two in 2A and two in 1A) in the last five years … With the Lady Falcons season coming to a close this marks the first time since 2015 Coudersport won’t advance to the PIAA Tournament.

ULYSSES, Pa. – Tied going to the fourth quarter, Northern Potter turned to two of its role players to lift the eighth-seeded Lady Panthers to its first postseason victory since 2017, 42-35, over visiting and ninth-seeded Smethport in the District 9 Class 1A opening round.

Abbie Cady and Riley Thompson each scored six points in the fourth quarter to help Northern Potter (17-6) break a 26-all tie going to the final eight minutes.

Both players had only scored more than six points in a game three times this year.

Smethport (14-8), whose season came to a close, got a game-high 16 points, 10 rebounds, and three assists from Elizabeth Hungiville.

Coryn McClain added nine points and seven rebounds for the Lady Hubbers who also got nine points from Abby Lutz.

With the win, the Lady Panthers guarantee themselves two more games at least – as even if they lose in the quarterfinals they will get to play in a consolation bracket for the fifth and final PIAA playoff berth awarded to District 9 in Class 1A.

RIMERSBURG, Pa. – Sixth-seeded Union used a 16-0 run that started midway through the second quarter and lasted deep into the third quarter to overcome a slow start and knock off visiting and 11th-seeded Port Allegany, 49-31, in the District 9 Class 1A opening round.

The Golden Damsels trailed 21-15 following an Ella Moses basket with just under five minutes to play in the second quarter. That hoop ended a 6-0 spurt for the Lady Gators.

But Keira Croyle got Union’s game-deciding run started with a basket at the 4:10 mark, and Union got within one, 21-20, by halftime thanks to a Dominica Logue steal and assist on a basket by Hailey Theuret with just under two seconds to play.

The Golden Damsels then started the second half on an 11-0 run that featured seven points from Kennedy Vogle and four from Logue to take a 31-21 lead on a Logue bucket with 2:25 to play in the third quarter.

Logue started the scoring in the quarter for Union and then Vogle had the next seven points before Logue finished the spurt.

Port Allegany was able to stabilize things and stayed within seven, 33-26, at the end of the third quarter.

But Logue hit a 3-pointer nearly a ½ minute into the fourth quarter and followed it up with a free throw a minute later to push the lead to double digits, and then Union went on a 10-0 run that lifted the lead to 21, 49-28, in the final minute of the game.

With the win, the Golden Damsels guarantee themselves two more games at least – as even if they lose in the quarterfinals they will get to play in a consolation bracket for the fifth and final PIAA playoff berth awarded to District 9 in Class 1A.