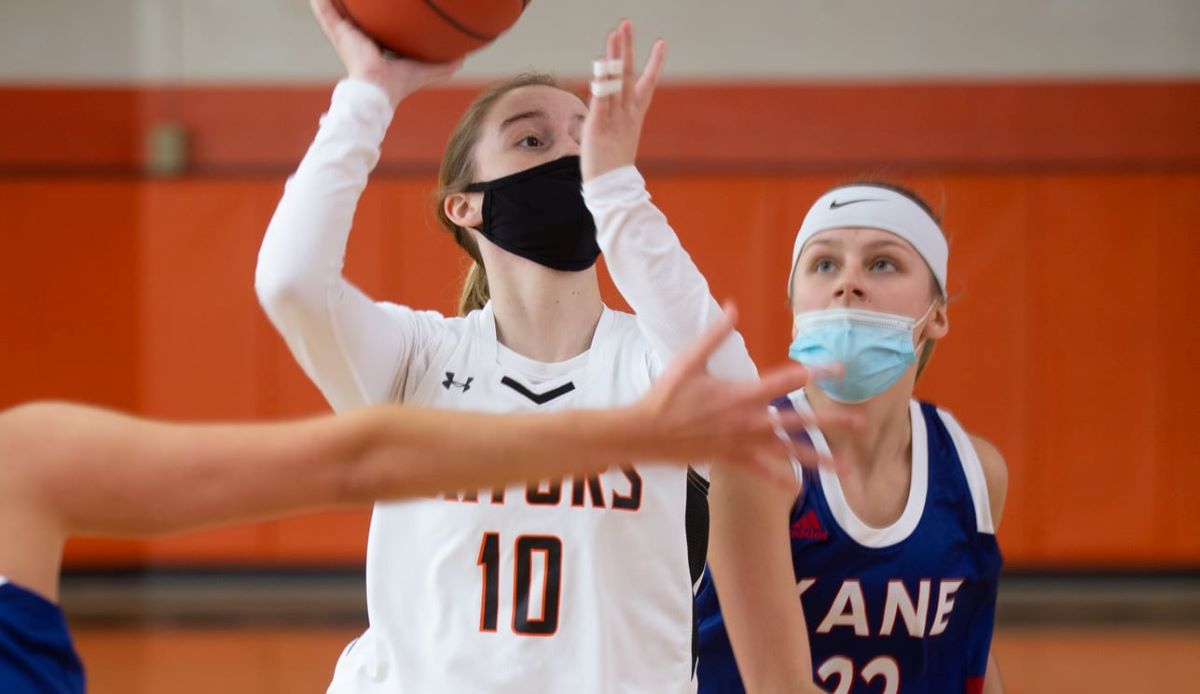 Bree Garzel of Port Allegany exploded for a career-high 40 points Saturday in a win over Bradford. Photo by Patrick Crants. See more of Crants work here.

PORT ALLEGANY, Pa. – Bre Garzel exploded for a career-high 40 points to go with 14 rebounds, four steals, and three assists to lead Port Allegany to a 60-36 win over visiting Bradford.

Garzel knocked down 12 shots from the field including six 3-pointers and hit 10 of 16 free throws. She scored 29 first-half points before adding two in the third quarter and nine in the fourth quarter.

Gracie Archer chipped in six points in the win for the Lady Gators who also got two points, 10 rebounds, and six blocked shots from Jade Evens and four points, nine rebounds, and four assists from Evin Stauffer.

SHEFFIELD, Pa. – Jessica Wagner had 18 points and 11 rebounds to help Forest Area to a 49-17 win at Sheffield, the Fires’ first win of the season breaking a 27-game losing streak dating back to last year.

Also for the Fires, Megan Clow chipped in seven points.

RIDGWAY, Pa. – Hailey Hilfiger and Kaelee Bresslin combined for 24 points and 14 rebounds to lead visiting Cameron County to a 42-25 win over Ridgway.

PUNXSUTAWNEY, Pa. – Scoring 48 first-half points, Punxsutawney left no doubt as to who the best girls’ team in District 9 is rolling past visiting one-loss Keystone, 78-34.

The unbeaten Lady Chucks (13-0) outscored Keystone 48-19 in the first half including 22-4 in the second quarter on their way to victory.

Sarah Weaver led Punxsutawney with 22 points and nine rebounds with Riley Presloid knocking down five of the Lady Chucks’ 10 3-pointers on her way to 21 points.

Chloe Presloid got into the act for the victors with 14 points, seven assists, three rebounds, and three steals.

The She-Wolves led 26-3 at halftime after Venango Catholic lost star freshman Lily Homan to an injury in the first quarter.

Hayes led the Lady Dutch with a game-best 14 points with Caskey adding 11.

Feb. 20, 2021 D9 Boys’ Hoops: On Wild Saturday Clearfield Erases 6-Point Deficit in Final Minute; Austin Rallies from 10 Down; CVille Wins on Late FTs
Five D9 Wrestlers Claim Titles at D4/9 Class 3A Championships
This website or its third-party tools process personal data.In case of sale of your personal information, you may opt out by using the link Do not sell my personal information.
×
Manage consent