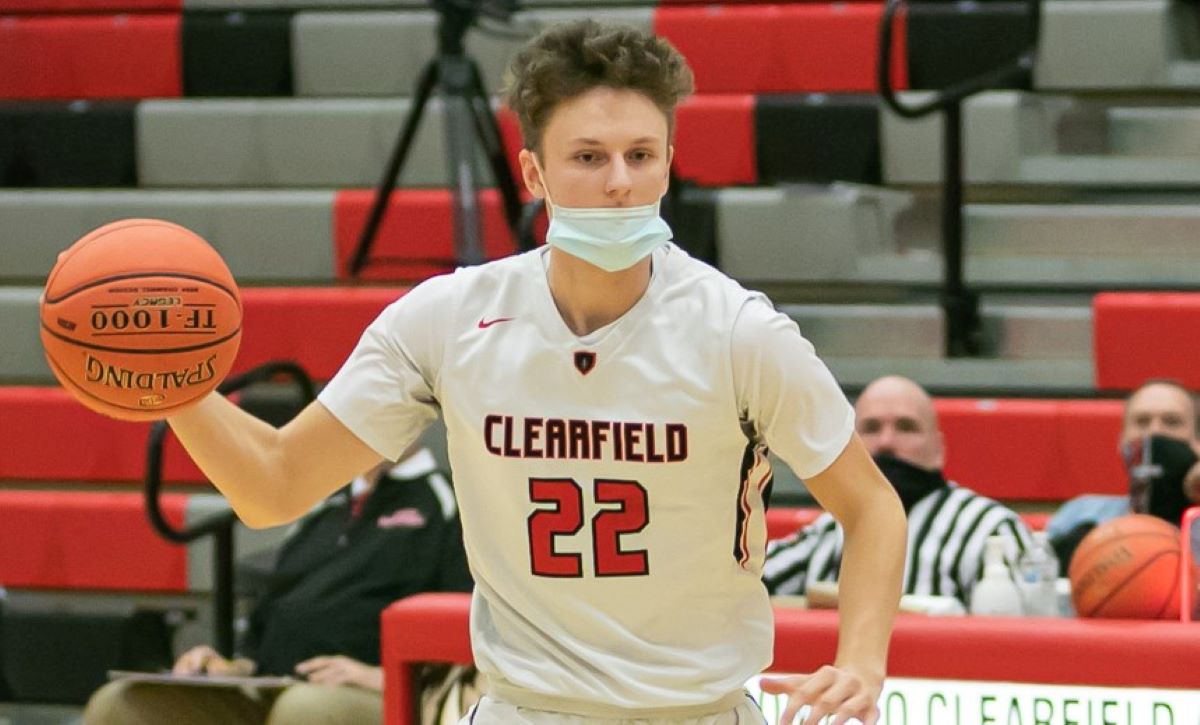 Karson Rumsky hit the game-winning shot for Clearfield with just 12 seconds left as the Bison rallied from six down with a minute left. Photo by Jared Bakaysa of JB Graphics. See more of Bakaysa's work here

Clearfield trailed by six 43-37, after Nick Way hit the first of a one-and-one with 1:03 to play for Bellefonte before missing the second shot.

Luke Winters then gave the Bison life when he scored on a layup with 48.4 seconds left cutting the Red Raiders lead to four, 43-39.

On the ensuing inbounds play, Clearfield’s Nick Ryn and Ryan Gearhart trapped Bellefonte’s Ty Kroell in the right corner causing a turnover with 44.5 seconds to play.

Gearhart then drained a 3-pointer from the left corner with 33.2 seconds left to make it 43-42 with Clearfield getting a timeout with 32.1 seconds to play.

The ensuing inbounds pass turned into a disaster for Bellefonte, as Way’s pass towards Gannon Brungard near midcourt was challenged by Cole Miller and went off Bungard out of bounds to Clearfield.

The Bison then missed a couple of shots before the ball went out of bounds off Bellefonte with 16.7 seconds left setting up Rumsky’s winning shot.

After Rumsky connected to give Clearfield the lead, Bellefonte had two shots to win the game.

But Rumsky started the comeback for the Bison when he hit a pair of free throws 13 seconds later, and then Curvey Puckett made it 42-37 when he rebounded a missed shot by Gearhart and laid it back in with 2:08 left.

The Panthers were down 38-28 when Glover got hot hitting three deep 3-pointers in a span of just under three minutes to put Austin ahead, 39-38.

Then, after Skylar Crawford scored a layup off a pass from Adam Lucas to make it 38-36, Glover went to the left elbow, used a screen from Lucas, and nailed the go-ahead 3-pointer wth 2:29 to play.

Watch the shot via Austin’s YouTube Stream of the game

Aydan Nicka then made it 41-38 when he took a pass from Glover with 25.5 seconds to play before Jacob Hooftalle rebounded a missed Nicka free throw and made one of two charity shots with 13.8 left.

Port Allegany got its only basket of the fourth quarter – a Dylan Poorman 3-pointer – at the horn to set the final score.

Thanks to the nine fourth-quarter points, Glover led Austin with 13 points and added five assists. Nicka chipped in 12 tallies and six rebounds for the Panthers with Hooftallen scoring 11 to go with four assists and four rebounds.

Carter Moses led Port Allegany with 10 points, all in the first half, while Drew Evens added nine.

The Tide were down two, 38-36, going to the fourth quarter but tied the game at 51 thanks to a pair of 3-pointers from Terry and another triple from Dan McGarry.

Terry, who scored 10 of his 14 points in the fourth quarter was then was fouled trying to win the game and calmly hit both free throws.

McGary had a big game for Curwensville as well with a game-high 19 points, and Trevor Lansberry added 10. Also for the Golden Tide, Scott Condon chipped in seven tallies.

Anthony Maseto led the Owls with 17 points, Jack Bracken added 14, and Curtis Boring scoring nine, all in the fourth quarter.

The Chucks, thanks in large part to strong first and third quarters, led 41-28 after the third.

Punxsutawney outscored DCC 18-10 in the first quarter and 13-5 in the third after the Cardinals had cut the deficit to five, 28-23, at halftime.

Dante Armaninin had a game-high 19 points for DCC with Alec Srock adding 13 and Jalen Kosko eight.

COUDERSPORT – Hayden Keck tickled the twines for a team-high 26 points, all in the first three quarters, as Coudersport ran past visiting Elk County Catholic, 68-57.

Behind an 11-point second quarter from Keck, the Falcons led 35-26 at halftime and built the lead to 52-38 at the end of 24 minutes with Keck scoring 10 more points in the third quarter.

Derek Easton added 17 points, six assists, and five steals for the Falcons who also got 12 points from Christian Furman and 11 points and seven rebounds from Dalton Keglovits.

Mark Kraus hit five 3-pointers on his way to a game-high 28 points for ECC with Mason McAllister adding 10 points and Charlie Breindel and Luke Jansen nine each.

FRILLS CORNERS, Pa. – North Clarion continued to surge winning for the sixth times in its last eight tries thanks to a 58-43 win over visiting Venango Catholic.

Isaiah Aeschbacher chipped in 12 points for the Oilers with Holden Stahl scoring 11.

UNION CITY, Pa. – Matt Bennett scored 20 of his 24 points in the second half, including 12 in the fourth quarter, to help Union City beat visiting Sheffield, 54-48.

Tyler Hepinger and Conner Finch each scored 17 points for Sheffield, which found itself tied at 38 going to the fourth quarter before Bennett took over the game for the Bears.

Featured Game: Schmader’s Steal and Three at Horn Helps Brockway Stun Clarion
Feb. 20, 2021 D9 Girls’ Hoops: Garzel Explodes for 40 in Port A Win; Brockway’s Esposito Wins 200th Game; Forest Area Breaks Losing Streak
We use cookies on our website to give you the most relevant experience by remembering your preferences and repeat visits. By clicking “Accept All”, you consent to the use of ALL the cookies. However, you may visit "Cookie Settings" to provide a controlled consent.
Cookie SettingsAccept All
Manage consent