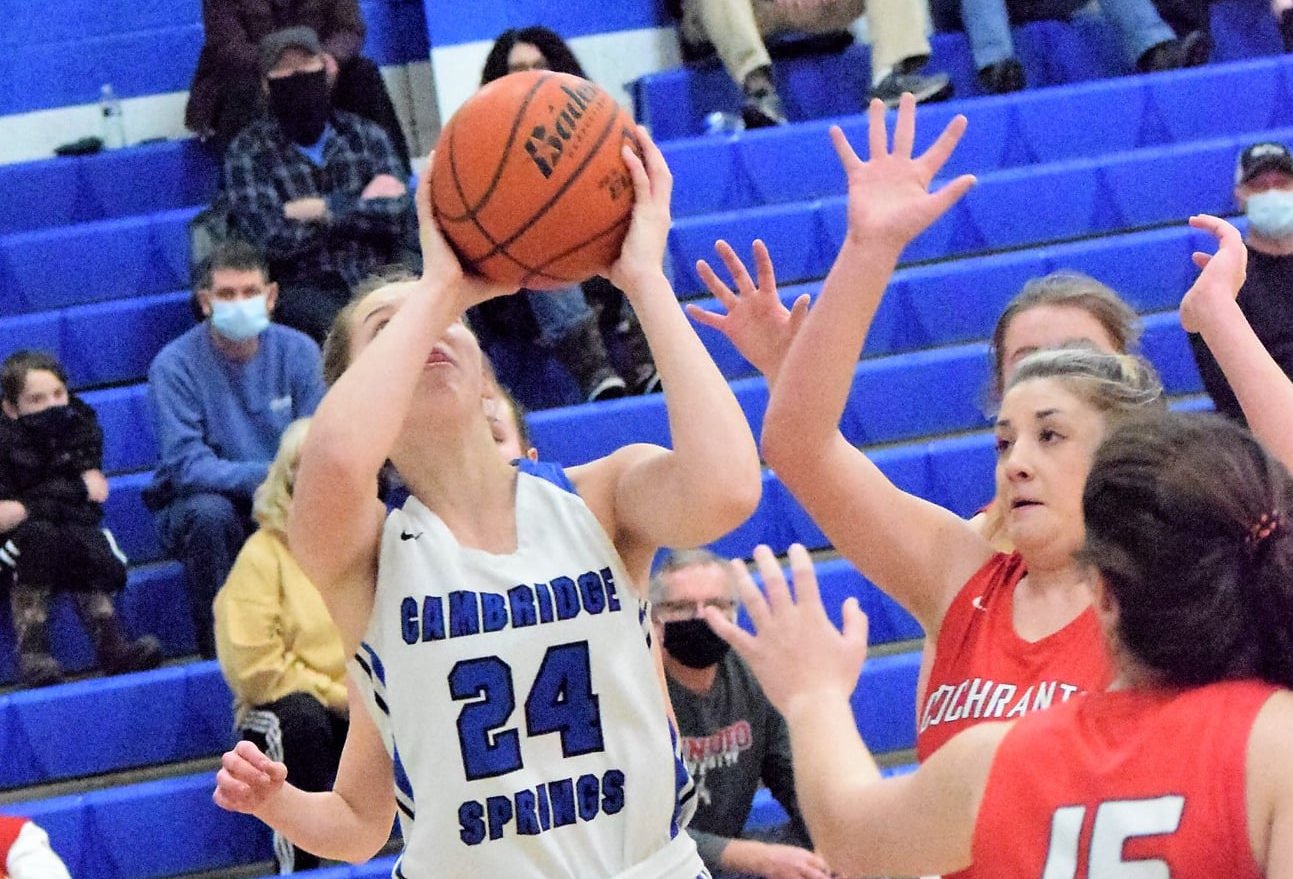 YOUNGSVILLE, Pa. – Youngsville’s Kenzie Olewine connected on a 3-pointer on the Eagles’ first possession of the game. She hit three more throughout the contest on her way to a game-high 18 points as the Eagles topped visiting Eisenhower, 42-37, Saturday afternoon.

Olewine hit two of her four 3-pointers in the first quarter, but Eisenhower’s Delaney Chase matched Olewine with a pair of 3s of her own.

Olewine talked about the victory following the game:

Olewine was the only Youngsville player in double figures, but Kamryn Weissinger added eight points in the win.

Maplewood outscored UC 20-9 in the second quarter to build a 13-point halftime advantage.

Izzy Eimer had 18 points for the Tigers, while Bailey Varndell chipped in with 14 and Megan Mangus 10.

Eliza Reynolds had another big game for the Lady Bears, netting 22 points.

SHARPSVILLE, Pa. – Sharpsville outscored Hickory 16-7 in the third quarter and held off the Hornets for a 47-45 victory.

Chasie Fry and Alli Davis scored 13 points apiece in the win for the Blue Devils.

Jaelyn Blood added 11 for the Eagles.

Samantha Zank added 16 points and Lily Pulvino 10 for the Huskies.

Josie Lewis had a big game in defeat for Greenville with 28 points, while Jaidah Rosario added 16.

Emily Hess added 11 points and Bailey Cannon eight for GM, which outscored Erie in every quarter.

HADLEY, Pa. – Sanaa Brodie poured in 19 points to lead Farrell to a 66-40 win over Commodore Perry.

The Steelers outscored the Panthers 38-19 in the first half en route to the win.

Mackenzie Hause had a big game in defeat for CP with 21 points.

STONEBORO, Pa. – Olivia Kulyk poured in 25 points to lead Mercyhurst Prep to a 44-34 win over Lakeview.

The Lakers outscored the Sailors by 10 in the fourth quarter.

GREENVILLE, Pa. – Trailing by one going into the fourth quarter, Greenville was able to edge Sharon, 57-53.

Ben Cano connected for 20 points in the Trojan victory, while Evan Cianci added 12 and Jalen Ritzert 11.

Otis Driver scored a game-high 22 points for the Tigers and Brayden Coxson added 13.

SHARPSVILLE, Pa. – Franklin’s Easton Fulmer knocked down four 3’s on his way to 17 points as the Knights earned a 53-33 win over Sharpsville.

Franklin outscored Sharpsville 27-6 in the second half, including 11-0 in the third quarter.

WATERFORD, Pa. – Fort LeBoeuf erupted for 28 points in the first quarter, building a 15-point lead on its way to a 62-42 victory over Cambridge Springs.

Isaiah Aeschbacher chipped in 12 points for the Oilers with Holden Stahl scoring 11.

UNION CITY, Pa. – Matt Bennett scored 20 of his 24 points in the second half, including 12 in the fourth quarter, to help Union City beat visiting Sheffield, 54-48.

Tyler Hepinger and Conner Finch each scored 17 points for Sheffield, which found itself tied at 38 going to the fourth quarter before Bennett took over the game for the Bears.

Omar Stewart netted 13 points for the Steelers, who led 32-17 at halftime, while Lamont Samuels added 11.

Dylan Stull added 10 points for GC, which had ten different players make their way into the scoring column.

Richie Preston had a big game in defeat for the Big Reds with 23 points.

Tyler Shultz netted 12 points for Fairview, which had 12 different players score in the win.

Aaron Collins had 18 points for EFC.

Riley Walker, Nick Loposky and Haydin McLaughlin all had 10 points for Reynolds.