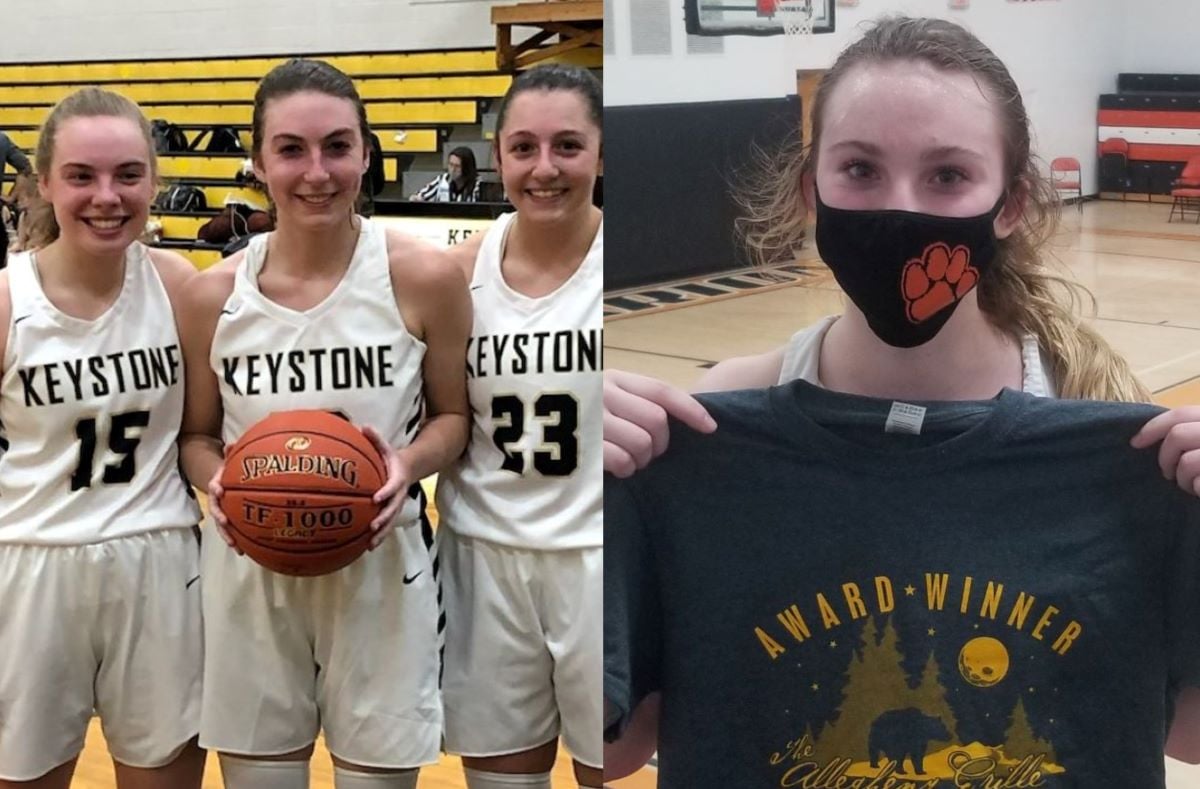 Trailing by one, Clarion inbounded the basketball following a missed free throw by Catherine Kelly with 5.4 seconds to play needing to go the length of the court.

Jordan Best threw a half-court pass to Erica Selfridge, who somehow caught it between Kelly and Aslyn Pry. Selfridge then passed to Simko, who laid it up and in on the left side of the hoop for the game-winning basket.

The game-winning basket capped a comeback from as many as 11 down in the first half for the Lady Cats, who also trailed by six, 42-36, with 1:45 to play. It also marked just the second lead of the game for Clarion and it’s first since 2-0.

Simko and Selfridge talked about the final play

The game-winning shot also marked the third straight quarter Clarion beat the horn with a basket.

Best hit a shot just before halftime and Simko found the bottom of the net as time ran out in the third quarter.

Best’s basket just before the break helped Clarion, which trailed 25-14 late in the first half, get within seven, 25-18, at halftime. Simko’s shot at the end of the third quarter pulled the Lady Cats within five, 32-27.

Clarion then got within one, 37-36, with under four minutes to play in the game before Aslyn Pry (three points) and Camryn Fallen (two) pushed the Moniteau lead back to six, 42-36.

Best then got Clarion within one, 42-41, with a basket with around 13 seconds to play, and Kelly was called for a walk after tough defense by Selfridge with 10.7 left.

A wild shot by Best, however, went out of bounds giving Moniteau the ball back with 6.5 seconds left.

Kelly was then fouled with 5.4 to play, and her free throw was ruled to have missed everything – although it appeared as though it might have hit the front of the rim – giving Clarion the ball out of bounds.

Best led Clarion with 13 points with Simko adding eight, including six in the fourth quarter, and Ava Cherico and Noel Anthony seven apiece. Selfridge chipped in with six.

Pry had a double-double for Moniteau with a game-high 16 points to go with 11 rebounds. Kelly added nine points. Abbey Jewart also had six on a pair of 3-pointers for Moniteau.

It was the second close game between the teams this year with Moniteau rallying from 13 down to win 51-45 in overtime at Moniteau Dec. 11.

Watch the game (Lauer’s 1,000th point comes near the end of the game on the last two points scored by Keystone) via Keystone’s YouTube Broadcast.

Lauer is the first Keystone player to score 1,000 points since Taylor Geer, who graduated in 2018 with 1,401 career tallies.

Editor’s Note: D9and10sports.com is slated to do a video interview with Lauer Wednesday afternoon

DUKE CENTER, Pa. – Trailing by seven at halftime, Otto-Eldred rallied in the second half for a 38-34 win over visiting St. Marys.

The Lady Terrors were down 22-15 at halftime but outscored the Lady Dutch 23-12 in the second half, including 11-5 in the fourth quarter.

Anna Merry led the second-half charge with seven points, all seven she scored in the game to go with three rebounds and three steals.

Lily Homan scored a career-high 28 points and was strong both early and late for the Lady Vikings.

She scored 12 of Venango Catholic’s 20 first-quarter points and 20 in the first half to help the Lady Vikings to a 35-25 halftime lead.

She then scored eight points in the fourth quarter including three in the final 26 seconds after Union had closed to within two, 54-52, with a half-minute to play.

MARIENVILLE, Pa. – Andrea Meals tickled the twine for a game-high 18 points to pace a 50-33 road win for A-C Valley over Forest Area at East Forest.

Rachel Cullen also had a strong game for the Lady Falcons with 15 points with Baylee Blauser adding 10.

In addition, Redbank Valley got nine points from Emma Huffman.

Ava Ferringer had 21 points and 10 rebounds for Cranberry.

Guiher scored a game-high 17 points for the Lady Beavers, who were playing for the first time since Jan. 21, while Johnson added 15 points.

Alexas Pfeufer and Saige Weible each chipped in eight tallies in the victory.

Feb. 2, 2021 D9 Boys: Allison, Cameron Co. Beat the Horn and Ridgway; O-E Rallies Past Bradford; Orton Paces A-C Valley Win
You Pick the District 9 and District 10 Basketball Performances of the Week Powered by Gc Town Properties Jan. 25-30, 2021
This website or its third-party tools process personal data.In case of sale of your personal information, you may opt out by using the link Do not sell my personal information.
×
Manage consent