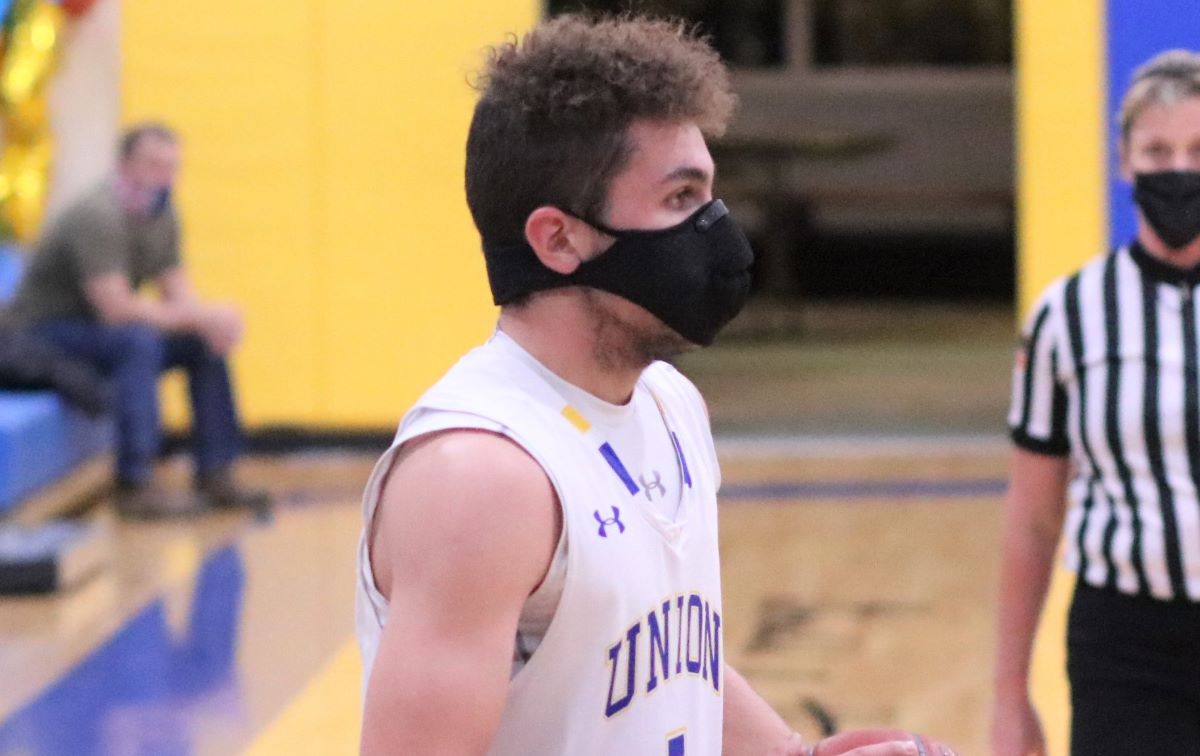 With the contest tied at 58, Union saw Vogle miss a shot, Skyler Roxbury got the rebound and miss the follow-up with the rebound going off North Clarion’s Dylan Walters out of bounds.

Roxbury then found Vogle coming off a screen in the left corner for the go-ahead shot.

Watch the play via the Union YouTube Live Stream https://youtu.be/d5Kd8g7o0vE?t=5518

Following the basket, Hayden Smith came up with a steal, and Caden Rainey hit one of two free throws with 9.8 seconds left to make it a two-possession game.

Walters then hit a meaningless three at the horn to set the final score.

It was two free throws by Vogle with a minute left that tied the game at 58 after Collin Schmader had put North Clarion up 58-56 with a basket with 1:12 to play.

After Vogle’s game-tying charity shots, Rainey came up with the defensive play of the game when he stole the ball from Walters with the play ending up in a back-court violation on North Clarion when Aidan Hartle grabbed the ball across halfcourt while his body was mainly still in the frontcourt.

Vogle had a game-high and season-high 24 points for Union. It was his third-highest point total in his career behind a 30-point game against A-C Valley Jan. 6, 2020, and a 28-point contest against Venango Catholic Dec. 28, 2019.

The Lions, who nearly upset Clearfield Tuesday night, trailed 46-44 going to the fourth quarter but rode the play of Call and Jordan Hesdon, who scored eight of his 14 points in the final eight minutes, to the win.

Riley Klingensmith, who added seven points, then hit two free throws with 2:08 left to move the lead to four, 58-54, before Hesdon, who hit 6 of 8 charity shots in the contest including 4 of 6 in the final frame, extended the advantage to 60-54 with a pair of makes with 48.3 to play.

After Tanner Merwin swished a 3-pointer with 32.9 seconds left to give A-C Valley life, Callen calmly sank four straight free throws – the first two with 22.1 to play and the next two with 14.0 left – to make it a 64-57 lead.

Levi Orton hit a 3-pointer with 8.8 seconds left to close out the scoring for A-C Valley.

Callen, who was back after missing the fourth quarter Tuesday with an injury, added six rebounds and three blocks, while Hesdon had seven rebounds, five assists and four steals. Ryan Hummell chipped in six points, five assists, and two blocked shots, and Tommy Smith had eight points and six rebounds. Braden Rankin also scoring seven points for the Lions.

Orton exploded for a season-high 35 points for A-C Valley, including going 16 of 18 from the free-throw line. Orton also had eight rebounds and four steals.

Nick Felix added 14 points for the Beavers who also got 10 Jordin Sommers.

Jake Liederbach added 13 points and 16 rebounds for the Vikings who also got eight points and seven rebounds from Logan Rakow.

GALETON, Pa. – Dan Park and Dom Allegretto combined to score 34 points to lead Ridgway to a 59-29 road win over Galeton.

Park led all scorers with 18 points with Allegretto chipping in with 16 points. RJ Miller also scored 10 points for the Elkers.

Keystone trailed by six, 12-6, at the end of the first quarter but took a 21-14 lead at halftime thanks in part to three 3-pointers, including two from Pierce.

SHINGLEHOUSE, Pa. – Layne Shall scored 18 points and Alex Ognen added 16 to help visiting Smethport to a 67-44 win over Oswayo Valley.

CLARION, Pa. – After missing a game with an injury, Cal German returned with a flourish netting a game-high 25 points on Senior Night to lead Clarion past visiting Cranberry, 79-24.

Craddock had a monster double-double with 15 points and 16 rebounds with Verdill adding 10 points, eight rebounds, seven steals, and six assists.

Christian Simko chipped in 13 points and six steals for the Bobcats.

HYDE, Pa. – Led by 16 points from Cole Miller, Clearfield had four players score in double digits in a 67-35 win over visiting West Branch.

DUBOIS, Pa. – Dante Armanini had a double-double with 16 points and 11 rebounds as DuBois Central Catholic raced past visiting Sheffield, 62-24.