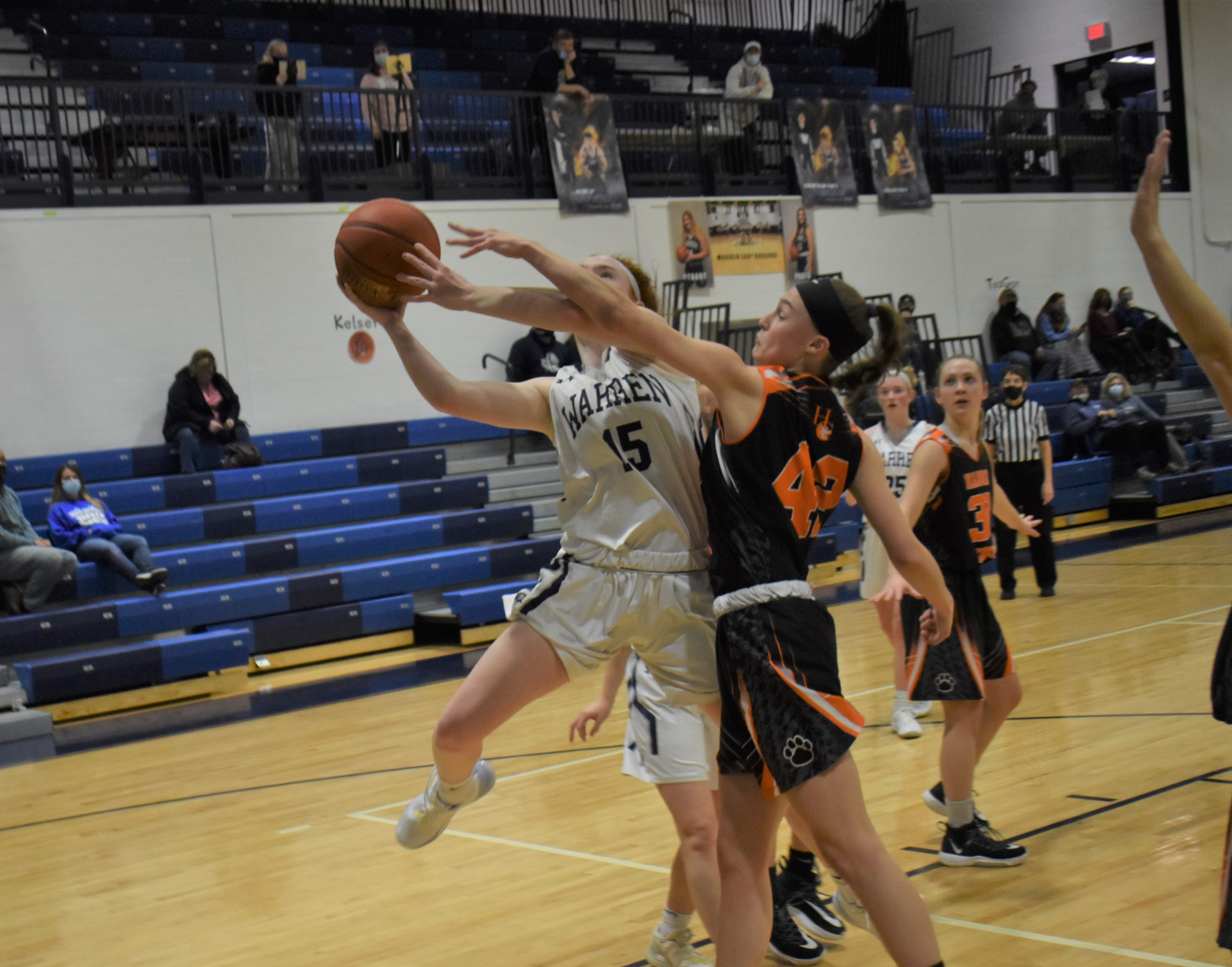 Warren's Emma Ruhlman scored 21 points in a win over Oil City on Wednesday.

Ruhlman, who scored 13 of her points in the first half, was one of three Dragons in double figures.

Riley Childress connected on three 3’s on her way to netting 14 points, while Kelsey Stuart had 10.

Childress and Ruhlman had four assists each, while Ruhlman grabbed seven rebounds, as did Gracie Ruhlman.

Sammy Momeyer netted 10 points and Caroline Zentis and Sara Gennuso nine each for the Tigers, who led 29-8 at halftime.

Jayden Drew and Izzy Danforth had five points each for Conneaut.

LINESVILLE, Pa. – Grove City got 18 points from Clara Hannon as they bested Conneaut, 47-34.

Becca Santom netted 18 points for the Eagles, who led 21-14 at halftime.

Bella Davis, Emma Stevenson and Jocelyn Denihan had six points each for the Eagles.

Alli Davis finished with 12 points and Tori Kimpan eight for the Blue Devils.

The Lady Gremlins used an 11-3 first quarter to take control of the game early with Johns scoring six of her eight points in the quarter.

Mackenzie Hause had eight points for the Panthers.

Jaysina Sellers and Jayla Walls had eight points each for Sharon.

COCHRANTON, Pa. – Logan Joncas knocked down five 3’s on his way to a 20-point effort as Corry knocked off Cochranton, 51-45 in non-region action.

The Beavers led by 11 at halftime and were able to hold off the Cardinals in the second half.

The Eagles led by as many as 20, but Greenville battled back into it, thanks to the strong play of Jonah Lentz and Ben Cano, who finished with 16 points each.

Nick Felix added 14 points for the Beavers, who also got 10 from Jordin Sommers.

Iroquois’ Ben Burkhardt had a game, scoring 30 of the Braves’ 51 points.

Feb. 17, 2021 District 9 and District 10 Basketball Scores
Feb. 17, 2021 D9 Boys’ Hoops: Vogle Hits Late 3-Pointer to Lift Union Past NC; C-L Upsets A-C Valley; DuBois Tops Oil City
We use cookies on our website to give you the most relevant experience by remembering your preferences and repeat visits. By clicking “Accept All”, you consent to the use of ALL the cookies. However, you may visit "Cookie Settings" to provide a controlled consent.
Cookie SettingsAccept All
Manage consent