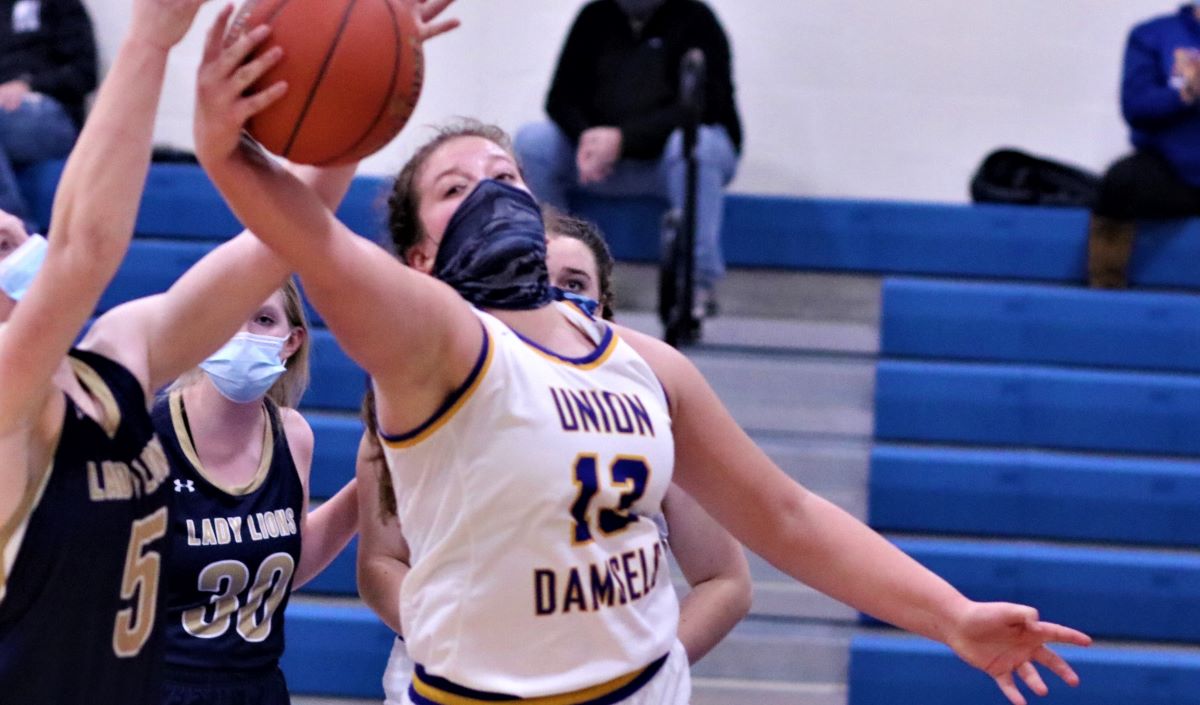 FRILLS CORNER, Pa. – Dominika Logue came away with a steal and a breakaway layup with 42.3 seconds left to give Union a 41-40 win at North Clarion.

Up by one, the She-Wolves were inbounding the ball in front of the Union bench when Amya Green’s inbounds pass went through the hands of Addison Shaftic right to Logue who was moving towards the basket. Logue was able to go in and give the Golden Damsels the lead.

North Clarion had a golden chance to tie the game or take the lead when Gwen Siegel was fouled with 18.7 seconds left and went to the line to shoot two.

But Siegel missed both free throws. The rebound came to Union’s Hailey Theuret. But Green and Siegel both hustled on the play and tied Theuret up with the possession arrow in favor of North Clarion with around 12 seconds to play.

Shaftic, however, saw her shot from the right side just outside the paint come up a little short with Kennedy Vogle getting the rebound.

North Clarion had only committed one foul in the half up to the point and time ran out before th She-Wolves could put Union on the free-throw line.

Maddie McFarland had given North Clarion a 40-39 lead when she scored with 1:32 to play.

The McFarland layup was one of the few things that went right offensively for the She-Wolves in the second half, as they were held to 13 second-half points which allowed Union to overcome a 25-18 halftime deficit.

The Golden Damsels tied the game at 34 after three quarters thanks to four third-quarter 3-pointers, two from Vogle and one each from Logue and Theuret.

Logue, who finished with a game-high 16 points, then hit a big 3-pointer in the fourth quarter as well.

Keira Croyle and Hailey Kriebel each added eight points in the win for Union.

Presloid led the Lady Chucks with 19 points on 8 of 12 shooting, including 3 of 6 from 3-point range, while adding three steals, two assists, and a rebound.

Weaver chipped in 18 points to go with four rebounds and four assists.

FOXBURG, Pa. – Three days after losing a two-point contest at home to A-C Valley, visiting Clarion-Limestone exacted some revenge with a 40-32 win over the Lady Falcons.

Payton Simko added 10 points in the win for the Lady Cats.

CURWENSVILLE, Pa. – Riley Ryen hit five 3-pointers on her way to a career-high 15 points to help visiting Clearfield make the short trip to Curwensville a victorious one, 53-24.

Emma Hipps added 10 points for the Lady Bison, who also got nine on three 3-pointers from Megan Durandetta and eight from Paige Rhine. Clearfield hit 10 3-pointers on the night with Hipps also drilling a pair.

Feb. 16, 2021 D10 Hoops: Walker, Cochranton Boys Top Saegertown; Yanc, Cambridge Springs Girls Edge Franklin
Feb. 16, 2021 D9 Boys’ Hoops: Weaver Three Late in OT Lifts Punxsy to Win; Rainey Helps Union Beat DCC
We use cookies on our website to give you the most relevant experience by remembering your preferences and repeat visits. By clicking “Accept All”, you consent to the use of ALL the cookies. However, you may visit "Cookie Settings" to provide a controlled consent.
Cookie SettingsAccept All
Manage consent