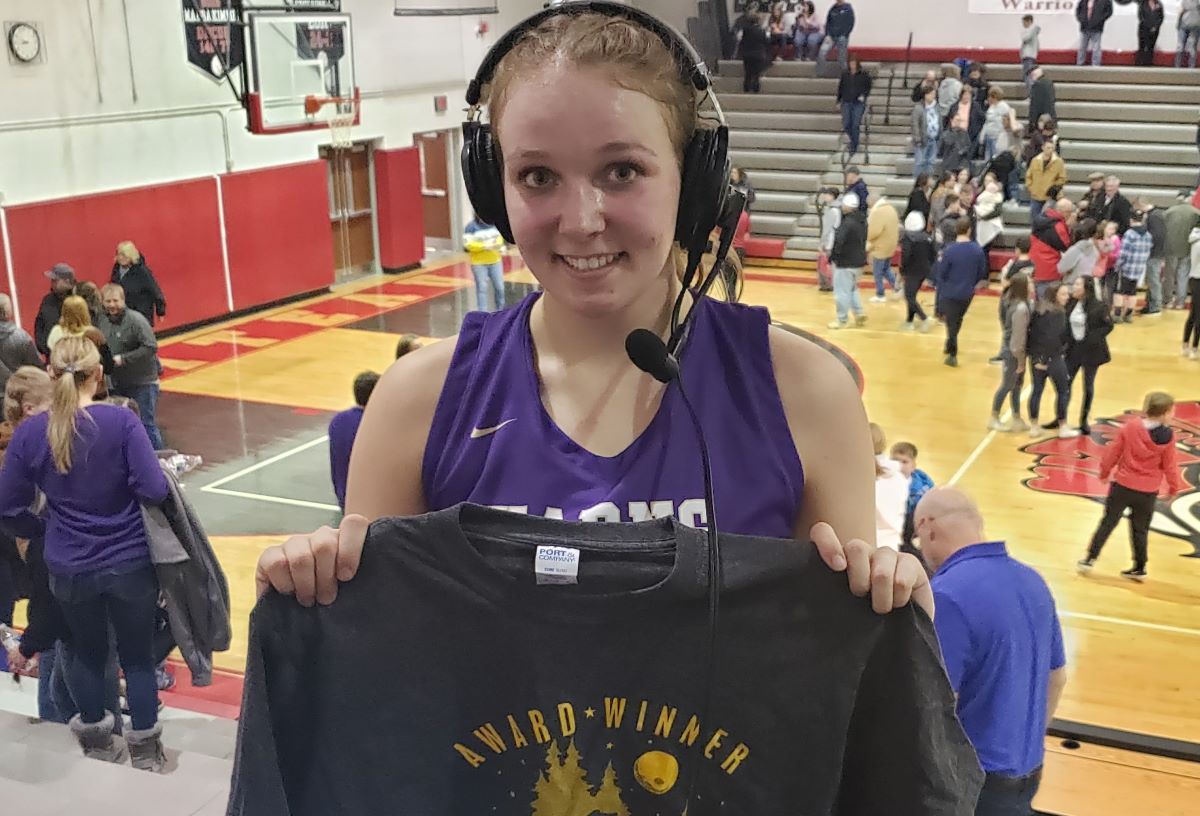 WEST SUNBURY, Pa. – Building an 18-point lead 2 ½ minutes into the fourth quarter, Karns City held off a furious Moniteau rally to secure the second and final KSAC playoff spot awarded to the KSAC Large School Division with a 47-37 road win over the Lady Warriors.

But McMillen missed a chance to push the lead back to 19 when she missed the ensuing free throw, and Moniteau (11-10, 6-4) got hot from the outside while also turning up the defensive intensity to go on a 13-1 run that cut the deficit to six, 43-37, following a free throw by Davina Pry with 45 seconds to play.

The Lady Warriors then got a steal on the inbounds play, but Abbey Jewart’s runner in the lane was short, and the rebound went out of bounds to Karns City.

The Lady Gremlins, who had been just 6 of 14 from the free-throw line up to that point, hit four straight – two from McMillen and two from Brooke Manuel – to put the game away.

Manuel had a strong game for Karns City with a game-high 15 points, including 10 in the first half to help the Lady Gremlins build a 27-11 halftime lead.

She was named the Allegheny Grille of Foxburg Player of the Game and talked about the win.

McMillen was also strong on the night with 13 points, including 11 in the second half, for the Lady Gremlins, while Abby Callihan chipped in with seven.

All eight of Fleeger’s tallies came in the fourth quarter, including hitting a pair of 3-pointers, as she provided the spark off the bench for the Lady Warriors.

Kendall Sankey had a team-best nine rebounds for Moniteau.

While both teams will participate in the District 9 Class 3A playoffs, only Karns City advances to the KSAC playoffs. The Lady Gremlins will take on KSAC Small School champion North Clarion at 6 p.m. Thursday, Feb. 17, at Tippin Gym in Clarion in the semifinals. Redbank Valley will face Union in the other semifinal contest at 8 p.m. with the winners playing for the KSAC title at 6 p.m. Saturday, Feb. 19, also at Tippin Gym.

Karns City earned the playoff spot thanks to a three-way tiebreaker with Moniteau and Clarion-Limestone, who were both 6-4 in league play as well. The Lady Gremlins were 4-1 vs. the KSAC Small School Division while Moniteau and C-L were both 3-2.

RIMERSBURG, Pa. – The more things change the more they stay the same.

The North Clarion senior had a career night scoring 20 points, including 15 in the second half, to lift North Clarion to a 48-41 win at Union to clinch the She-Wolves’ seventh consecutive KSAC divisional crown.

Kriebel was at her best during a game-changing 10-0 North Clarion run in the third quarter scoring the final eight minutes of the spurt, which turned a 28-23 deficit into a 33-28 lead that North Clarion never relinquished.

Union, which led by as many as 12 (21-9) midway through the second quarter held a 28-23 lead following a 3-pointer by Dominika Logue with just under six minutes to play in the third quarter.

But a Gwen Siegel basket got the North Clarion run started, and Kriebel delivered the next eight points finishing the run with a basket at the 1:33 mark of the third quarter.

Union was able to stabilize things going to the fourth quarter by scoring the final four points of the third thanks to a pair of Hailey Kriebel free throws and a basket just before the horn from Keira Croyle off a feed from Logue to make it a one-point game, 33-32, going to the final eight minutes.

The Croyle hoop was the first basket for the Golden Damsels in over 5 ½ minutes.

A Croyle offensive putback early in the fourth quarter kept the game at a single point, 35-34, before a Claire Kriebel free throw followed by an Emma McFarland basket gave North Clarion a 38-34 lead with around 5:45 to play.

It was still a four-point North Clarion lead, 42-38, after Claire Kriebel hit two free throws with just over two minutes to play before Croyle made one of two with 1:39 left to make it 42-39.

Siegel then scored to make it 44-39, but her basket was answered by another offensive rebound and putback by Croyle to close the gap to three again, 44-41, with just over a minute remaining.

It was Siegel again on the other end with around 50 seconds left to make it 46-41, and after a couple of missed Union shots, Claire Kriebel put the game away with two charity shots with 20 seconds to go.

Croyle led Union with 19 points with Logue, who hit four 3-pointers, adding 14 but only five in the second half.

Both teams advance to the KSAC Playoffs.

North Clarion is the top seed from the KSAC Small School and will play Karns City at 6 p.m. Thursday, Feb. 17, at Clarion University’s Tippin Gym. Union will take on KSAC Large School champion Redbank Valley at 8 p.m. The championship game is slated for 6 p.m. Saturday, Feb. 19, also at Tippin Gym.

DUBOIS, Pa. – Madison Rusnica scored 12 of her game-high 18 points in the fourth quarter to help DuBois pull away from visiting Brookville, 45-32.

The Lady Beavers led by just three, 28-25, going to the fourth quarter before turning it up and pulling away.

Alayna Haight had 17 to lead Brookville with Jordan Cook and Elizabeth Wonderling each scoring seven.

CLARION, Pa. – Noel Anthony hit four 3-pointers and scored all 16 of her points before halftime to pace a 57-29 Clarion win over visiting A-C Valley in KSAC Small School play.

Rebeka Ketner added 14 points for the Lady Cats who also got 10 from Payton Simko and seven from Jordan Best.

Mariah Wessell added six points and seven steals for the Lady Vikings with Alyson Stewart chipping in nine rebounds and a point.

TIOGA, Pa. – Courtney Martin scored 12 of her 18 points in the third quarter to help Northern Potter take home a 53-38 win at Williamson.

Kennedy’s Seniors Step up to Wrap up Region 1 Title With Win Over Rival Farrell
Feb. 16, 2022 District 9 and District 10 Basketball Schedules Powered by Hunter’s Station Golf Club
This website or its third-party tools process personal data.In case of sale of your personal information, you may opt out by using the link Do not sell my personal information.
×
Manage consent