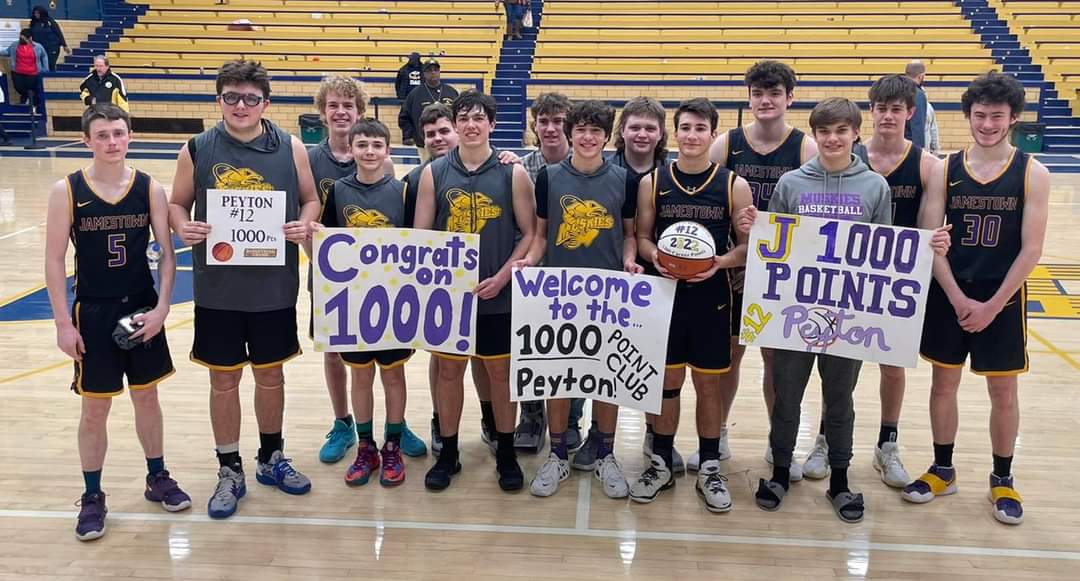 FARRELL, Pa. – Jamestown’s Peyton McElhinney scored the prestigious 1,000-point club, but it was host Farrell that came away with a 64-55 Region 1 win.

McElhinney scored eight points in the first half to hit 1,000 on the nose, part of a 19-point effort.

Jamestown led 48-43 after three quarters, but Farrell, led by 19 points from Lamont Samuels, went on a 21-7 run to close the game.

Nasir O’Kane was also in double figures for Farrell with 15 points, while Kabron Smith added nine.

The Ramblers had a strong first half, outsourcing the Royals 33-16.

WATTSBURG, Pa. – Seneca outscored North East 16-8 in the fourth quarter on its way to clinching the Region 3 title with a 51-48 win over North East.

Ryan Mayes poured in a game-high 23 points for North East.

Warren led 37-27 at halftime and opened the third quarter on a 10-0 run to put the game out of reach.

Bennett scored 16 points in the first half as the Bears built an eight-point advantage. Wyatt Post tallied 16 points and Bryce Drayer nine for Union City.

Logan Kennedy had 13 points and Luke Sleeman 12 for Maplewood.

The Knights scored 34 points in the first quarter en route to the win, as Damon Curry tallied 19 points, Luke Guth 16 and Cole Buckley 12.

A total of 11 different Franklin players scored in the game.

SLIPPERY ROCK, Pa. – John Sabo scored 22 points, 19 of which came in the second half as Slippery Rock topped Greenville, 63-51.

The Rockets outscored the Trojans 36-25 in the second half, including 18-10 in the fourth quarter.

Shane Thompson scored 16 points for Slippery Rock, 11 of which came in the first quarter.

The Cardinals outscored the Knights 26-9 in the second and third quarters.

Landon Homa tallied 12 points and Jaiben Walker 11 for the Cardinals.

CAMBRIDGE SPRINGS, Pa. – Cambridge Springs outscored Iroquois 45-28 in the second half en route to a 72-49 victory.

Nathan Held had a big game for the Blue Devils, pouring in 26 points, including a 10-of-11 effort from the free-throw line. Josh Reisenauer added 12 points for Cambridge.

Corrion Combest had 17 points and Logan Briggs 15 for Iroquois.

The win not only gives the Eagles a regular-season split with the Hornets but also puts them in a first-place tie, with both teams at 9-3 in the region.

Hickory cut the margin to five, 36-31 after three quarters, but Grove City was able to close it out in the fourth.

Aidan Enoch had 12 points and Tyson Djakovich 11 for the Hornets.

EDINBORO, Pa. – Logan Anderson scored 20 points as General McLane earned a spot in the D10 Class 5A title game with a 58-53 win over Meadville.

The win set up a game between McLane and Prep, as the Lancers clinched a finish ahead of Meadville in the Region 6 standings.

Frazao tallied 22 points and Sitter 15 as the Tigers remained atop the Region 5 standings.

Logan Joncas had 14 points, including four threes to pace Corry.

Malik Lampkins-Rudolph and Elijah Harden had 17 and 16 points, respectively for the Golden Eagles.

Travis Kruszewski had 13 points for the Huskies.

Isaiah Colon had 11 points for Titusville.

The Yellow Jackets led by 12 at halftime.

The win gives the Trojans a season split with the Dragons.

Spano drained four triples in the win, while Alexis Marsh scored all 11 of her points in the second quarter as McDowell took a 28-15 halftime lead.

Skylar Reidel and Rachel Brady had three points each for Corry.