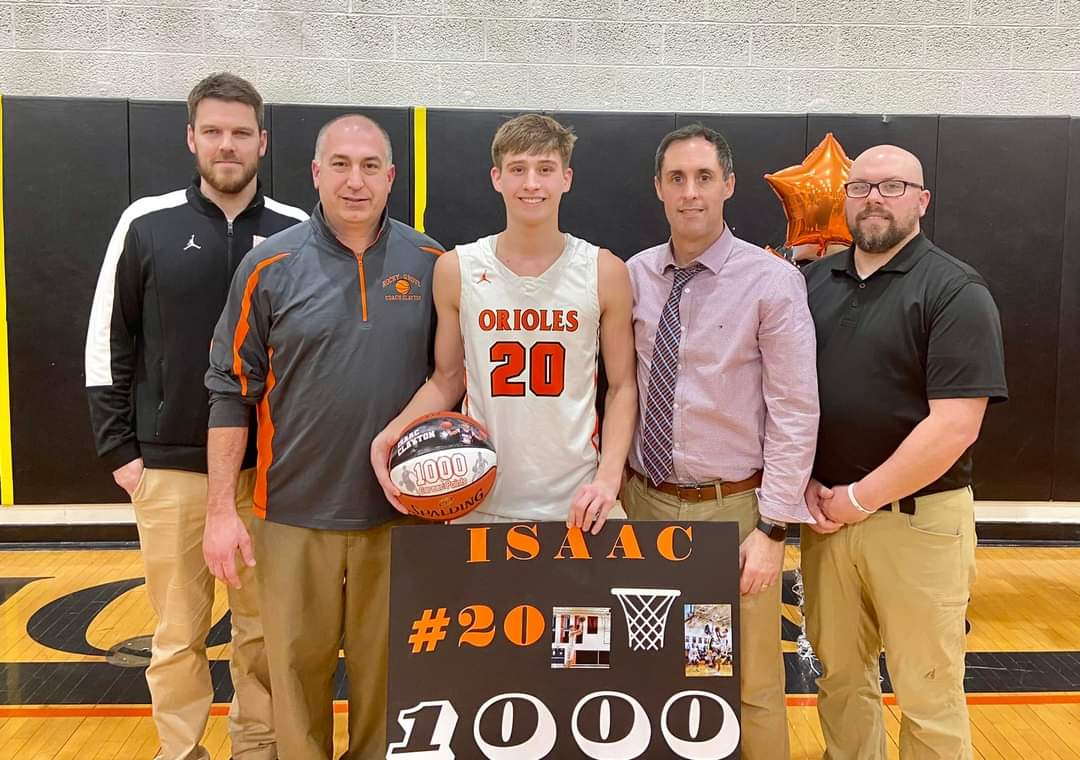 Rocky Grove’s Isaac Clayton needed 19 points going into Tuesday’s game against Commodore Perry and he got exactly 19 in the Orioles 68-28 win.

Clayton got to 1,000 on a coast-to-coast layup off a steal early in the third quarter.

See the play here via the Rocky Grove YouTube stream.

Rocky Grove, which also got 10 points from D’Andre Whitman, improved to 13-4 with the win.

The Knights led by as many as 11, but Cambridge Springs kept it close throughout, thanks to the strong play of Nathan Held, who led three Blue Devils in double figures with 18 points.

Eisenhower went 8-of-10 from the free-throw line in the fourth quarter to ice the game, including 6-of-8 from Kael Hunt and 2-of-2 from Kyler Black.

Bunk scored nine of his points in the first quarter and talked about the win afterward:

Bunk was one of four Eisenhower players in double figures, as Wyatt Lookenhouse finished with 15, Hunt 13, and Curt Darling 10, while Black added eight.

FRANKLIN, Pa. – Easton Fulmer exploded for 36 points, 20 of which came in the second half of Franklin’s 68-52 win over Hickory.

Fulmer went 13-of-13 at the free-throw line as the Knights turned a 35-32 halftime deficit into a 47-42 advantage by the end of the third quarter.

The win gives the Knights a season sweep of the deafening PIAA Class 4A runner-up Hornets.

Tyson Djakovich made seven threes and finished with 21 points to lead Hickory (18 of which came in the first half), while Joey Faazone added 10 for Hickory.

ERIE, Pa. – Tavion Spencer scored 15 points as Cathedral Prep picked up its second win of the season over rival McDowell, 60-46.

Brody Paris and Nick Grimm had 12 points each for McDowell.

Tommy Nyquist led four Warren players in double figures with 18 points, 16 of which came in the first half and included four triples.

Parks Ordiway tallied 14 for the Dragons, while JT Blum had 12 and Owen Becker 11.

FAIRVIEW, Pa. – Logan Frazao and James Sitter scored 19 points each as Fairview rolled to a 67-27 win over Conneaut (Pa.) to stay atop the Region 5 standings.

The Tigers, who also got eight points from Zach Scott, scored 49 points in the first half.

The Huskies built a 33-17 halftime lead en route to the win.

Travis Kruszewski had 12 points and Gavin Ennis 10 for the Huskies.

Blake Myers had 13 points to lead Youngsville while Keegan Mesel 11.

The Panthers took over sole possession of first place in Region 2 with the win, coupled with Eisenhower’s victory over Cambridge Springs.

Logan Kennedy had 17 points and Luke Sleeman 13 for Maplewood.

Landon Haggart poured in 23 points for the Eagles, including five threes.

Tuff McConahy and Damien Micco had 10 points each for Wilmington.

Anthony Collins had 15 points and Sam Collins 11 for the Eagles.

WATERFORD, Pa. – Ronan Dorler and Dom Gentile scored 20 points each as Fort LeBoeuf got a 74-68 Region 5 win over Titusville.

Dorler and Gentile were two of four Bison in double figures, as Hunter Villa had 14 points and Carson Papay 13. Gentile also had 12 rebounds.

Logan Kibbe and Bobby Yost had 11 points each for the Bobcats.

HADLEY, Pa. – Behind 29 points and seven steals from Lily Homan Venango Catholic rolled to a 54-4 win at Commodore Perry.

Mariah Wessell added 14 points and five steals for the Lady Vikings who also got four points and 11 rebounds from Sadie Kalamajka.