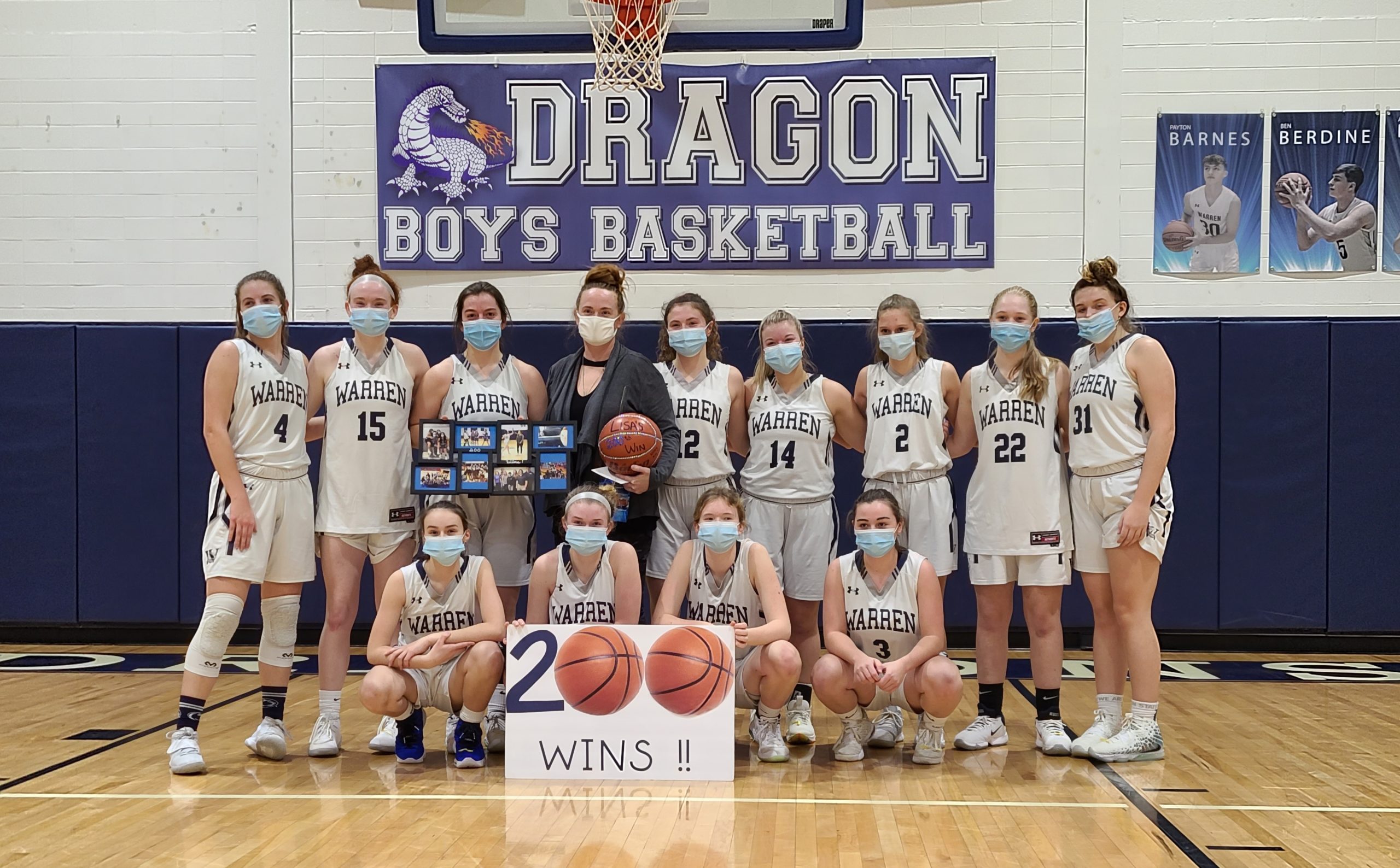 WARREN, Pa. – It was a milestone win with little drama for the Warren Lady Dragons and head coach Lisa LaVan.

“I mean obviously I’ve had great assistant coaches over the years,” LaVan said. “Jasper (Merenick) and Jess (Robinson) who aren’t here anymore. Jenny (Phillips, current assistant) and of course big John (White) has been around the whole time with me.”

“She always says that we’re a big family,” White said. “My daughter Katie was a part of the first win and all three of Lisa’s girls are a part of this one. That’s pretty neat.”

Warren’s Riley Childress goes up for two of her game-high 18 points.

Win No. 200 for LaVan saw both teams get off to a slow start, with Harbor Creek’s Samantha Zank notching the first bucket of the game three minutes in.

It didn’t take long for the Lady Dragons to catch fire, however.

Harbor Creek led 4-0 before Warren’s Riley Childress drilled back-to-back 3’s to give Warren a lead that continued to grow.

Childress finished with a game-high 18 points.

Leading 13-5 after the opening quarter, Warren’s Emma Ruhlman scored six points in the second quarter and Kelsey Stuart drilled a triple as the lead grew to 15, 24-9 at halftime.

It was a far cry from the typical game between the two programs, who have played some classics in recent seasons.

“Through the years we have had a lot of battles with them,” LaVan said. “We had a great game plan coming in and I was very happy with how they executed that game plan for sure.”

Zank scored six of her team-high eight points in the first half for Harbor Creek.

Harbor Creek’s Lily Pulvino (21) skies for a rebound while being pressured by Warren’s Teagan Paris (23).

It was a nice bounce-back for the Dragons, who were coming off losses to McDowell and Villa Maria last week.

“That was a very tough week last week,” LaVan said. “McDowell does what they do and Villa’s just at a different level than us. That’s okay. That only makes us better. It was great to get in the gym and play another 5A school and get a good win against them.”

Ruhlman finished with 15 points and 12 rebounds, Childress four assists to go along with her 18 points and Stuart three assists.

The players, both past and present, are what make the program go, according to LaVan.

Warren’s Emma Ruhlman goes up for 2.

“I can know all the X’s and O’s in the world, which I don’t, but if you don’t have good players and kids dedicated to you, you’re not going to do be successful,” she said. “I’ve been blessed to have the players I’ve had, all of them over the years.”