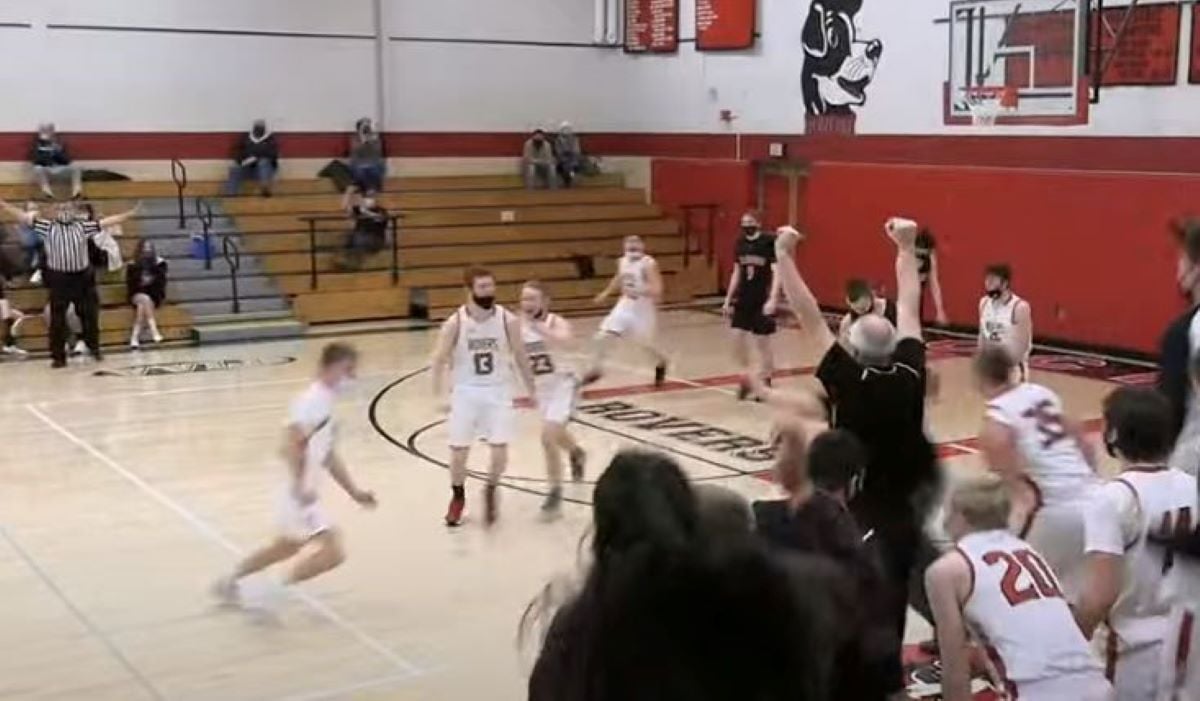 BROCKWAY, Pa. – Austin Schmader hit a running 3-pointer at the horn to give Brockway a 52-49 upset win over visiting Clarion Saturday morning.

Schmader intercepted an Ethan Burford long-heave pass near halfcourt and took the running three that went in just before the buzzer sounded giving the Rovers an improbable comeback win.

Watch the final play via Brockway’s Live YouTube Stream of the game.

Brockway trailed by seven, 43-36, following a pair of Beau Verdill free throws after he was fouled grabbing an offensive rebound for Clarion with 5:43 to play.

But the Rovers went on a 12-3 run that featured a pair of buckets from Lewis Painter and 3-pointers from Noah Adams and Marcus Copelli.

Copelli’s triple, meanwhile, came from the left corner off a pass from Marcus Bennett with just over two minutes left and tied the game at 46.

On the play, Painter decoyed like the Rovers were going to run clock before taking a pass around the foul line and cutting to the hoop for the go-ahead score.

Clarion got within one when Hunter Craddock hit the first of two free throws with 1:07 left making it 48-47.

Verdill secured the offensive rebound off the missed second charity shot, but Cal German missed a 3-pointer. Craddock got the rebound but saw his layup roll in and out with 57.9 seconds left with the rebound going out of bounds to Brockway with 55.5 to play.

Bennett was then fouled going hard to the rim with around 38 seconds to play and hit the second of the two-shot foul to make it 49-47.

German had a chance to give Clarion the lead with a 3-pointer with about 20 seconds left, but it missed the mark. Verdill, however, secured the rebound and was fouled on the floor sending him to the line to shoot a one-and-one with 17.9 seconds remaining.

Verdill calmly hit both charity shots to tie the game at 49.

Clarion then got the ball back when Aiden Bullers was called for a walk in the lane with 7.3 seconds to play.

But after inbounding the ball, Clarion’s Burford tried the long pass that resulted in the steal and winning hoop by Schmader.

The game was close throughout with Clarion leading 14-13 at the end of the first quarter and 23-22 at halftime before Brockway tied the game at 34 going to the fourth quarter.

Clarion started the final eight minutes on a 9-2 run thanks in large part to 3-pointers from Dawson Smail and Verdill.

Adams, who hit four 3-pointers, led Brockway with 14 points with Painter adding 13 and Copelli, who hit a pair of triples, 10. Schmader’s winning basket was his only made shot of the game.

Clarion, playing its second road game in less than 16 hours, got a game-high 19 points from Verdill, including 10 in the fourth quarter. Christian Simko added 11 for the Bobcats with Craddock chipping in eight.

The win advances Brockway, which was also playing its second game in less than 16 hours – although both were at home – to 2-9 while Clarion fell to 11-5.

Brockway is back in action Monday at Sheffield while Clarion returns to the hardwood Tuesday when it hosts DuBois.

Feb. 20, 2021 District 9 and District 10 Basketball Scores
Feb. 20, 2021 D9 Boys’ Hoops: On Wild Saturday Clearfield Erases 6-Point Deficit in Final Minute; Austin Rallies from 10 Down; CVille Wins on Late FTs
This website or its third-party tools process personal data.In case of sale of your personal information, you may opt out by using the link Do not sell my personal information.
×
Manage consent