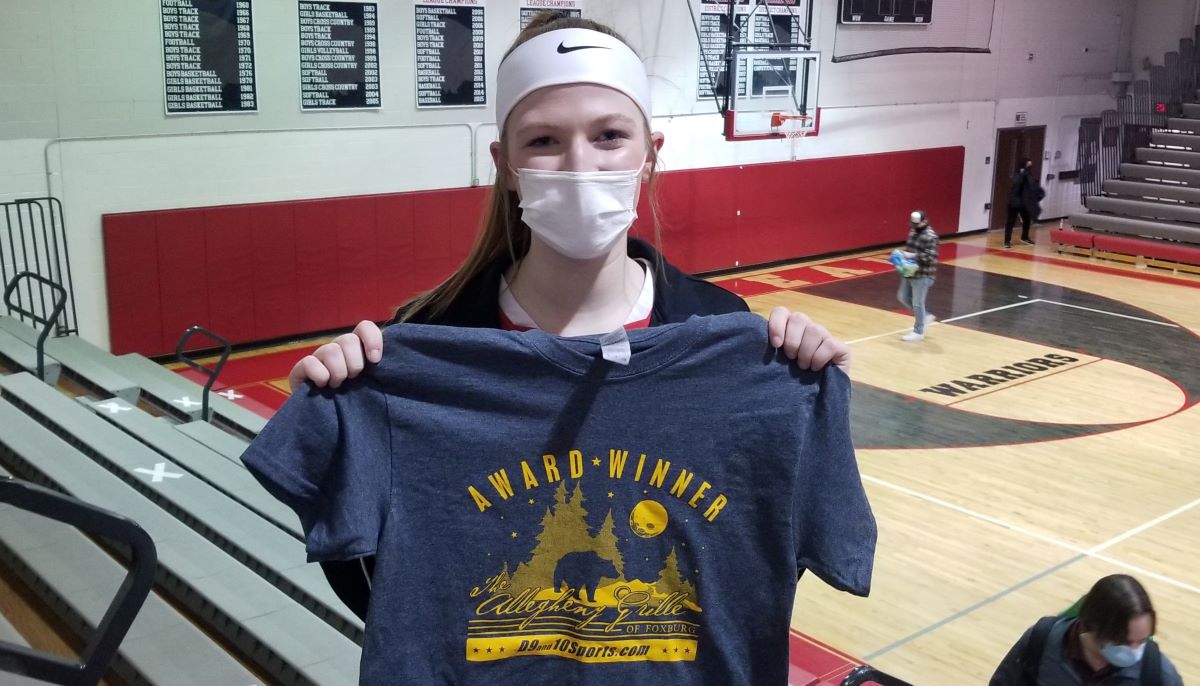 WEST SUNBURY, Pa. – Thanks to a barrage of third-quarter 3-pointers from Caylen Rearick, Redbank Valley rallied from a four-point halftime deficit to beat Moniteau, 59-56, in West Sunbury.

“Moniteau was tough tonight,” Redbank Valley head coach Chris Edmonds said. “They have a good team. Coming down to Moniteau is always a tough game.”

Rearick hit four triples in the third quarter and six in the game on her way to a team-high 20 points. It was one 3-pointer shy of the school record-tying seven she hit a week ago against Clarion.

Thanks to Rearick’s long balls, the Lady Bulldogs (8-3) took a 48-47 lead into the fourth quarter and built the advantage to as many as five, 56-51, following an Alivia Huffman free throw with a little over a minute to play.

But Moniteau (9-6) didn’t go away without a fight.

Following Alivia Huffman missing the second free throw, Aslyn Pry, who had a game-high 21 points to go with a game-best 18 rebounds, five assists, and three steals, went coast-to-coast to draw the Lady Warriors within three, 56-53.

Alivia Huffman, who had a double-double of her own with 14 points and 11 rebounds, then missed three consecutive free throws on two separate trips to the line to keep Moniteau within a possession.

Catherine Kelly, though, saw her open 3-pointer from the right corner go off the mark, and Alivia Huffman finally settled in and hit two free throws to push the lead back to five, 58-53 with under 20 seconds to play.

Abbey Jewart, though, knocked down a 3-pointer with around six seconds left to make it 58-56. But despite having timeouts to use, Moniteau elected not to use one after the Jewart triple, and the clock ticked down to 2.6 seconds left before Rearick was fouled.

Rearick missed the first throw, but following a Moniteau timeout, calmly hit the second one to make it 59-56.

Needing to go the length of the court to get off a potential game-tying 3-pointer, the Lady Warriors got two breaks.

First, the officials missed Abby Rottman stepping on the baseline when she threw the inbounds pass. By rule, the ball should have gone over to Redbank Valley right there.

Then, the officials ruled that a Redbank Valley player tipped the long pass out of bounds giving Moniteau the basketball at the other end of the court.

But a Pry 3-pointer from about 25 feet was just off the mark ending the game.

It was a back-and-forth affair with Redbank Valley using a strong inside game led by Alivia Huffman and Madison Forninger – the duo combined for 29 points and 21 rebounds including 13 immediate second-chance points (points that were scored immediately off an offensive rebound by one of the two).

Foringer did most of the damage on the second-chance points scoring 11 of her 15 on putbacks with eight of her 10 rebounds being on the offensive end.

“Madison is big inside,” Edmonds said. “We knew she was going to have a good battle with Pry tonight. I think both of them went back-and-forth against each other.”

But while Redbank Valley was going inside, Moniteau went outside in the first knocking down six 3-pointers in the half – three each from Jewart and Zoey Hillwig.

That outside presence allowed the Lady Warriors to go ahead 32-28 at halftime when Hillwig broke a 26-all tie with back-to-back 3-pointers late in the half. Hillwig finished with a career-high 13 points.

Redbank Valley, though, was able to slow down the Moniteau outside game in the second half limiting the Lady Warriors to only Jewart’s late desperation 3-pointer.

“He (Edmonds) just wanted us to move more up top and try to get more bodies on the shooters,” Rearick said. “Just keep the shooters from shooting.”

While Moniteau went cold from deep after the break, Redbank Valley, thanks to Rearick, warmed up hitting five third-quarter triples.

Ryleigh Smather’s 3-pointer, her only made shot of the game, late in the quarter gave the Lady Bulldogs the lead for good, 46-45.

“It’s so great (to play in a game like this),” Rearick said. “We already know we are going to see them in the playoffs for 3A. We need to just keep doing what we are doing and shut them down.”

NOTES: Emma Huffman led Redbank Valley with 12 rebounds while adding four points helping the Lady Bulldogs outrebound Moniteau 45-41 including 20 to 14 on the offensive glass … Jewart’s 12 points was a career-best for the freshman … Moniteau is back in action Tuesday at Karns City, while Redbank Valley will be at Shenango Monday … The teams are slated to play again Feb. 27 at Redbank Valley.

Feb. 12, 2021 D10 Hoops: Sharpsville’s Doyle Hits 1,000-Point Mark as Blue Devils Edge Grove City; Adams Has Big Game in Franklin Victory
Feb. 13, 2021 District 9 and District 10 Basketball Scores
This website or its third-party tools process personal data.In case of sale of your personal information, you may opt out by using the link Do not sell my personal information.
×
Manage consent