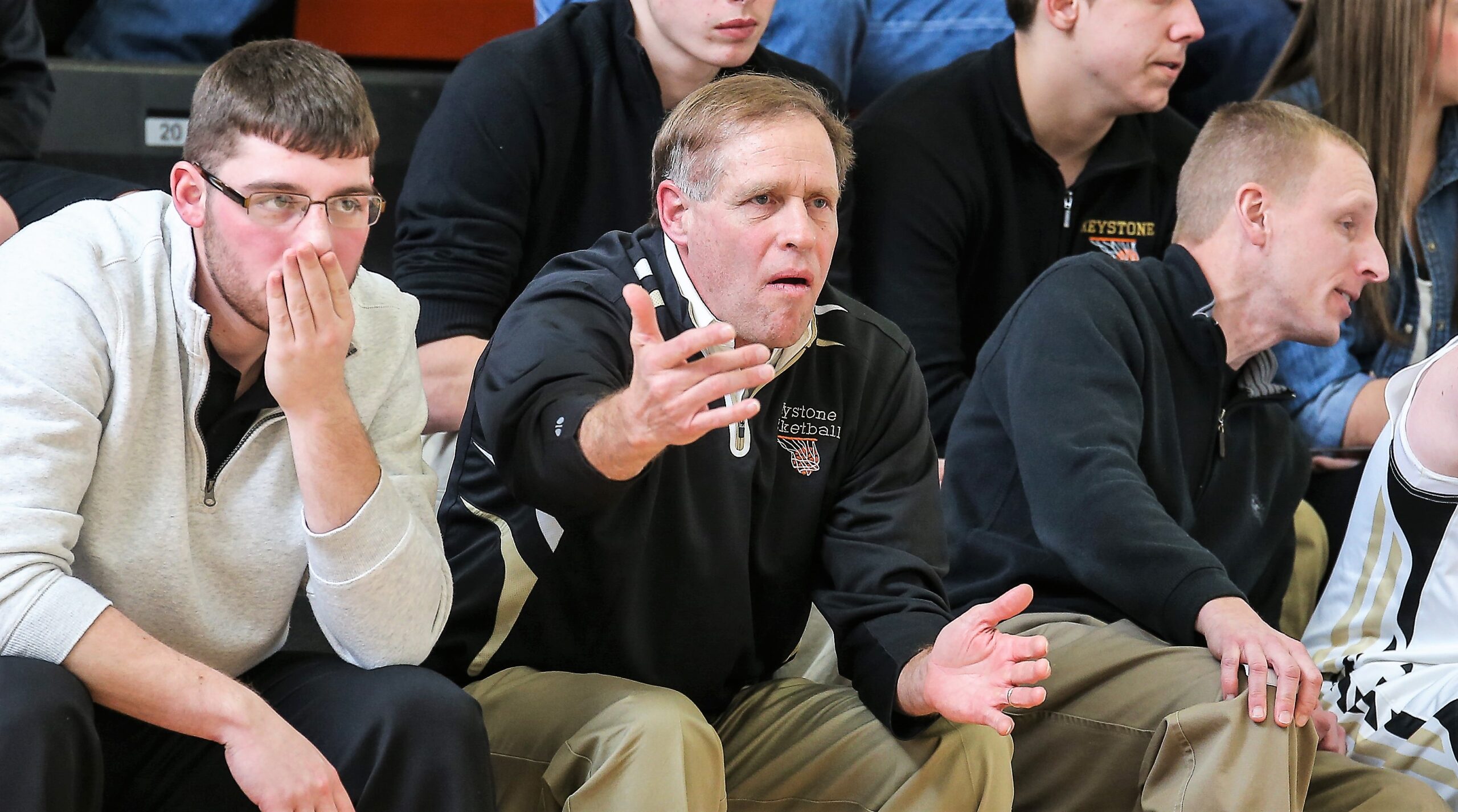 Greg Heath coaching a game prior to this season. Photo by Mike Schnelle

KNOX, Pa. – From an accountant at US Steel to now tied as the winningest boys’ basketball coach in Clarion County/KSAC history.

It’s been quite the ride for Keystone’s Greg Heath.

Heath’s Panthers won the legendary coach game No. 638, 59-32 over visiting Cranberry Tuesday night, tying him with another legend, Union’s Don Stemmerich, for the most ever in league history and the second-most in District 9 history behind Elk County Catholic’s Aaron Straub.

“I can guarantee you it was the last thing I was thinking about tonight,” a very humble Heath said. “It means a lot (to be mentioned with Don Stemmerich). In my book, Coach Stemmerich is the best. He was not only a great coach but a great man. I learned an awful lot coaching against him. I put him up on a pedestal. I really do. He is terrific. So, if we are going to honor somebody tonight, let’s honor Coach Don Stemmerich. He is terrific.”

Heath said he learned a lot from Stemmerich.

“The way he interacted with his players and the officials,” Heath said. “He was very good about working officials the right way. The way he tried to gain momentum for his teams. The little things he would do and the timing of those things. A lot of little things that just add up to a lot, really.”

Heath’s interactions with Stemmerich went back to Heath’s playing days at Keystone and continued when Heath became a head coach, and the veteran Keystone mentor puts him on the top of a list of great coaches he learned from.

“I obviously looked up to him,” Heath said. “Ron Botz at A-C Valley. He did a real good job. My own coach, Chuck Myers, I thought he did a terrific job. I learned a lot from him also.”

Heath journey to coaching and teaching – he recently retired from Keystone after 30-plus years as history teacher – started on the girls’ side in a helping out role that he wouldn’t even consider a coaching stint.

“Jim McConnell was the girls’ varsity coach (at Keystone),” Heath said. “I wasn’t a volunteer assistant or anything like that. I just helped him out at times. I thought, I really kind of like this, and Jim kind took me under his wing and pushed me in that direction.”

McConnell was also a big reason Heath became a teacher.

“He is the reason I got into education in the first place,” Heath said. “The first part of my career, I was accountant with US Steel. I didn’t like it, and Jim said ‘I know something you would like. Why don’t you think about education.’ That is the direction I went, and I am so happy I did. I really enjoyed it.”

The way Heath’s career started, there probably wasn’t anyone, including Heath, who thought he would get to 638 wins.

The Panthers won a grand total of five games combined between the 1985 and 1986 seasons going 5-35. But those two losing campaigns have turned out to be 40 percent of the total number of losing seasons Heath has had in what is now his 37th year as head coach.

“I didn’t even thing about any of that at that time,” Heath said. “You are just thinking survival then. You kind of start to doubt yourself after two seasons like that. But I wouldn’t trade those two seasons for anything. It was an important learning process for me. I really, really enjoyed the players on that team.”

Things quickly turned around for Heath and the Panthers over the next couple of years.

In 1989, the Panthers won their first District 9 title under Heath while going 24-3 and followed it up with a repeat championship the next year with a 25-2 mark.

Jason Say was a player on those teams and is a volunteer assistant coach now.

“He deserves it,” Say said. “Heck no (you didn’t know he was going to have this many wins when I played for him). I knew he was a good coach. I don’t think anybody can say this guy is going to get 600 wins. Those guys are a one in a million. To be here and to be a part of the team this year has been special.”

“There never is just one thing,” Say said. “But there would be two main things I would point to. One is, he is more concerned about a kids character than he is wins and losses at the end of the day. He cares about the kids genuinely. It is about creating better human beings. That is one of the best things about him. Secondly, I am a fairly new coach, and I come from the old school. I say we need to yell and scream at these guys, and we did to do this, and put them on the line and make them run. He has really evolved over the years. When I played for him it wasn’t uncommon for a piece of chalk to fly by your ear or an eraser. That doesn’t happen quite as often anymore. He has really evolved to get the most out of his kids every single year.”

Pat Irwin, whose Cranberry team surrendered win No. 638 to Heath, is another former player whose dad, Bill, was a longtime assistant coach of Heath’s who is now the athletic director at Keystone.

“Coach Heath I hold in the highest regard,” Irwin said. “He has really set the standard for a lot of people and coaches in District 9. To be a part his teams growing up and to be able to coach against him is a privilege.”

Irwin said he wished had been more of a “sponge” when he was in high school playing for Coach Heath.

“You learn a way to play basketball,” Irwin said of growing up around Heath. “I wish I would have been more of a sponge as a 17 and 18 year old. I have learned a tremendous amount about the game of basketball from Coach Heath.”

Heath’s current players were honored to be part of history.

Logan Sell, another senior, said it is a great milestone.

“That only for us, but for Coach Heath in generally,” Sell said. “Humble guy, he won’t even bring it up, probably not even at practice tomorrow. I think it just really brings the community together to have a man like him at the hierarchy of our program.”

The players said it is awesome playing for him.

Easton said one of the best things about Heath is no practice is the same.

“It’s fun, its energetic,” Easton said. “He is awesome with us, and we love him.”

Hogue said Heath is one of the biggest influences in the players lives.

“He is a great mentor,” Hogue said.

“He is definitely someone we look up to, that’s for sure,” Easton added.

Watch the interview with the seniors

Heath said he would be remiss if he didn’t talk about the assistant coaches he has had over the years. So much so that he asked to continue the interview after it was initially concluded.

“It has meant everything (to have such great help),” Heath said. “It makes it so much easier when you have people there who you can trust and who are very knowledgeable about basketball.

“I have had some great ones. I have had a bunch of them, but the guys that have had the most longevity – Bruce Turk was with me for a long time and did a terrific job before going on to coach our girls’ team. Bill Irwin was a terrific assistant coach and was with me a long time. Matt Clark, who is my current assistant has probably been there longer than anybody. When you have Matt Clark beside you, it’s like having a second head coach. He would be a terrific head coach in his own right if he so wanted that. But he seems content where he is at. I am very appreciative for what all of those guys did, and I am very appreciative about what Matt Clark does for me now.”

The game itself started out slow for Keystone with the teams tied at six midway through the first quarter.

But an 8-2 run to end the first quarter gave the Panthers a 14-8 lead at the end of one with Colin Say, Jason’s son, and Bret Wingard each scoring four points during the run which gave Say eight in the quarter.

The run grew to 17-2 at the start of the second quarter thanks to another bucket by Wingard on an offensive rebound, a steal and a basket from Zander McHenry, a 3-pointer from Brandon Pierce, and two free throws by Wingard that pushed the lead to 23-8 three minutes into the second quarter.

Cranberry got back within eight, 25-14, thanks to a pair of baskets from Noel Bunyak and a basket from Dane Ley.

But Keystone ended the first half on a quick 6-0 spurt with Say scoring four more points to make it 32-14 at halftime.

Cranberry, however, came out strong after halftime and went on a 10-3 run that featured four points each from JT Stahlman and Cameron Russell to cut the Keystone lead to 35-24 three minutes into the half.

Ley then had a pair of shots that would have cut the lead to single digits just miss the mark before Keystone ended the quarter with a 6-2 spurt that included four free throws to take a 15-point lead, 41-26, into the final eight minutes.

“Patrick (Irwin) is a very good coach,” Heath said. “I thought his team played really, really well tonight. I thought they executed well. You can tell that team is well coached, they really are.”

Up 15 to start the fourth, Sell made sure the lead stayed that way scoring the Panthers first six points of the quarter to build the advantage to 47-30 with 5:29 to play.

Wingard then put the finishing touches on the victory with slam dunk that was part of a game-ending 14-2 run.

NOTES – In an interesting bit of trivia, Stemmerich finished his 38-year coach career with a record of 638-238 and Heath is now 638-239 in his 37th year coaching … Heath will go for the record on his own Thursday when Keystone travels to Clarion-Limestone … Heath has led Keystone to 14 District 9 championship games (nine in Class 2A and five in Class 1A) winning nine of them (six in Class 2A and three in Class 1A).

HEATH THROUGH THE YEARS