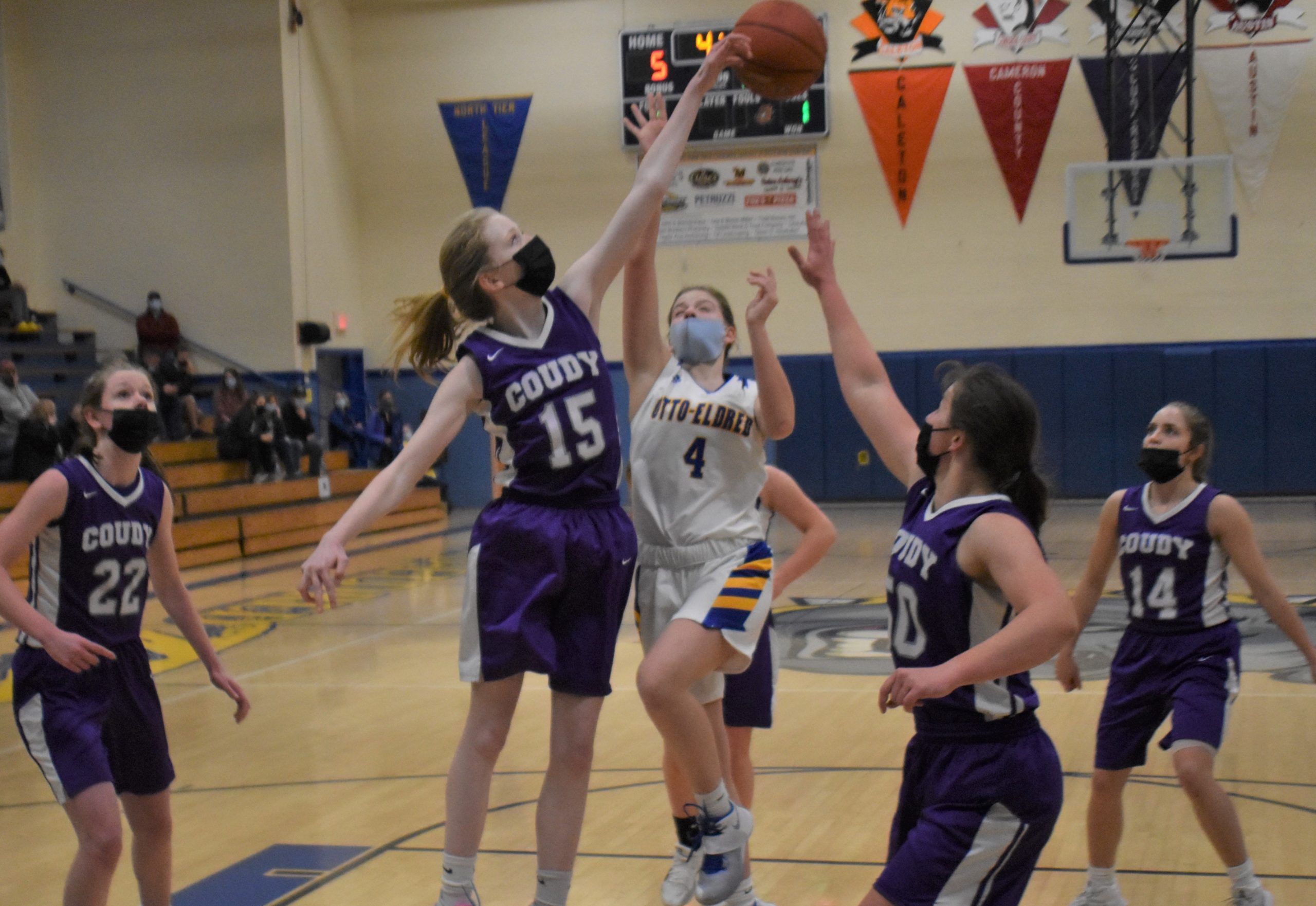 DUKE CENTER, Pa. – After having their 32-game North Tier League win streak snapped at the hands of Otto-Eldred back on Jan. 13, Coudersport was out for revenge against the Lady Terrors on Wednesday.

Thanks to a stellar defensive effort, they got it in the form of a 41-37 victory in a game that had a playoff-like feel to it.

“Defense is a high priority for us and everybody chipped in,” said Coudersport coach Bob Tingley. “We knew it was going to be a tough game.”

Coudersport (14-1 overall, 8-1 NTL) led most of the way, but the lead never got more than nine points in what could best be described as an old-fashioned rock fight.

The Lady Falcons took a 31-22 advantage on a Liz Frame bucket in the third quarter, but O-E (12-3, 5-2) quickly responded with a 6-0 run to get back within three after a Katie Sheeler 3-pointer.

Coudy was able to hold them off, however, despite leading scorer Sarah Chambers saddled with foul trouble.

“When we couldn’t get it at least tied (with Chambers out), I knew we were probably in trouble,” said Otto-Eldred coach Shawn Gray. “What a game, though. We played our butts off. That was the best effort we’ve had all year from everybody. Just way too many turnovers and point-blank misses. We missed a lot of easy buckets and gave up way too many run-outs.”

Frame was the beneficiary of several of those run-outs, finishing with a team-high 13 points

Several times the Lady Terrors’ cut the margin to four, including after a Morgan Dalton 3 with just under two minutes to go, but each time Coudy had an answer, as Chambers (who also finished with six rebounds), Ros Page and Sierra Myers all came up with big buckets in the fourth.

And that aforementioned defense came up big as well, limiting O-E to 24 percent shooting on the night.

“She can really shoot the ball,” Tingley said of the freshman. “We have seven freshmen and sophomores, but we’ve played enough of the season now where they’re starting to get acclimated. Those kids work hard.”

Myers and Frame spearheaded the charge early, scoring six points each in the second quarter. Belle Porterfield also had four points in the first half, as an 8-0 allowed the Lady Falcons to get the lead to the magic number of nine, 23-14.

Otto-Eldred responded, however, thanks in large part to the play of Sheeler, who finished with a game-high 17 points to go along with nine steals, as well as Kaylee Heller and Emmalee Sheeler.

Katie Sheeler’s 3-pointer from the logo, coupled with a late bucket from Reilly Raught just before the final seconds ticked off in the half, cut the deficit to four, 23-19.

Raught was ahead of the pack on the play, slow to get up after appearing to turn her ankle.

Coudersport’s Liz Frame goes up for two of her team-high 13 points.

She gutted it out for the final bucket, but the injury forced her to miss the second half.

“Reilly does a little bit of everything for us,” Gray said. “From making 3’s to taking it to the hole.”

Despite the loss, Gray was happy with his squad’s effort, and knows there’s a chance the two teams could meet for a third time in the District 9 Class 1A playoffs.

“I told the girls coming out before the game, if you don’t think you’re going to get punched in the mouth tonight, having snapped their 32-game winning streak … they had something to come in here and play for,” Gray said. “Hopefully we see them down the road.”