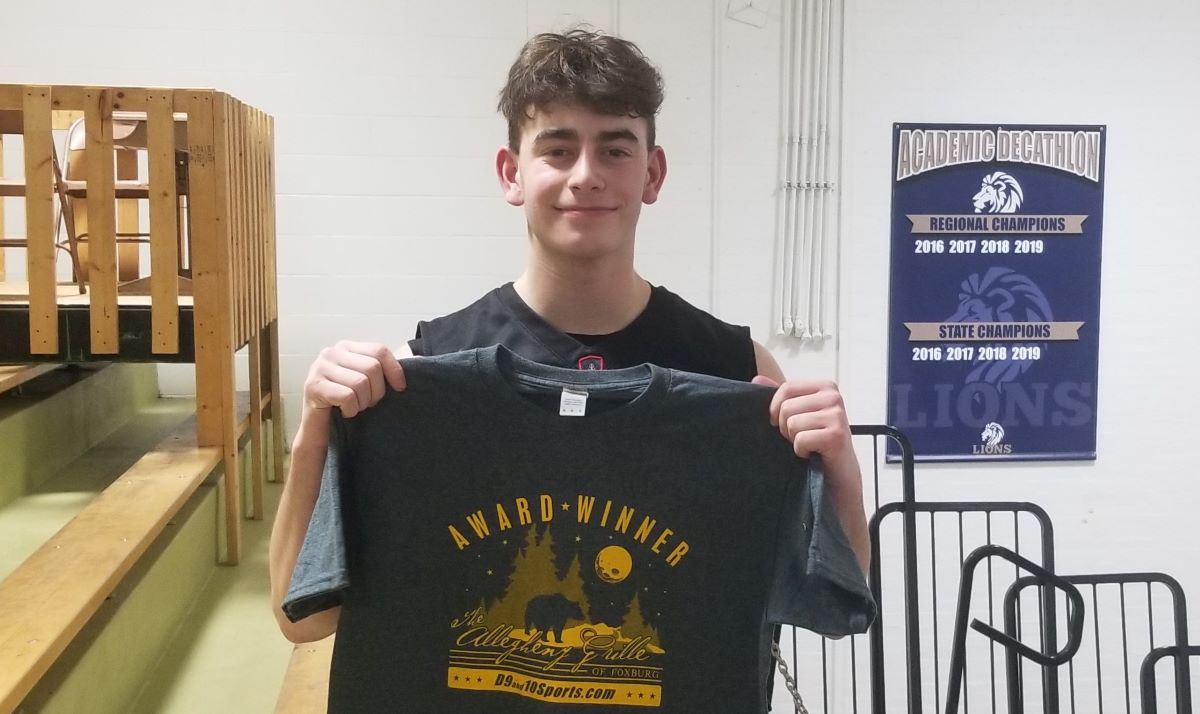 STRATTANVILLE, Pa. – On a night where its shooting was as cold as the weather outside, Clearfield rallied from a five-point deficit late in the third quarter to beat Clarion-Limestone, 45-40, on the road.

The Bison were helped by an injury to C-L star Hayden Callen, who appeared to get injured in the head area after a collision with teammate Tommy Smith late in the third quarter and the Lions leading 32-27.

“It’s tough,” Clearfield’s Ryan Gearhart, who hit a big fourth-quarter 3-pointer in the comeback, said of watching C-L’s star go down. “I pray for him. I hope he is good. Nothing really changed for us. We just kept battling and played our hardest.”

Without Callen, who entered the game averaging over 20 points per game and who had 14 points through three quarters, C-L struggled on offense making just two fourth-quarter baskets.

Meanwhile, Clearfield also made just two baskets in the fourth quarter but got to the free-throw line 14 times in the quarter hitting nine of them while outscoring C-L 16-8 in the quarter.

Gearhart gave the Bison the lead for good, 37-34, when he hit the 3-pointer from the left corner with just over five minutes to play.

“We practice that a lot at practice, big shots,” Gearhart said. “It’s all about focus. We focus a lot.”

Clearfield got the lead to four, 39-35, when Karson Rumsky hit one of two free throws.

But C-L got a monster 3-pointer from senior Hayden Siegel with just under a minute-and-half to play to cut the deficit to one, 39-38.

Moments after the Siegel three, Siegel came away with a steal and fed a breaking Ryan Hummell. But Hummell missed the layup, and the ball became tied up with the arrow in favor of C-L with 1:01 left.

But on Smith’s inbounds pass, Cole Miller tipped the ball to Rumsky, who was fouled with 54.0 seconds left.

Rumsky made both free throws to stretch the Bison lead to 41-38.

After Riley Klingensmith missed a 3-pointer for C-L, Nick Ryan hit one of two free throws for Clearfield to push the advantage to 42-38 with 27.1 left.

Rumsky then stole the ball with 14.0 to play but missed two free throws two seconds later, and on the rebound, Jake Lezzer pushed Smith sending the freshman to the line to shoot with 11.6 seconds left.

Rumsky then hit one of two free throws with 10 seconds to play to make it a 43-40 game.

C-L had a pair of 3-pointers in the final seconds to tie the game with Siegel’s missed triple rebounded by Jordan Hesdon, whose desperation three was partially blocked by Lezzer into the hands of Rumsky with 0.2 of a second left. Rumsky was fouled and hit both to set the final score.

Clearfield trailed 21-20 at halftime before getting down by five a couple of times in the third quarter then rallying.

“We went down at halftime and talked about it,” Gearhart, who was named the Allegheny Grille of Foxburg Player of the Game said. “Our coach challenged us. We came out and played well in the second half defensively.”

Despite an off-night shooting, Rumsky led all scorers with 16 points and completed a double-double with 11 rebounds. He also had five steals. Miller added eight points, all in the second quarter when he hit a pair of 3-pointers, and seven rebounds, and Gearhart had seven, including five in the fourth quarter.

Feb. 16, 2021 D9 Boys’ Hoops: Weaver Three Late in OT Lifts Punxsy to Win; Rainey Helps Union Beat DCC
District 9 and District 10 Basketball Schedule for Feb. 17, 2021
We use cookies on our website to give you the most relevant experience by remembering your preferences and repeat visits. By clicking “Accept All”, you consent to the use of ALL the cookies. However, you may visit "Cookie Settings" to provide a controlled consent.
Cookie SettingsAccept All
Manage consent