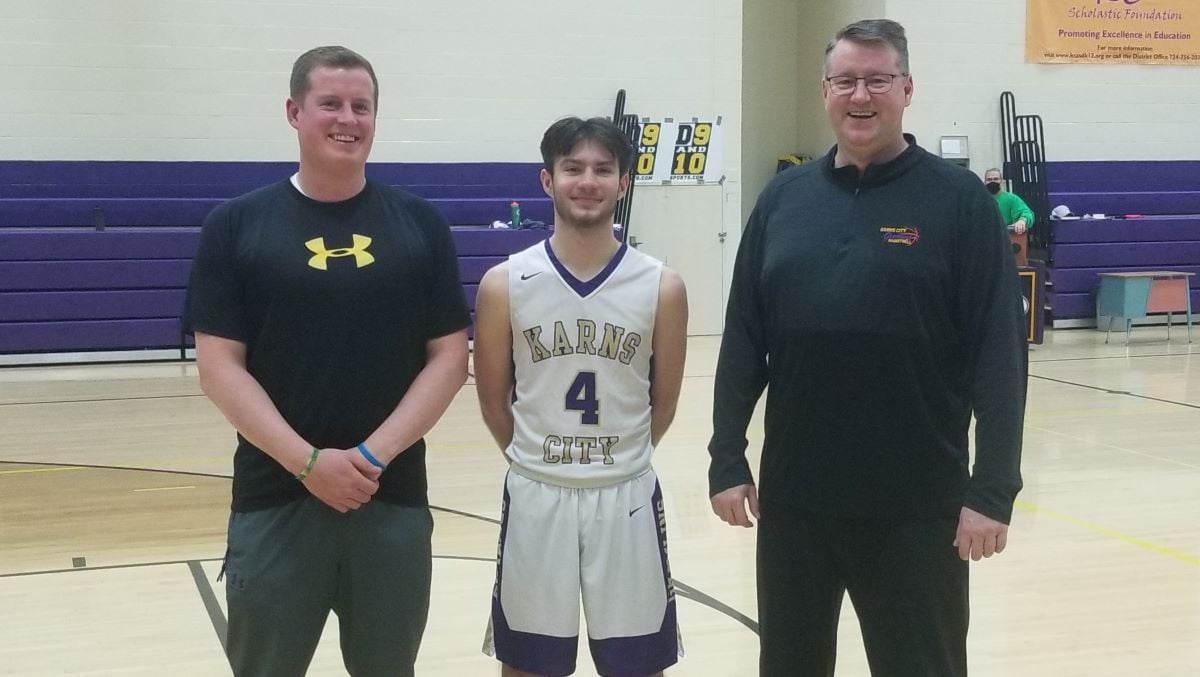 Beighley finished the night with 20 points, seven assists, six steals, and two rebounds while leading the Gremlins to a 65-45 win over visiting A-C Valley. Beighley now has 1,566 career points. Callihan, who was in attendance, finished his career in 2005 with 1,554 career points.

“I knew I had a shot (at the record) last year,” Beighley said. “This year, our goal was to just win the district and win KSACs. We didn’t really think (about the record) ’til’ the last couple of games as it kept getting closer and closer.”

As Beighley looked at the 1,000-point banner hanging on the ball at Karns City’s gym, he said he never really thought about being the all-time leading scorer for the Gremlins when he started playing.

“My freshman year, my goal was just on that banner,” Beighley said. “Now, it’s just crazy that I am on the top of that.”

Chase Beighley (center) with his parents after setting the Karns City school record for scoring Monday. Photo by Al Modrzjewski

Beighley, who grew up living next door to Callihan’s parents and lived next to them until recently, was happy Callihan could be in the gym to witness history and had great things to say about the former Gremlin star.

“It was amazing (that he was here),” Beighley said. “I have played in open gyms against him. He is a phenomenal player. It meant a lot because he did hold that record for the last 16 years.”

The night was more than just about Beighley’s school record, as both teams viewed it as their opportunity to claim the mantel as the best team in the KSAC. Without a KSAC Championship game this year, both coaches, in the pregame, talked about how their teams were viewing Monday’s contest as a de facto KSAC TItle game since Karns City won the KSAC Big School Division and A-C Valley the Small School Division.

Beighley reiterated that in the postgame.

Karns City wasted little time showing it was the top dog scoring the game’s first nine points while building a 19-6 lead at the end of the first quarter.

“We are usually a hot-starting team,” Beighley said. “Tonight was no different. Once we feel like we get a lead, we feel like we are very comfortable not to let that lead go. We proved that tonight.”

The Gremlins were helped by the fact A-C Valley star and the leading scorer in District 9, Levi Orton, picked up two fouls in less than two minutes at the start of the game and was forced to the bench for the remainder of the first quarter.

Orton came back in the second quarter and helped get the Falcons offense back on track scoring eight of their 13 points in the quarter.

But Karns City still led 33-19 at halftime thanks to Beighley who got hot late in the first quarter hitting a pair of 3-pointers and then carried it over into the second quarter with six more points giving him 12 in the opening half.

“It’s amazing (when you get in that grove),” Beighley said. “At least it feels like every single shot take looks like it going in and it feels like it is going in. It’s awesome to get into that type of grove.”

Karns City maintained the lead at 13, 47-34, heading to the fourth quarter before Orton opened the fourth with a 3-pointer to get the game within 10.

The Falcons then got within nine, 51-42, after Orton hit one of two free throws, and A-C Valley had a chance to cut the lead to six twice. But Tanner Merwin and Orton both missed 3-pointers, and Karns City finished the game on a 14-3 run that included five points from Micah Rupp, four from Nathan Waltman and two points and three assists from Beighley.

The Gremlins are back in action Wednesday when they host Union, while A-C Valley will try to end a three-game losing streak Tuesday when it hosts Venango Catholic.

RIMERSBURG, Pa. – Clarion-Limestone built a 17-point lead at the end of the first quarter on its way to a 58-49 win at Union.

The Lions led 21-4 at the end of the first quarter thanks to eight points from Hayden Callen, six from Jordan Hesdon, and five from Tommy Smith.

Feb. 22, 2021 D9 Girls’ Hoops: C-L, Karns City Hold on For Wins
Clarion HS, IUP Grad Taylor Leads Team Poland to FIBA EuroBasket 2022 as Head Coach
We use cookies on our website to give you the most relevant experience by remembering your preferences and repeat visits. By clicking “Accept All”, you consent to the use of ALL the cookies. However, you may visit "Cookie Settings" to provide a controlled consent.
Cookie SettingsAccept All
Manage consent