Farrell heads to Karns City for Class 2A quarterfinal 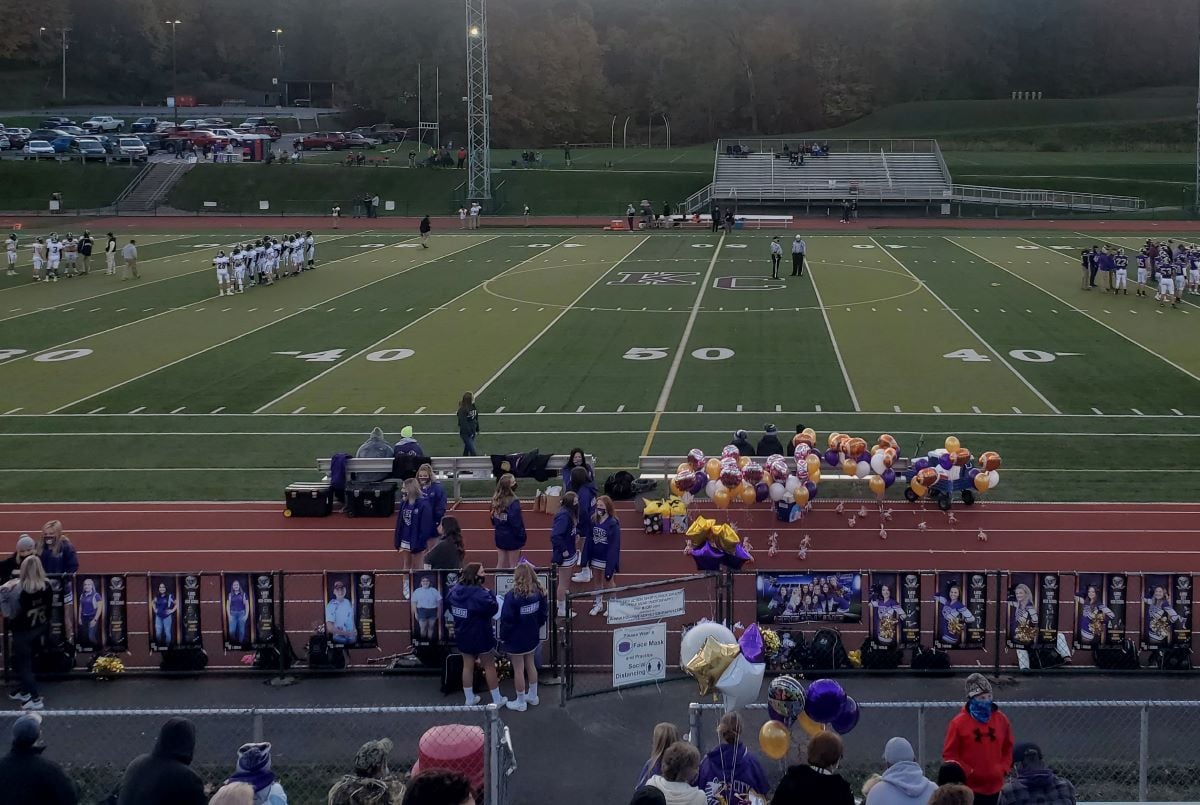 Karns City's Diehl Stadium is the site of Friday night's PIAA Class 2A quarterfinal matchup between the Gremlins and District 10 champion Farrell.

KARNS CITY, Pa. — There’s a mountain of history that favors the Farrell Steelers in Friday night’s trip to Karns City for their PIAA Class 2A quarterfinal playoff game.

While the 10-0 Steelers and 11-1 Gremlins have never met on the gridiron, Farrell’s historical playoff matchups against D9 teams is spotless at 10-0. The last matchups with a D9 champion was back-to-back years in their 2018 and 2019 state title runs in wins over Coudersport — 48-6 and 28-0.

Kickoff Friday is set for 7 p.m. in Butler County. While the game site is a curious mixed move by the PIAA which is using some home sites in other parts of the state bracket, the Gremlins did travel to Wilmington for last year’s first-round matchup that the Greyhounds won, 42-14.

The other side of the bracket has Northern Lehigh facing West Catholic and District 6 champion Richland visiting state champion Southern Columbia, both on Friday. Southern Columbia is chasing after a fifth straight state title. Richland and Beaver Falls are the other teams that made it this far last year.

So naturally, being in the quarterfinal round is familiar territory for the Steelers, who knocked out last year’s D10 champion and state finalist Wilmington by avenging their 19-14 loss in last year’s D10 final with a second blowout win over the Greyhounds this year in a 48-6 rout.

While Karns City was securing its second straight D9 title with a 35-7 win last week against Ridgway also at home, Farrell had its first test of the season in a 24-7 win over Pittsburgh City League’s Westinghouse at Cupples Stadium in Pittsburgh.

The Steelers trailed for the first time all year, 7-6, at the 7:35 mark of the third quarter. Otherwise, it’s been a dominating season for a team that’s outscoring its foes by an average margin 53-6, and giving up just 117 yards per game — thanks to professorbriggs.com.

Farrell has allowed just nine TDs all year, just one of them via the pass.

Offensively, the Steelers are led by 5,000-yard career rusher Anthony Stallworth, who went over 2,000 yards for the season last week. He’s at 2,018 yards with 28 TDs, averaging a whopping 13.8 yards per carry. Stallworth’s average is actually only slightly higher than the team’s overall average.

Quarterbacks Kabron Smith and Trian Holden have combined to throw for 1,025 yards and 21 TDs on just 95 passing attempts. Smith is 34-for-56 for 495 yards and eight TDs against three interceptions while Holden stands at 28-for-39 for 530 yards and 13 TDs with no interceptions.

Kylon Wilson, who has rushed for 245 yards on just 14 carries, is the top receiver at 36 catches for 658 yards and 13 TDs. Wilson has returned two of his three kick returns for touchdowns as well as two of his three interceptions on defense.

Farrell has punted just five times all season, three of them coming in last week’s win over Westinghouse in which Stallworth ran for 115 yards on 30 carries and Wilson rushed for two TDs with 73 yards on just four carries.

Karns City has won seven straight games since its lone blemish in a 35-28 loss to St. Marys back on Oct. 1. The Gremlins threw just three passes last week and five in its two playoff wins against Central Clarion and Ridgway, so they’re relying on their traditionally strong running game to get the job done.

Quarterback Eric Booher has rushed for 311 yards and two TDs while completing 54 of 95 passes for 954 yards with 10 TDs and six interceptions. Micah Rupp (21-453, 6 TDs) is Booher’s top receiving target.

Garing (7.6) also leads the Gremlins’ defense in tackles per game with Luke Cramer (7.1), Anderson (5.9) and Cooper Croyle (5.1) also leading the unit in stops. Rupp and Garing share the team lead in interceptions with three.

Redbank Valley Looks to Take Next Step into PIAA 1A Semifinals when it Rematches with Northern Bedford Powered by Subway in New Bethlehem
Region Football All-Stars Named in District 10
We use cookies on our website to give you the most relevant experience by remembering your preferences and repeat visits. By clicking “Accept All”, you consent to the use of ALL the cookies. However, you may visit "Cookie Settings" to provide a controlled consent.
Cookie SettingsAccept All
Manage consent