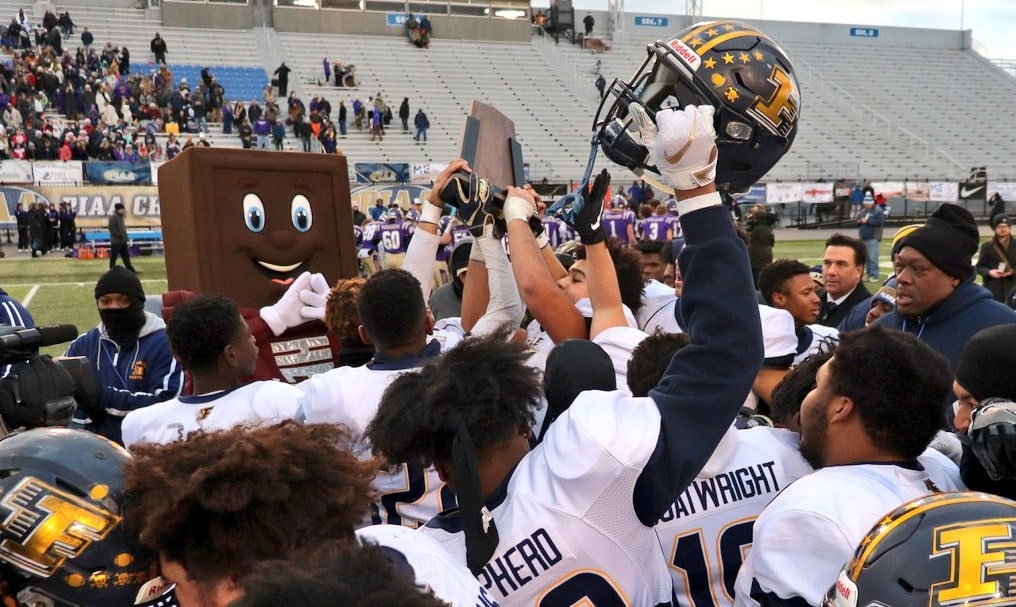 FARRELL, Pa. – When you’re a program that has a tradition like Farrell, you know what is expected when you pull the uniform over your pads.

But even for a program that has had as much success as the Steelers have, their recent run is something special. The current senior class has lost just one playoff game (last year to Wilmington in the D10 Class 2A title game), winning state titles in 2018 and 2019.

Those championship games came in Class 1A. This time around, the Steelers are looking for gold in Class 2A, having been bumped up to Class 2A as a result of the PIAA’s competitive balance formula.

“It’s just something we had to deal with,” said their head coach, Amp Pegues. “Schools should have the option to move up on their own.”

Their motivation to get back to Hershey has been building ever since that loss to the Greyhounds last season. They’ll have the chance to get

“It fueled them a lot,” said Pegues. “My seniors, that was their first playoff loss. To have a senior class that only has one playoff loss…they weren’t used to that. They worked really hard in the offseason and that’s all working out for us right now.”

So what about that class, in particular, makes them special?

“It’s a group that’s been playing together for a long time,” Pegues said. “A lot of them started playing together around the same time. They’re very close-knit. They hang out together, spend a lot of time together and when you do that, it makes playing on the football field that much easier.”

The success that has come before them is for many of the same reasons – community, family, togetherness and hard work.

Pegues knows all about that, having played quarterback on the 1995 state championship Farrell team.

“There’s a lot of community support,” Pegues said. “A lot of the kids that come through here had a dad, uncle or older brother that came through the program. You hear a lot of the same last names.”

That not only extends to the players but the coaches as well.

“The coaching staff, most of them are Farrell grads,” he said. “They’ve stayed around and they want the best for the kids. That’s something a lot of the great programs throughout the state have. A lot of them are built that way. When you add in good coaches who would do anything for those kids, you can build a program like that. That’s what makes this program great.”

That greatness has continued this season, as the Steelers have racked up the wins, most of them in blowout fashion. The last two weeks have found tougher sledding in a 24-7 win over Westinghouse, followed by last week’s 30-12 quarterfinal win over Karns City.

“When you get to this point of the year, you’re going to play better teams,” Pegues said. “That’s just part of it. We definitely want to come out and start fast and if we can, we can be a problem for people. Everything’s not going the way you want it, but good teams find ways to win. The job is just to win and advance, not necessarily win pretty.”

And it doesn’t hurt that this group has been here before.

“My senior class, they’ve played in this game twice already,” Pegues said. “As a program, we’ve been in this game seven times in the last eight years. It takes a lot to get here. This isn’t foreign territory. It isn’t going to help you win the game, but you know what to expect.”

And of course, there’s that motivation of getting back to Hershey.

“We’re really motivated,” Pegues said. “That’s been our talk all season. That’s something that we’re really focused on. Not only getting there but winning it.”