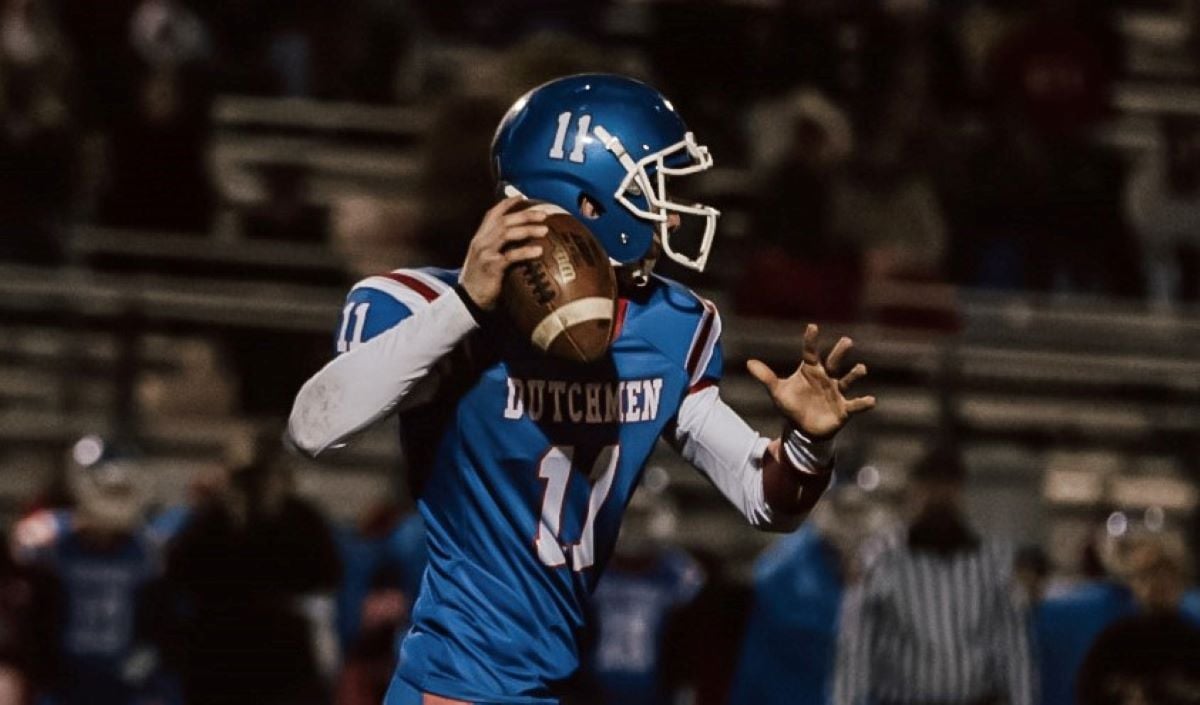 DUBOIS, Pa. – With its season on the line, St. Marys put together the drive of the year to beat Punxsutawney, 12-7, in the District 9 Class 3A semifinals at Mansell Stadium in DuBois.

Trailing 7-6, the second-seeded Dutch (7-3) got the ball and their own 20-yard line with 11:07 to play following a missed 42-yard field goal by Punxsutawney’s Peyton Hetrick and proceeded to march 80 yards in 18 plays chewing up 9:23.

A 1-yard QB option run by Charlie Coudriet ended the drive with 1:44 to go, which was fitting considering Coudriet did most of the heavy lifting on the season-defining march.

Of the 18 plays, he was involved in 12 of them including eight runs and four passes.

That included a 15-yard pass to Collin Reitz on third-and-10 from the 20-yard line early in the drive, a 3-yard QB sneak by Coudriet with 7:42 to play on fourth-and-1 from St. Marys’s 44, and an 11-yard Coudriet to Carter Chadsey pass with on second-and-11 from the Punxsutawney 44-yard line.

The other big player on the drive was Justin Dornisch, whose 12-yard run gave St. Marys a first-and-goal at the 10. He followed that up with a 3-yard run to the 7 before Coudriet went to the 1-foot line and then scored on the next play.

Punxsutawney (6-5) had one last gasp at life after an unsportsmanlike penalty on St. Marys gave the Chucks the ball at the Dutch 48-yard line.

A 7-yard run by Zeke Bennett got the ball to the 41 before a false start on what might have been a first-down run by Bennett moved the ball back to the 46.

Two incomplete passes followed to seal the victory for St. Marys, who will play Clearfield in next week’s title game at a time, site, and date to be determined.

St. Marys led 6-0 at halftime thanks to a 75-yard touchdown pass from Coudriet to Chadsey before Punxsutawney took a 7-6 lead in the third quarter on a Maddox Hetrick to Noah Weaver.

But the Chucks played the entire second half without quarterback Seth Moore. They did move to inside the 25 early in the fourth quarter before Peyton Hetrick’s missed field goal,

Coudriet had a big game for St. Marys with 191 yards passing and 55 yards rushing with Chadsey picking up 97 yards receiving.

Bennett ran for 98 yards for Punxsutawney.

CLARION, Pa. – Scoring three times in the final five minutes of the first half, the Brookville Raiders used big plays and another strong performance from Noah Peterson in a 31-7 win over Karns City at Clarion University’s Memorial Stadium.

Next up for the Raiders, who started the season 0-3 and 1-4, is Central Clarion in next week’s District 9 Class 2A Championship game at a site and time to be announced.

The Raiders (6-5) opened the season with a 42-7 loss to the top-seeded Wildcats, who had a first-round bye.

“I always thought if we were healthy, going into the season, that we would be here (in the final),” said Raiders head coach Scott Park, whose team beat the Gremlins 34-7 three weeks ago. “To take all that adversity we’ve had with injuries week in and week out, to be standing here, I’m so proud of the team because they didn’t give up. Lots of times, teams in that situation give up. I said this before, but deep down they all knew we just had to get healthy and credit goes to my coaches for keeping them working hard and getting them to believe they were meant to be here.”

Peterson, the Raiders’ third different starting quarterback this year after season-ending injuries to Charlie Krug — Krug was lost in the opening loss to Central Clarion — and Easton Belfiore, threw two touchdown passes to freshman Hayden Freeman while completing 13 of 16 passes for 197 yards.

Peterson’s first hookup with Freeman came on a 2nd-and-16 play from the Raiders’ 16. Freeman took a short pass from Peterson and outran the Gremlins defense to tie the game after Brayden Kunselman’s point-after kick with exactly five minutes left in the second quarter, two plays after a roughing the kicker penalty on a Raiders punt extended the drive.

After forcing a Karns City punt, the Raiders went ahead for good when a seven-play drive finished on Peterson’s 11-yard TD pass to Freeman, who had three catches for the season going into the game.

With still time left in the half, the Gremlins elected to go to the air, and on the first play after the ensuing kickoff, Peterson intercepted Gremlins quarterback Eric Booher for the second time and raced 42 yards to the end zone for the 21-7 lead with 21 seconds left in the half. It was Peterson’s ninth interception of the season.

The Raiders scored twice in the fourth quarter to set the final as Kunselman kicked a 20-yard field goal and Tony Ceriani had a 9-yard TD run.

Karns City’s touchdown came in the first quarter. The Gremlins took the opening kickoff to the Raiders’ 15 where on third-and-11, Booher’s pass was intercepted at the goal line by Peterson who returned the ball to the Raiders’ 38 but fumbled it away to the Gremlins.

From there, the Gremlins went 38 yards on six plays and scored on Booher’s 22-yard pass to Nate Garing on fourth-and-eight with 5:22 left in the first quarter.

But Karns City managed just 97 yards and three first downs the rest of the game.

Brookville outgained Karns City, 343-174. Kunselman caught six passes for 53 yards with Freeman’s TD catches accounting for his total of 95 yards. Jackson Zimmerman went over 1,000 yards rushing for the season, going for 58 on 15 carries — he’s at 1,038 — while Carson Weaver ran for 43 yards on nine carries.

Levi Hawk ran for 61 yards on 14 carries to lead Karns City, which finished 6-5.

Back-to-Back: Simmons, Meadville Take Early Punch, Race Past Corry for D10 4A Title
D9 1A Playoffs: Keystone Wins First Postseason Game Since 1989; Fox Tosses 7 TDs in Brockway Rout
This website or its third-party tools process personal data.In case of sale of your personal information, you may opt out by using the link Do not sell my personal information.
×
Manage consent