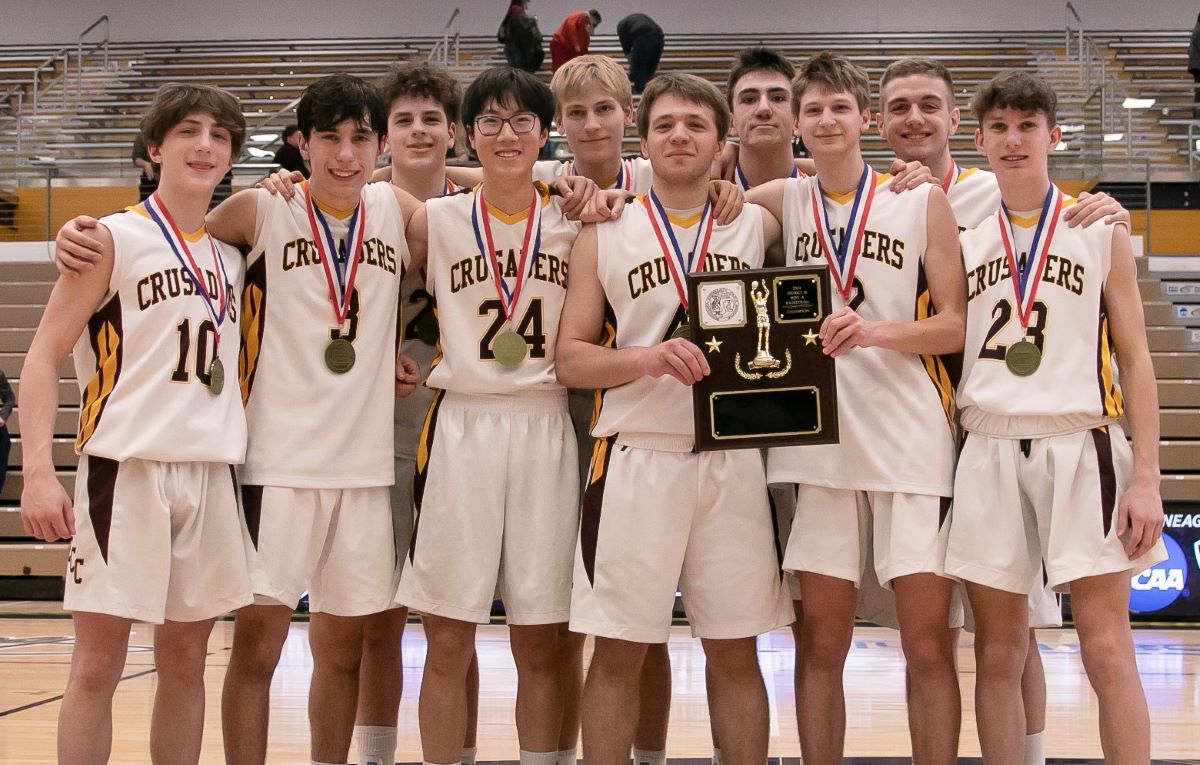 It’s a Crusader vs. Crusader matchup for a berth in the PIAA Class 1A state championship game when the Elk County Catholic boys battle Bishop Canevin at Clarion University’s Tippin Gymnasium (7:30 p.m.)

On an interesting note, this is the third time a District 9 champion will take on Canevin in a state semifinal this season, with the Redbank Valley football team and Clarion volleyball teams both earning victories.

It’s a Canevin (23-4) team that, after a pair of blowout wins over District 9 foes Johnsonburg and DuBois Central Catholic, earned a 53-45 win over Imani Christian in the quarterfinal round.

They have an interesting mix of freshman and seniors, led by 6-6 senior Jaden Gales, who checks in at 17.1 ppg., as well as 6-2 senior guard Kevaughn Price (15.1 ppg.). They also lean heavily on freshmen guards Amari Evans and R.J. Sledge.

“They are very athletic, very long, very quick, and very good,” said Elk County Catholic coach Aaron Straub. “They remind me of, the depth of a Brookville. They run people in and they don’t lose much. They are the real deal.”

Elk County Catholic, which is making its fifth appearance in a state semifinal game (all under Straub), and first since 2009, has turned it into a different gear in the postseason.

After a loss to Ridgway in the AML title game, the ECC (25-5) rattled off wins over Clarion, North Clarion, and DuBois Central Catholic to take the D9 title, followed by wins over Rochester, Farrell, and Union (New Castle) to get to this point.

“You’re never as bad as you think you are when you lose,” Straub said. “We really just re-focused (after the Ridgway) game. We said we had eight games left and let’s make the most of it. We’ve done a better job with our physicality, that’s important, and we’ve played together well. These kids have been all in all year.”

Senior captains Charlie Briendel and Luke Jansen have been leaders for ECC, with Briendel taking his game to another level in the playoffs. He scored a career-high 28 points in the win over Farrell and followed that up with 24 in the overtime win over Union (New Castle).

“We have a great leader in Charlie and certainly Luke as well,” noted Straub.

“The kids have really been locked in and it’s going to take a really good effort,” I think they are up to that task. We have to eliminate their transition game. If we don’t, they’ll score some easy baskets. Championship games and big games always come down to rebounding. We need to get shots. We need to not give up easy baskets and we need to make sure we rebound.”

The Crusaders are 1-3 in state semifinal games, but Straub notes that this team has similar qualities to the others that have got to this point.

“We were only successful the one time and won the state title in 2006,” he noted. “Our 1988 team was very good that we lost to Monessen at Central Cambria. We played a very good team. in 92 against Duquesne. The 2009 team lost to Kennedy Catholic. In this round, you play very good teams. The Blairsville team we played in 2006 was a great team. This year’s team is certainly every bit as focused as those teams. We probably had a little bit more depth on those teams. We’ve been able to stay healthy. The guys have put in so much time in the offseason and are looking forward to this challenge.”

This is the first time since 2013 a District 9 team has made an appearance in the semifinal round, with Johnsonburg knocking off Lincoln Park that year. In 2012, Lincoln Park beat Ridgway and before that, DuBois Central Catholic beat Kennedy Catholic in 2007.

The winner will meet the winner of the Nativity BVM (11-1) and St. John Neumann (4-1) winner in the state championship game at Hershey’s GIANT Center on Thursday (March 24) at 2:30 p.m.

“This has been a great group to coach,” Straub said. “If the coach has to motivate the team, you’re not going to be successful, but if the players motivate the coach, the team has a chance to be really good. This year’s team has continued to motivate the coaching staff. The good, quality teams that we’ve played have allowed us to have success in the postseason. This group doesn’t take nights off.”

March 18, 2022 District 9 and District 10 Basketball Schedules Powered by Hunter’s Station Golf Club
Clarion’s Best Named February Clarion Rehab/CHAMP Athlete of the Month
This website or its third-party tools process personal data.In case of sale of your personal information, you may opt out by using the link Do not sell my personal information.
×
Manage consent