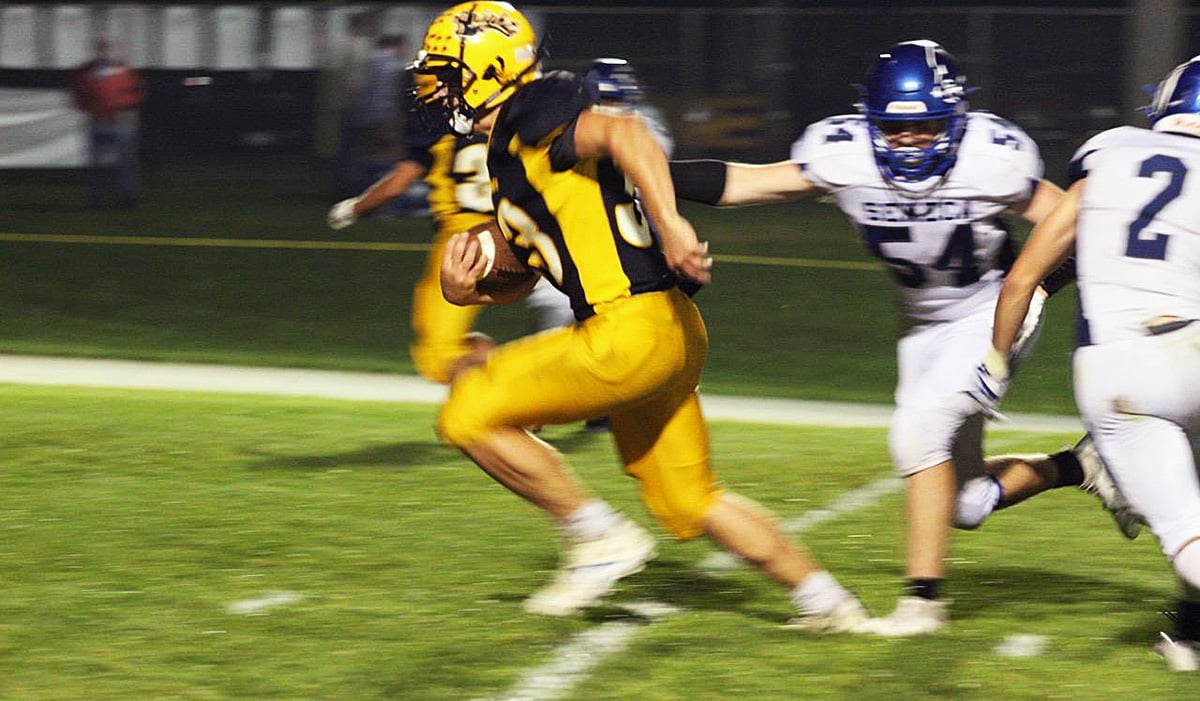 Eisenhower's Benji Bauer ran for 227 yards and a school-record five touchdowns in a win against Seneca. Photo by Steve Younger.

RUSSELL, Pa. – Benji Bauer set a school record for rushing touchdowns in a game, and the Knights ran for over 400 yards as a team in Eisenhower’s 46-34 win over Seneca on Friday.

Bauer scored five rushing touchdowns in the win to set the Eisenhower single-game record. Multiple players had scored four rushing TDs in a game. The last to do so was Ethan Chambers in a 50-34 loss at Cochranton on Oct. 19, 2018.

Watch the game (action picks up midway through the first quarter due to technical difficulties):

The Knights (4-0 overall, 3-0 Region 2) jumped out to a 13-0 lead thanks to Eckstrom’s 50-yard touchdown scamper, on the third play from scrimmage, and a 1-yard Bauer run set up by a 38-yard reception from Kris Bunk.

Eckstrom ripped off his second big run of the night on the ensuing possession, a 46-yarder that set up Bauer’s second touchdown. The PAT kick after Bauer’s 15-yard run failed, giving Eisenhower a 19-7 advantage with 1:15 to play in the first.

Deviating from its typical game plan, Seneca moved the ball through the air and the Bobcats capped the scoring drive with a 5-yard pass from Nolan Seabury to Collin Libra to make it a 1-score game, 19-14, less than a minute into the second quarter.

Bauer needed just two plays to put the Knights back in front by double-digits. He took a first-down handoff and raced 52 yards up the gut before being tripped up at the Seneca 16. On the next play, Bauer finished the job as he ran 16 yards to paydirt.

The Bobcats marched deep into Knights territory late in the second quarter, but Eisenhower’s defense came up with a stop and got the ball back to the offense.

Another long Eckstrom run was wiped out by a holding penalty, but Eckstrom simply took the ball on the next play and got the Knights close to midfield with a 38-yard run. Pascuzzi finished the drive with a 43-yard run after a perfectly executed fake of a jet sweep.

The Knights added to their lead midway through the third quarter on a 20-yard run by Bauer. He found himself in the end zone for the fifth time just over two minutes later to push the Eisenhower lead to 46-14.

Beau Barber fielded the ensuing squib kick and nearly broke free for a score. Still, the Bobcats started the drive in Eisenhower territory and wasted little time putting points on the board. Two plays after a 36-yard pass to Isaiah Cadden, Seabury kept it himself and ran seven yards for the touchdown to cut the lead to 46-21.

Marching toward what looked like a comfortable 30-point lead and a running fourth-quarter clock, the Knights suddenly found themselves on their heels.

Bauer and Pascuzzi mistimed a pitch and Seneca recovered deep in its own territory. Seabury capped off an 84-yard drive with a 13-yard run to inch the Bobcats closer at 46-28.

Seneca recovered the ensuing onside kick and two plays later, Miller burst through the line and raced down the sideline for a 42-yard touchdown run.

Eisenhower took the ball on the ensuing kickoff, and never relinquished possession as the Knights ran out the clock to secure the win.

Miller ran 14 times for 91 yards and two touchdowns. Seabury had 11 carries for 87 yards and two scores. He was also 18-29 passing for 210 yards with a touchdown and an interception.

Bauer doubled his rushing touchdown total and now has 10 TDs on the ground this season.

Week 4 D9 Football Recaps: Domico Perfect in Clearfield Win; Brookville Wins Low-Scoring Affair
Old-School Karns City Holds Off St. Marys
This website or its third-party tools process personal data.In case of sale of your personal information, you may opt out by using the link Do not sell my personal information.
×
Manage consent