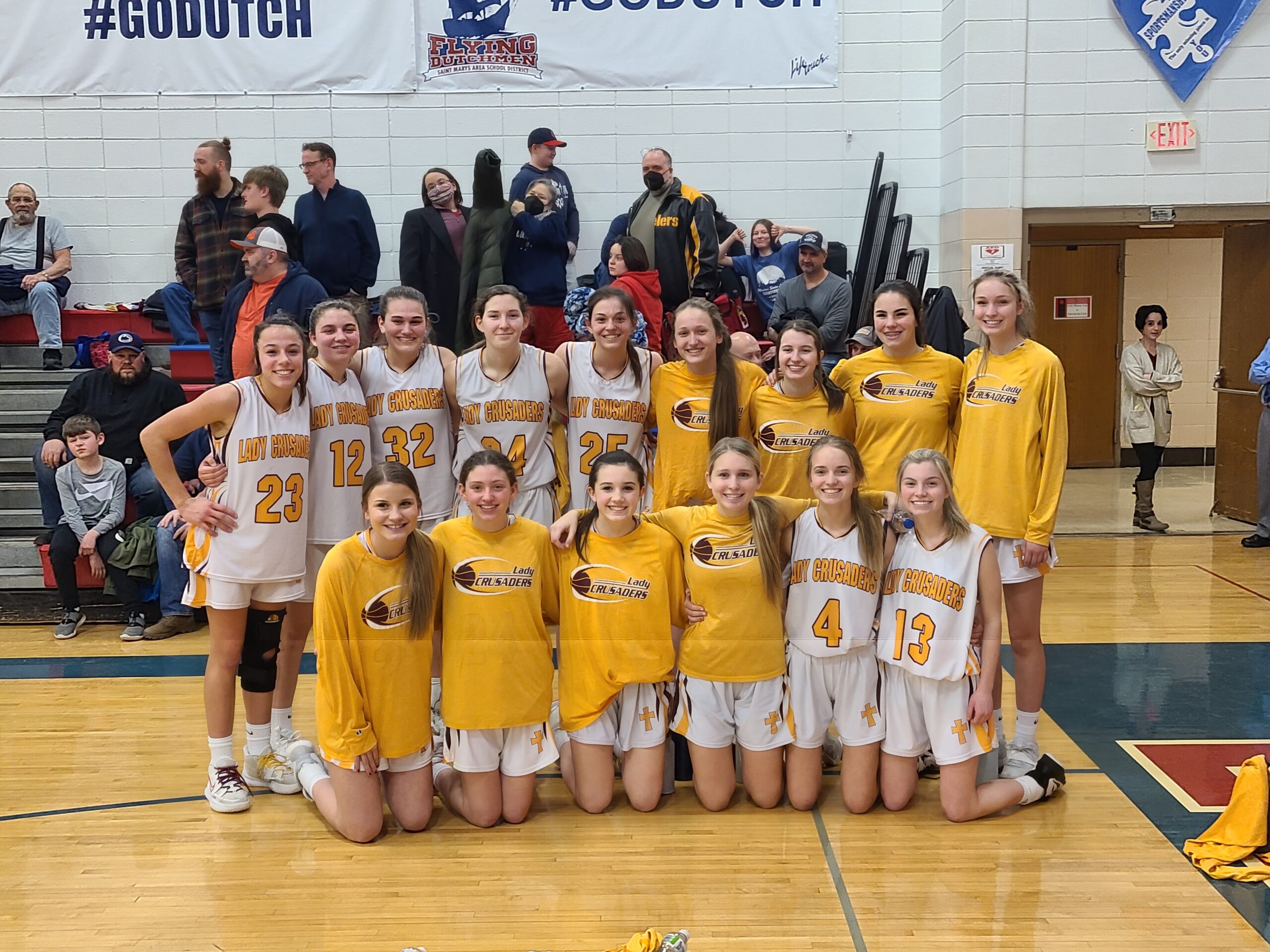 ST. MARYS, Pa. – Trailing by 15 at halftime, Elk County Catholic came storming back against DuBois Central Catholic, outscoring the Lady Cardinals 34-12 in the second half to win the AML Title game, 48-41.

“We wanted to get into some full-court pressure just to give us some life and get us moving a little bit and that’s what ended up happening,” said Elk County Catholic coach Ken Pistner. “We played much better defense in the second half. To dig yourself a 15-point deficit against a good basketball team and come out in the second half and play really well in the second half, I think it shows what these guys are made of.”

It was the second consecutive game the Lady Crusaders overcame a slow start, falling behind in their AML semifinal win against Brockway, 15-4 before rallying.

The comeback did indeed start with the defense, as the Lady Crusaders held DCC (15-8) without a bucket until the midway point of the third quarter on a Lexi Berta three, which ended a 10-0 run by ECC (21-3) to start the half.

That only temporarily stunted the Lady Crusader momentum, however.

Lucy Klawuhn scored 10 of her 17 points in the third quarter, including a three with five seconds left in the period to give ECC its first lead of the game, 36-35.

Syd Alexander came out and hit a three to start the fourth quarter and Sami Straub followed with a bucket of her own and all of a sudden ECC was up six, 41-35.

“Our goal at halftime, we said to win this basketball game we’re going to have to give up 10 points or under and we got 12, so we’ll take that,” Pistner said. “And we started to make some shots. I think it all started with our defense that got our offense going. It was one possession at a time.”

DCC cut the lead to two, 43-41 on a pair of Jesse Frank free throws, but those were the last points they would get.

Straub banked in a three and the Lady Crusaders knocked down a pair of free throws to seal the deal.

Klawuhn and Alexander led the way for ECC with 17 and 12 points, respectively, and they talked about the win afterward:

ECC overcame a slow start, as DCC jumped out of the gates with a 9-1 lead capped by a three from Berta.

The Lady Crusaders got to within one, 12-11 on a Klawuhn three early in the second quarter, but buckets from Frank, Kayley Risser, and Faith Jacob spearheaded a 17-3 run to close the half for DCC, which also included a three from Berta.

“Give DuBois Central credit, they came out and were making shots and getting stops on defense and we just couldn’t get anything going,” Pistner said. “They were quicker and more aggressive than us.”

Berta led DCC with 10 points and Frank had eight.

Elk County Catholic will enter as the top seed in the District 9 Class 1A playoffs, hosting the winner of the 8-9 game between Northern Potter and Smethport on Thursday.

DCC, meanwhile, is the four seed in Class 1A and will host fifth-seeded Ridgway on Thursday.

Redbank Valley Boys Claim First KSAC Title 1992 with Win Over North Clarion
Ridgway Boys Use Swarming Defense to Beat Elk County Catholic in AML Title Game
This website or its third-party tools process personal data.In case of sale of your personal information, you may opt out by using the link Do not sell my personal information.
×
Manage consent