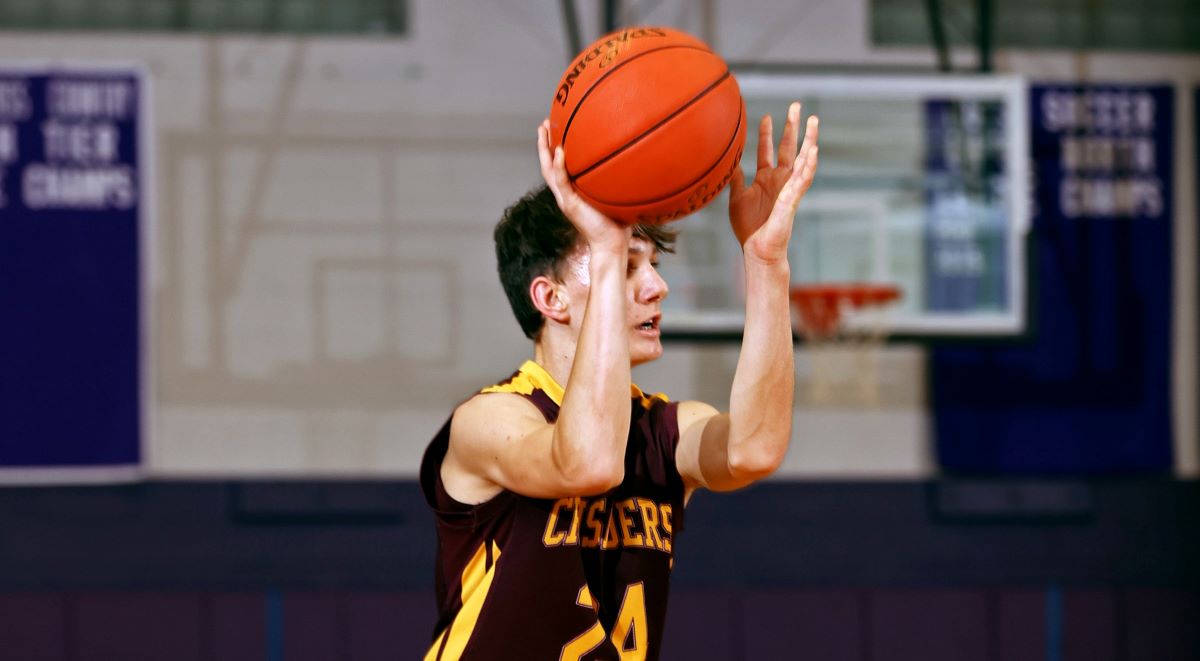 PUNXSUTAWNEY, Pa. – Despite not scoring a field goal in the last 7:14, Elk County Catholic held off Punxsutawney, 31-29, in a D9 League game in groundhog country.

Punxsutawney got back within one three more times, the latest at 30-29 on a layup by Noah Weaver with 3.7 seconds left.

In between, ECC hit 4 of 5 free throws with all five shots coming with under 50 seconds to play to get to 30 points. The last two came on two charity shots from Wil Wortman with 16.4 left.

After Weaver’s layup with just 3.7 left, the Chucks somehow got their hands on the ball twice with the potential to tie or win the game.

After Wortman hit the backend of a two-shot foul with 2.6 seconds left to put ECC up 31-29, Punxsutawney threw a baseball pass out of bounds bringing the ball all the way back towards the Cursaders’ hoop with ECC inbounding with still 2.6 left.

Beau Thomas then came up with a steal for Punxsutawney when he picked a loose ball up off the floor, but his last-second, full-court heave wasn’t close to the hoop.

ECC led 15-11 at halftime and still held the three-point lead going to the fourth quarter before a Weaver jumper 10 seconds into the quarter made it 24-23.

Colby Nussbaum led ECC with 10 points with Jordan Wasko, who had a big defensive play with 1:20 to play when he forced a held ball with the possession arrow in favor of the Crusaders and ECC up one, 26-25, added six points.

Weaver had a game-high 15 points for Punxsutawney with Cooper Hallman adding eight.

Weaver had a chance to give Punxsutawney the lead with 19 seconds left but his jumper from just inside the arc from the left elbow was off the mark.

A big reason for the lack of fourth-quarter scoring was ECC was given the opportunity by Punxsutawney to hold the basketball on two different occasions in the quarter. The second time, the Crusaders took off over two minutes before missing a layup with 1:37 left.

KANE, Pa. – Alex Merritt and Aaron Sorg combined to score 25 points to lead Ridgway to a 50-36 win at Kane.

Also for the Blue Pirates, Rowan Gorsuch and Zach Kagarise each scored 14 points.

SHEFFIELD, Pa. – Clinging to a 1-point lead with three minutes to play, back-to-back layups by Kael Hunt and Kris Bunk gave Eisenhower breathing room and the Knights earned a 52-47 win at Sheffield.

The Knights, who led by 10 at one point in the third quarter, were ahead 42-41 with 3:38 to play and averted disaster. Bunk was attempting to hit Wyatt Lookenhouse on a long pass from under the Sheffield basket, but the ball slipped and dribbled into the key. Connor Finch dove for the ball, but slid too far on the floor and was called for a travel.

On the other end of the court, Hunt drove and made an up-and-under layup to push the lead to three. Hunt then corraled a loose ball rebound from Mason Silvis’ shot. He tried to go coast-to-coast but ran into multiple defenders and lost control of the ball. The ball bounced right to Bunk who put it off the glass and in to give Eisenhower a 46-41 advantage.

Eisenhower was able to stretch the lead to seven moments later and held on for the victory.

“We played well,” Eisenhower’s Kyler Black said. “We came back and we battled. It was a good win.”

Leihden Wotorson’s 3-pointer brought the Wolverines within two at 41-39. Casey Seymour went 1-2 from the line to push the lead back to three before Finch’s layup made it 42-41.

Sheffield, which hadn’t played since winning its holiday tournament last week, was able to take the early advantage against an Eisenhower team playing on the road for the second straight night. The Wolverines jumped out to a 5-2 lead and were ahead 9-7 after the first eight minutes.

Black’s offensive rebound and put back with just over five minutes to play in the second gave Eisenhower its first lead, 15-13. Dylan Hardwick’s jumper with 3:20 to play brought the Wolverines even at 17-17.

“The momentum was huge, especially coming to play away,” Black said. “That’s what you need. You need momentum carrying into every single quarter.”

The Knights carried that momentum into the third, building a 10-point lead, 33-23, with 3:30 to play in the frame. The Wolverines slowly began chipping away and trailed by just five, 35-30, heading to the fourth.

Wotorson and Finch each finished with 14 points. Wotorson had five rebounds while Finch had six rebounds and six blocks.

Lookenhouse led four Knights in double figures with a game-high 15 points. Hunt had 12 points, while Black and Bunk had 10 points each.

Oil City, which built a 23-11 halftime lead en route to the win, also got 10 points from Sayyid Donald and eight from Jake Hornbeck.

The Lady Gators led 18-14 at halftime but used an 18-11 third quarter to take control of the game.

Jace Alfieri chipped in nine points in the win.

FOXBURG, Pa. – Alex Leadbetter had 16 points to help Clarion-Limestone to a 50-21 win at A-C Valley.

Chloe Fritch added 13 points for the Lady Gremlins who also got eight points from Emma Daile and seven from Naomi Yenesky.

FRILLS CORNERS, Pa. – North Clarion built a 15-point lead going to the fourth quarter on its way to a 42-31 win over visiting Keystone.

Lauren Lutz had a big game for the She-Wolves as well with nine points, 13 rebounds, and four blocked shots, while Lily Homan added nine points and seven steals.

Maddie Hopsicker and Mackenzie Coffman each added 15 points for the Hornets.