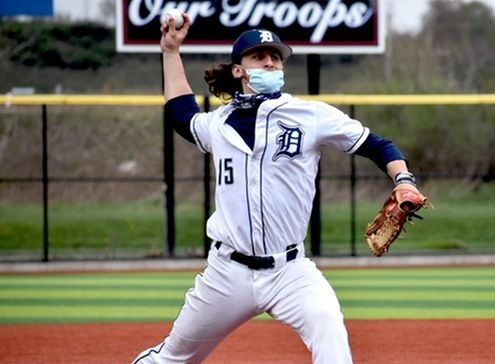 The Lions won the deciding game, 10-5 over the top-seeded University of Cincinnati Clermont.

In the deciding game, Clearfield alum Brandon Orsich got the ball, with the battery with former Punxsy standout Joseph Dipietro.

DuBois scored five runs over the final three innings, including another bomb from Stauffer, who finished 2-for-4 with two RBIs. Thayne Morgan (Clearfield) went 1-for-1 with two RBIs, and Brett Beith (Lakeview) was 1-for-2 with a run scored.

Orsich went 6 ⅔ innings to get the win, allowing five runs (four earned) on eight hits and five strikeouts. Stauffer once again came in for the save, tossing two scoreless innings with a strikeout.

Orsich also earned a spot on the all-tournament team.

Slippery Rock High School Grad Mineo Earns All-PSAC West Honors for SRU
Mercyhurst Prep Grad White Named PSAC Women’s Golf Athlete of the Year for Gannon
We use cookies on our website to give you the most relevant experience by remembering your preferences and repeat visits. By clicking “Accept All”, you consent to the use of ALL the cookies. However, you may visit "Cookie Settings" to provide a controlled consent.
Cookie SettingsAccept All
Manage consent