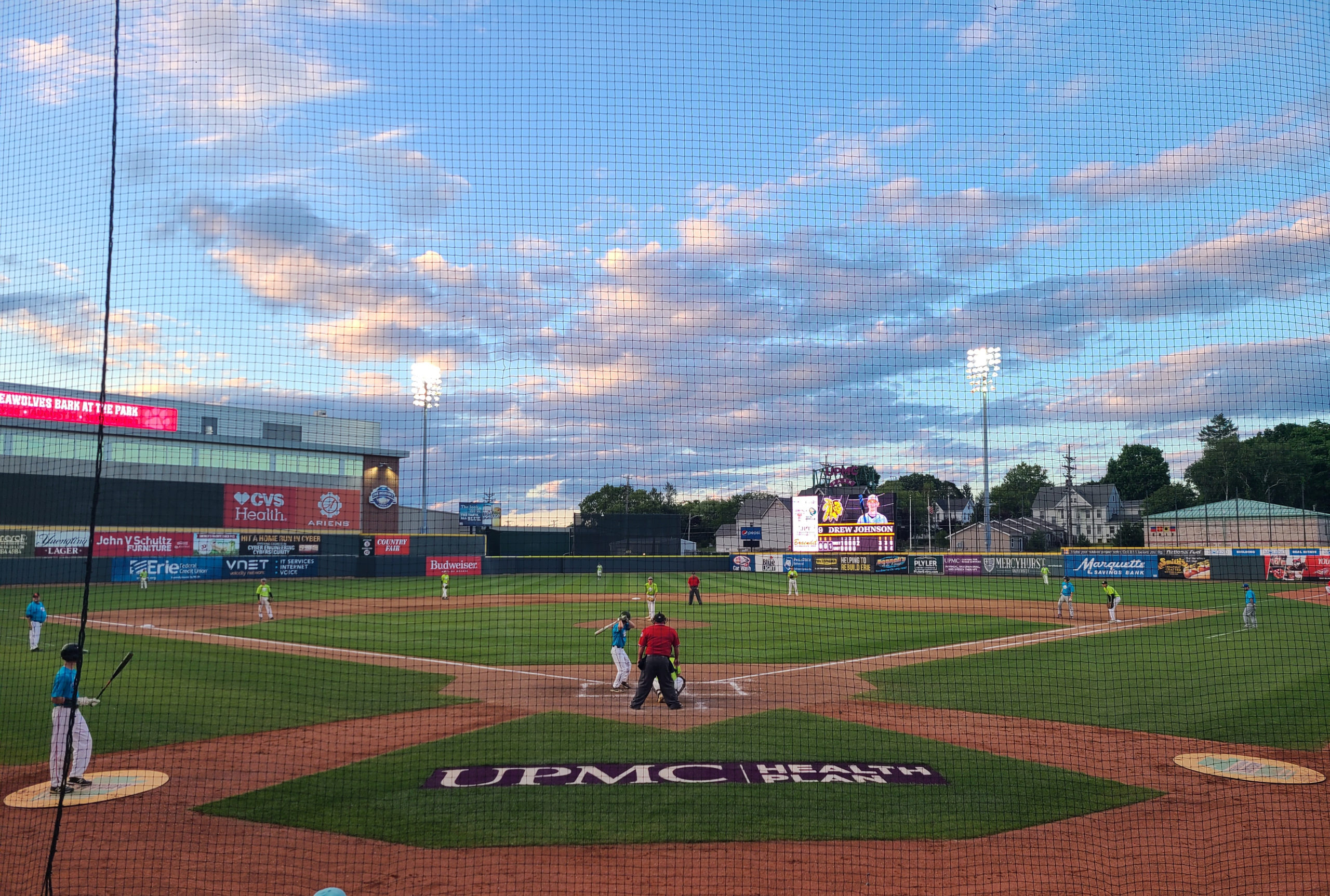 Instead, the two teams played for 10 innings, battling to a 3-3 tie at UPMC Park.

“This was so much fun,” said Harbor Creek’s Austin Vaughn of the East squad, who shined both on the mound and at the plate. “It was a great way to go out. It was amazing.”

The East didn’t get its first hit of the game until the eighth inning, an RBI infield single off the bat of Conor Fitzgerald (Mercyhurst Prep) to make it 3-2.

They tied the game in the ninth on Luke Manendo’s (Mercyhurst Prep) RBI single before Jarrod Glasl (Northwestern) was able to get out of the inning to force extras.

In the 10th, Austin Vaughn (Harbor Creek) struck out the side, part of two scoreless innings he pitched for the East, which was managed by Harbor Creek’s Tim McQueeny, who just completed his final season as manager.

“This is a great game for a great cause,” McQueeney said (Proceeds from the game go to the Children’s Miracle Network). “It would have been nice to get a run in the bottom of the ninth or bottom of the tenth, but it was two good teams. Didn’t play great defense on either side necessarily, but people swung the bats and the pitching was good. It was a good high school baseball game, and fun.”

The East loaded the bases against Glasl in the bottom of the 10th, but a squeeze attempt by Michael Carlo (North East) led to Fitzgerald being thrown out at the plate with one out, followed by an intentional walk to Manendo. That re-loaded the bases, but Glasl got a strikeout to end the game at 3-3.

Early on, it was a pair of errors in the first inning that allowed McDowell’s Chris Juchno of the West squad, managed by Girard’s John Tramontano, to cross the plate with the first run of the game.

That lead extended to 3-0 after Clayton Boutte’s (General McLane) 2-run single in the fifth that plated Juchno and Sam Crowley (McDowell).

A hit batsman and a walk helped lead to the East getting on the board in the fifth, as Vaughn drove in Corry’s Lucas Dyne with a sacrifice fly to make it 3-1.

That was about it as far as the offenses were concerned, as pitching ruled the day.

Morehouse gave up the run in the fifth and Cathedral Prep’s Ryan Tomczak the run in the eighth, although there was some bad luck involved with that, as there were consecutive errors to start the inning. Tomczak struck out a pair.

For the East pitching staff, meanwhile, Harbor Creek’s Aidan Kelly gave up an unearned run in the first and struck out five in his two innings of work. East pitchers struck out 19 batters in the 10-inning affair. Huskies tossed the first five innings as Cam Miller worked the third and Cody Smith the fourth and fifth.

“Just to coach here with all these great kids, a great ballpark, you can’t beat it, and it will be a great memory,” McQueeney said. “I enjoyed every single minute of it and then some. It was a great chance for a bunch of great kids to play a great game.”

Todd Essman of Girard delivers a pitch for the West team in the second inning.

Fitzgerald and Vaughn worked the final four innings (two each), with both striking out four.

Vaughn also reached base twice via an error and an intentional walk in the ninth.

NOTES: Mercyhurst Prep’s Alex Stefanovski, who was injured and unable to play, got the ceremonial start at first base … There was a brief tribute before the game to former Harbor Creek coach Paul Foust, who passed away in February of 2020 (there was no game last season) … the four District 10 umpires who worked the PIAA Class 5A championship game were also honored during the game -Brian Fuller, Frank Luna, Greg Roberts and John Frey.

Four District 9 Umpires Officiate PIAA 2A Baseball Championship Game
Marciniak Named D9and10Sports.com D9 Baseball Player of the Year; Whiteman, Smail, Porter Honored; All-D9 Named
We use cookies on our website to give you the most relevant experience by remembering your preferences and repeat visits. By clicking “Accept All”, you consent to the use of ALL the cookies. However, you may visit "Cookie Settings" to provide a controlled consent.
Cookie SettingsAccept All
Manage consent