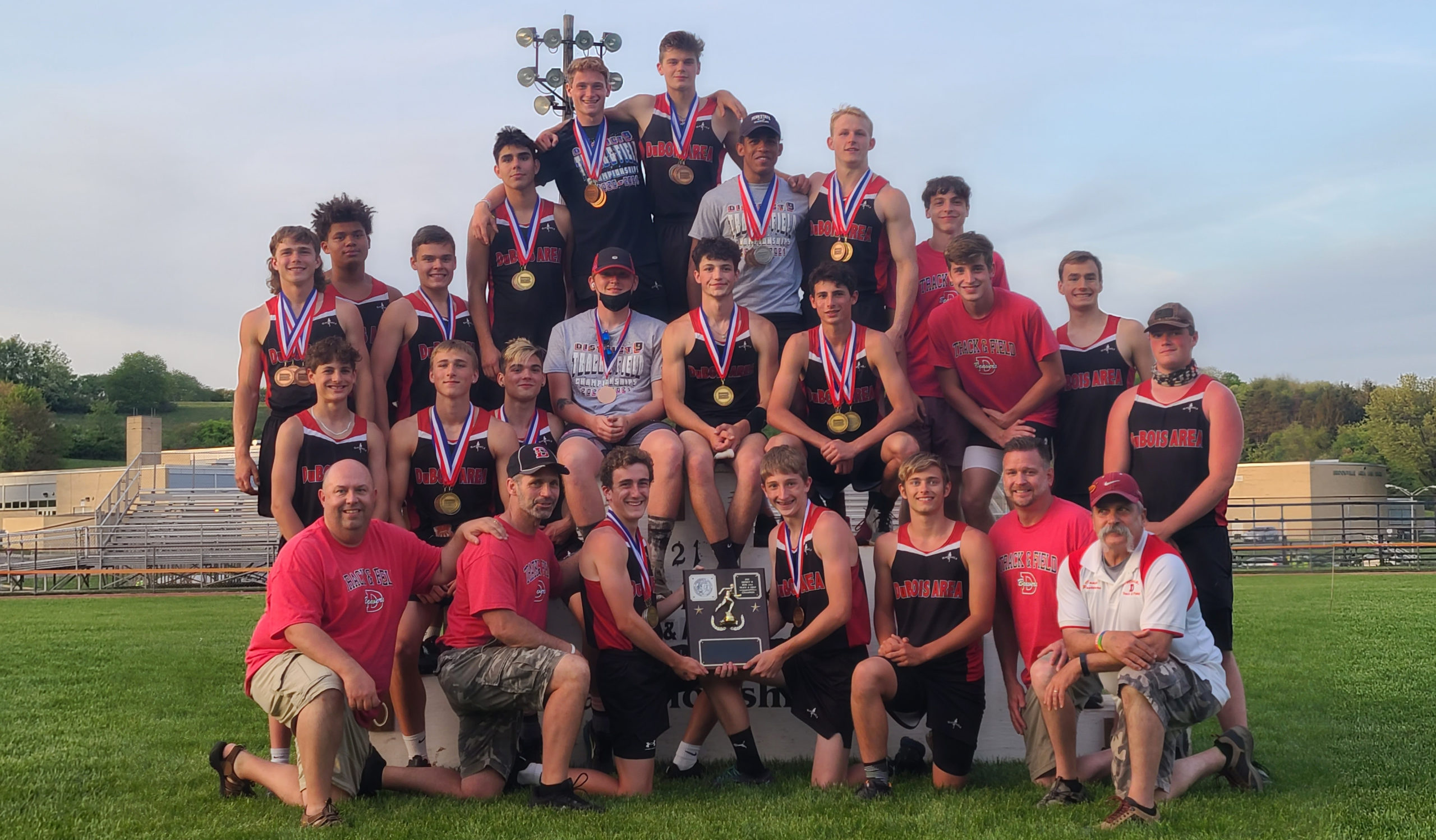 The DuBois boys captured the D9 Class 3A team title.

BROOKVILLE, Pa. – Wednesday’s District 9 Class 3A Track and Field championships were so fiercely contested that it took officials several minutes to determine the girls’ champion.

It turned out that Bradford staked that claim, joining the DuBois’ boys as team champions.

The Bradford girls with their Class 3A team trophy

The jumping events on the boys’ side belonged to Bradford senior Gavin McGee. All he did was shatter a 25-year old record in the triple jump with a leap of 46-4, breaking a mark held by another Owl, Brain Schimp of 46-3 ¾.

McGee also edged Andrew Shaffer-Doan of DuBois to win the high jump at 5-11 and with a leap of 21-6 in the long jump beat Clearfield’s Ian Billotte by six inches for first.

He talked about his day afterward:

Just a freshman, Roemer had a fantastic day, which began with a narrow second-place finish to St. Marys senior Sammie Hayes by .4 seconds in the 1600. She went on to best Hayes in the 800 by just over two seconds and dominate the 3200 (12:00.92) winning by nearly 33 seconds.

Nuzzo, meanwhile, was outstanding in the field.

It was also a big day in the field for St. Marys junior Payton Bauer. She went 36-1 in the shot put to beat second-place finisher Allyson Luke of Bradford (34-7 ¾) and had a toss of 94-11 in the discus to win by almost 10 feet.

She talked about her pair of golds afterward:

St. Marys Maura Caskey had a strong day as well, winning the 300 hurdles in 49.04, finishing second in the long jump, and teaming with Vivianne Catalone, Brianna Grotzinger, and Hayes to win the 4×800 relay.

The other multiple event individual gold medalist on the boys’ side was Clearfield’s Zane Inguagiato. He beat Liners for gold in the shot with a throw of 44-5 ½ and won the discus by over 13 feet with a toss of 123-4.

It was a whole lot of balance after that, with DuBois Erich Benjamin edging teammate Jaedon Yarus in the 100, Yarus coming back to win the 200, and Clearfield’s Logan Firanski the 400.

The 4×100 relay was a thrilling race, with the Bradford team of Jake Pattison, Gabe Mitchell, Andrew Kane, and Jerid Wilmouth beating DuBois by .02 seconds.

In an event previously dominated by his father and grandfather, DuBois’ Zach Shilala cleared a PR of 13-3 to win the pole vault by a foot.

He talked about what it meant to him afterward:

Clearfield’s Jason Plubell, Ian Billotte, Kline, and Firanski easily won the 4×400, as did the DuBois team of AC Deemer, Foradora, McKellen Jaramillo and Ryan White in the 4×800.

Next up are the PIAA championships next Saturday at Shippensburg University.

May 19, 2021 D9 Softball: Hipps Perfect in Clearfield Win; Clarion Tops Moniteau Giving Keystone Top Seed; ECC Beats O-E
May 20, 2021 D9/D10 Baseball/Softball Scores Powered by the BHL Sportsperson of the Year Award
We use cookies on our website to give you the most relevant experience by remembering your preferences and repeat visits. By clicking “Accept All”, you consent to the use of ALL the cookies. However, you may visit "Cookie Settings" to provide a controlled consent.
Cookie SettingsAccept All
Manage consent