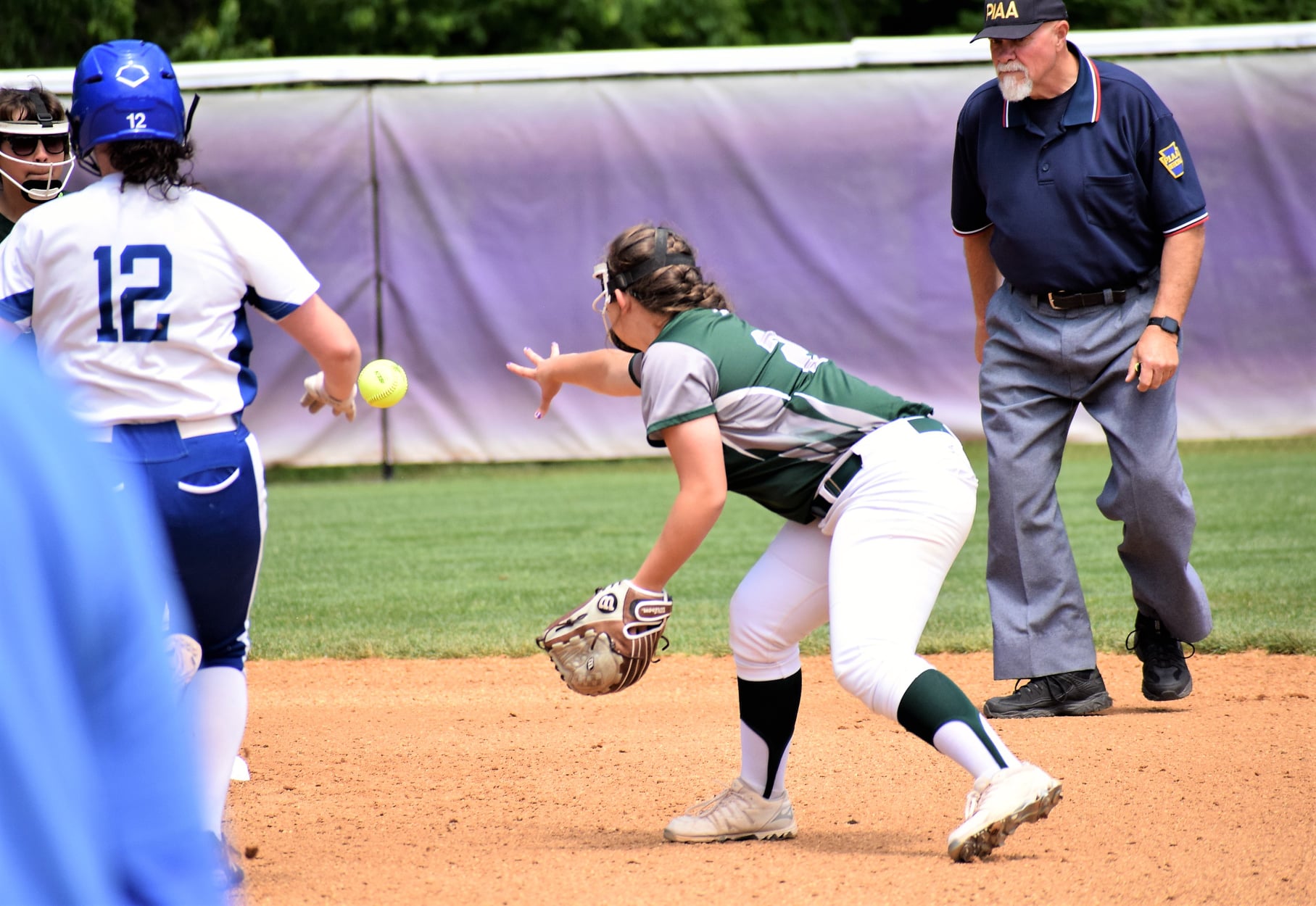 SLIPPERY ROCK, Pa. – It wasn’t a perfect ending, but it certainly was a dream season for the Union City softball team.

The Lady Bears ran into a hot pitcher in Ligonier Valley’s Maddie Griffin, who led her Rams to a 6-1 win in the PIAA Class 2A semifinals on Monday at Slippery Rock University.

Griffin, who has nine no-hitters and a pair of perfect games to her credit this season, didn’t allow a baserunner until Syd Gilbert drew a walk in the fifth. She didn’t give up a hit until Emylee Zielinski’s 1-out single in the sixth.

The Bears did break up the shutout in the seventh, courtesy of Gilbert, who took Griffin deep.

“She certainly is a talent,” said Union City coach Jerry VanZandt. “She had us guessing the entire game. And then when she did get ahead she could throw that rise ball that was really tough to hit.”

Conversely, the Rams were able to get to Union City ace Abby Tingley for three runs in the third. Kalley Johnston came with the big blow, scoring Eden Krouse and Griffin, who reached on a bloop double and an error, respectively. Jordan Hofecker put the finishing touches on the inning with an RBI single that brought in Johnston.

That proved to be more than enough for Griffin.

The Rams’ ace struck out 12 in the game, setting down the first 12 batters she faced in order, six via strikeout.

Gilbert drew the walk in the fifth to lead off the inning and went to second on Cyaira Zielinski’s sacrifice bunt, but Griffin was able to get a pair of strikeouts to get out of the inning.

Trailing 5-1 in the bottom of the sixth, pinch-hitter Michayla Magee drew a one-out walk, and Emylee Zielinski singled to shallow left for that elusive first hit. With two on and one out, Griffin again wiggled her way out of trouble, getting a pop-out and a strikeout to end the threat.

Not only did Gilbert’s home run in the seventh break up the shutout, but it also gave the large contingent of Union City fans, who have been following the team’s historic journey throughout the season, a big reason to cheer.

“As you can see, our community was excited, and that’s a credit to our girls,” VanZandt said. “We played 22 softball games, came down here and beat a really good Laurel team (in the quarterfinals), giving this town something to be excited about. Everyone should be proud of themselves.

“And even when you get to the end of the game, we’re in big trouble and senior Syd Gilbert comes up and hits a home run. She’s still battling, still fighting and that’s the character of this team.”

In the sixth, the Rams had three straight hits. Krouse had an RBI bunt groundout, while Haley Boyd connected on an RBI single. Ruby Wallace added an RBI double in the seventh.

Ligonier Valley moves on to play District 4 champion Line Mountain, a 1-0 winner over Williams Valley in the other semifinal, for the state championship on Thursday.

The finish to the season wasn’t what they wanted, but the journey to get to this point is one they’ll never forget, becoming the first Union City softball team to reach the PIAA semifinals.

“Today, I realize we came up short, and, as much as I tried to take their heartache away, I tried really hard to make them understand that they really accomplished a lot this year,” VanZandt said. “We really do have a lot to be proud of for our little town. It just energized the town, and the town deserves it because they always show up for the kids. If you go near a Union City softball field, it’s always full because they always show up for the kids.”

In Battle of Softball Powerhouses, DCC Falls to West Greene in Class 1A Semifinal Powered by North Washington Rodeo
What a Ride: The 2020-21 Sports Season Took us All on a Ride for the Ages
This website or its third-party tools process personal data.In case of sale of your personal information, you may opt out by using the link Do not sell my personal information.
×
Manage consent