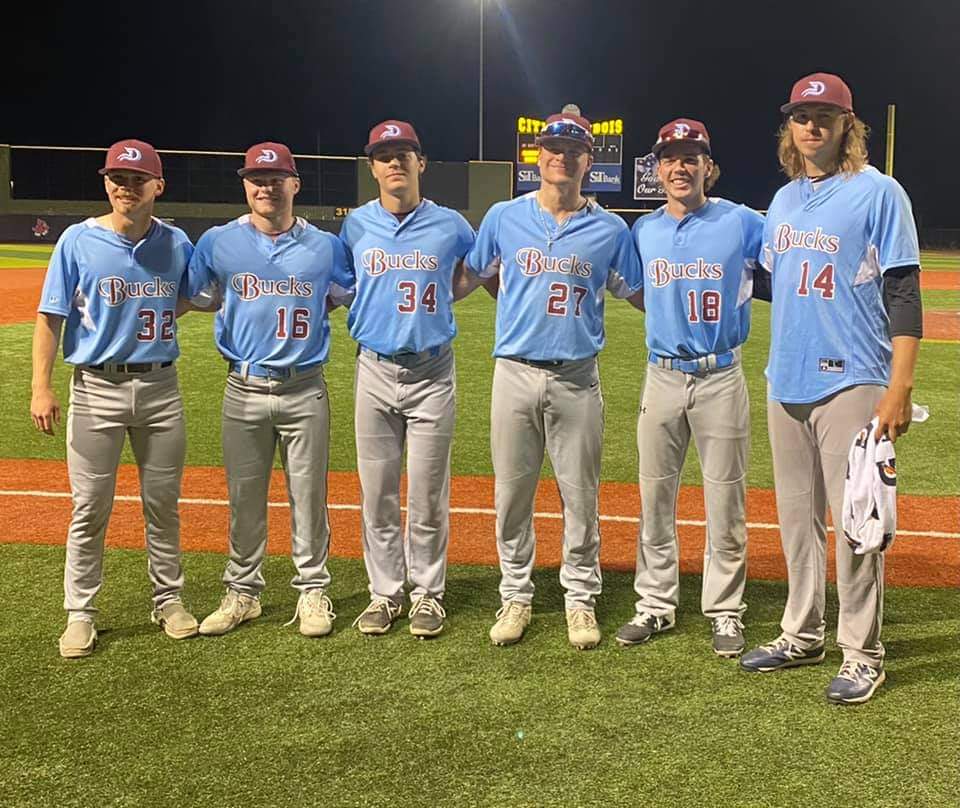 Blair helped lead Penn State DuBois to its third consecutive United States Collegiate Athletic Association national championship as a pitcher. Baldensperger and Loomis, meanwhile, were part of a National Junior College Athletic Association national runner-up team at Niagara County Community College, the third time in history the program has accomplished the feat. Knapp just wrapped up another successful season at Thiel, while Grosch is at Mercyhurst University after completing his freshman season, where he will be joined by Morrison, who is transferring from Canisius. Another Warren alum, Ryan Rafalski, also is at Mercyhurst and is pitching for the Jamestown Tarp Skunks this season.

And they’ve all thoroughly enjoyed bringing the band back together.

“It’s so much fun to play with all the guys again,” Morrison, a catcher, said. “It’s nice to have instant chemistry and bring back old memories from playing back in grade school.”

“It’s great getting to play with all of my old teammates and I feel like we are all still comfortable playing together and play well together,” Grosch, an infielder, noted.

Loomis (a catcher) and Baldensperger continued on as teammates with NCCC and were thrilled to be reunited with their high school teammates.

“It’s been a great time playing together again after high school other than playing with Lance in college,” Loomis said. “I don’t get to see many of the other guys as much, so it’s fun to play with them now and seeing how much all of us have improved.”

Blair compiled a 4.18 ERA this season for the Lions and equally enjoyed the time spent with former Warren teammates turned Bucks teammates.

“It’s been pretty cool to get to play with this group again because we have been playing together since travel ball and Little League,” Blair noted.

And as they’ve gone on to college they’ve continued to absorb information and increase their knowledge of the game and what it’s like to play at the next level.

They’ve been able to bounce a lot of information off of each other as well which has proved to be very beneficial.

“Talking with other guys you get an idea of how the different programs are run,” Blair said. “Also Aidan is a smart catcher who knows the game well so I’ve learned more about what pitches to throw in different situations.”

Morrison agrees, and also has enjoyed seeing how everyone has grown as a player as they’ve transitioned to the college game.

“I think one of the biggest things has been being able to bounce different tips off one another that we’ve learned from our own coaches,” Morrison said. “It’s pretty cool to see where guys have grown that I haven’t played with in a few years.”

Their respective coaches have a lot of combined baseball experiences and as Morrison said it’s been a positive process to be able to bounce things off of one another.

Loomis feels like it’s helped him become a better player learning different things from his teammates and what they’ve brought with them.

“I’ve learned a lot from the other guys just hearing about how their coaches teach different drills for mechanics and just doing new things that they have learned in school to help me get better,” noted Loomis.

Added Grosch: “We’ve all been able to talk about little things we learned at school that can help us succeed in this game.”

The group made a lot of memories together playing growing up and the beauty about this summer is that they were able to create new ones.

For all of them, just being together again and playing the game they love has been something they will cherish.

“I think the best part about this summer is how much fun all of us are having playing together again and winning a bunch of ball games,” Loomis said.

For Morrison, who is coming off a major shoulder injury, just playing the game he loves again has reinvigorated him.

“The best part of this summer for me has just been having fun on the field again,” Morrison said. “Sometimes college ball ends up feeling like a job and it comes with a lot of work and stress, It’s nice to kick back and play loose with some talented guys.”

“The best part of the summer has been getting to play again with the guys from Warren as well as getting to meet and build relationships with guys from around the area while playing competitive baseball,” Blair said.

Noted Baldensperger: “The best part of this summer has been playing with these guys again and guys I’ve played travel ball with and guys I played against in high school.”

For Grosch, he has enjoyed being back with the guys as well and he also points to a memorable moment from Baldensperger.

“The best part of the summer was Baldy’s walk-off or just the fact that I get to play with all of my old teammates again,” Grosch said.

And as their memorable summer with the Bucks has reached it’s conclusion, they all have big goals moving forward.

“My biggest goals moving forward are continuing to better myself every day and to find ways to help my team win this season,” Grosch said.

For Blair, he aims to help continue the dominance that Penn State DuBois has had in recent seasons.

“Personally I just want to continue to get better and help my team compete for another national championship,” Blair said.

For Loomis and Baldensperger, they hope to continue the success with NCCC with the goal of ultimately going to a 4-year school.

“My biggest goal for the future is to definitely learn as much as I can over these next couple of years and move on to a four-year school and to continue having fun playing baseball,” Loomis said.

“My biggest goal is to keep getting better and get back to the World Series at NCCC,” Baldensperger said. “This will be my last year at Niagara and I hope I’m able to transfer to a school that has what I’m looking for and keep playing baseball.”

Morrison is looking forward to a fresh start at Mercyhurst.

“My biggest goal personally is just to stay healthy and go help Mercyhurst win,” Morrison said. “A combination of things didn’t bounce my way at Canisius so hopefully a fresh start gets me rolling and I can help Mercyhurst get some wins and have fun playing with a lot of guys I’ve either played with or against for years.”