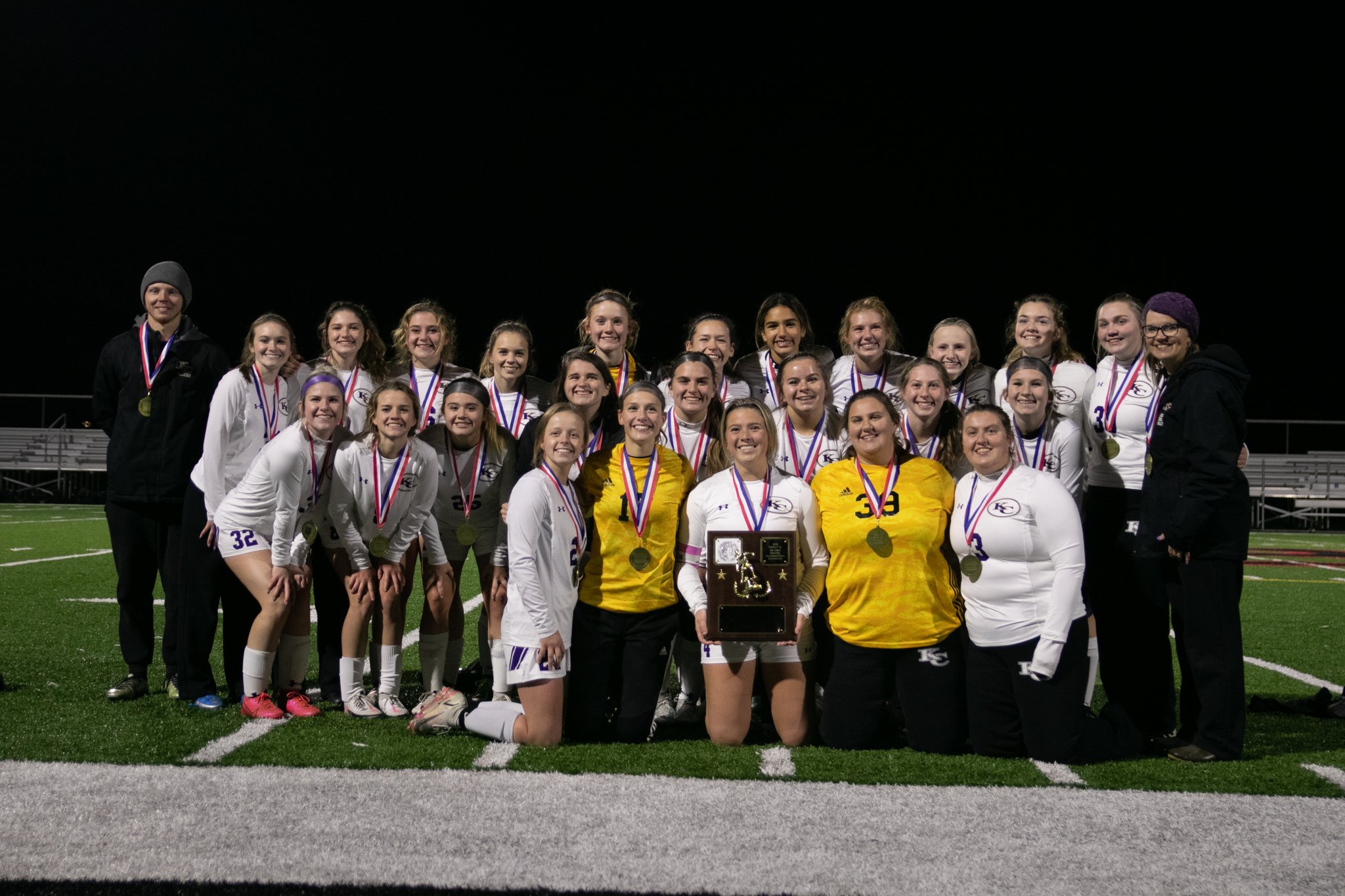 BROCKWAY, Pa. – With 1:46 remaining in the first overtime, the District 9 Class 2A girls soccer championship rested solely on the foot of Karns City freshman Sarah Dodd.

After a foul in the box created the second penalty kick opportunity of the overtime period, Dodd calmly stepped up and hit a perfectly placed ball past a diving Allison Shipley to send the Lady Gremlins to a 3-2 win in an instant classic.

The first penalty kick of the overtime came minutes earlier. It was McKenna Martin, who scored two goals in the game, taking that kick for KC, but Shipley denied the shot to keep the game going.

The defenses proved to be terrific against two dynamic offenses, as Shipley and Karns City keeper Rossi McMillen both made a number of crucial saves.

“I just hoped for the best, dove at anything I could, got to every ball I could and just prayed my hands were going to stop the ball and my defense had my back,” McMillen said.

For Clearfield, it was the only loss in another terrific season. For the Lady Gremlins, it marked a reversal of fortune after the Lady Bison beat them 5-4 in the title game a year ago.

“I told the girls, come in with a chip on your shoulder because you should be upset … we were close last year but we need to bring it back this year,” said Karns City coach Tracy Dailey.

Deep into the second half the game was deadlocked 1-1. That was until Martin got behind the defense and put the ball into the back of the net with 7:18 to play.

With the game being played as tightly as it was, it looked as if that may be the difference, but in a game of penalty shots, Clearfield’s Elle Smith had an opportunity after a foul by the Lady Gremlins in the box.

Smith took full advantage of her opportunity, placing a perfectly placed shot past a diving McMillen to tie the game at 1-1.

“I knew it was going to be a battle,” Dailey said. “Clearfield is a very good team, they have some very good players. We came in with a game plan and executed it to the best of our ability, but as you saw, Elle (Smith) still got through and (Emma) Hipps still got through, but taking nothing away from our Karns City girls. They’ve worked extremely hard all season and we are so excited to bring the District 9 championship back to Karns City.”

Between Smith, Hipps, Martin, Emma Dailey and others, there was a lot of offensive firepower on the field.

It was Hipps who got the scoring going, scoring off a corner kick from Riley Ryen a little over 12 minutes in to give Clearfield the early lead.

Both teams were able to generate scoring chances throughout the first 40 minutes, but it looked as if that goal may stand as the only one of the half.

Martin had other ideas, however, finding the back of the net with 3:43 to go before halftime to knot it at 1-1.

Between that goal and Martin’s second of the game, there was a whole lot of stellar defense going on.

Leading that charge were the likes of Abby Ryan, Cara Turner, Emily McCracken, Megan Hamm and Lydia Brown for Clearfield, as well as Karns City’s Abby Callihan, Dodd, Taylor Miller and others.

And of course, McMillen and Shipley as well.

“Oh my gosh, Rossi McMillen had the best game tonight,” Dailey said. “She actually struggled a little bit the last few games this season, she got into some bad habits. We worked Rossi one-on-one with my head assistant coach, Tyler (Pollock). He took her every practice for the last week and we just worked and worked and she was phenomenal tonight. She saved our butts. Amazing, point-blank saves, diving saves. She is a worker and I can’t speak highly enough of her.”

With the win, Karns City advances to play the WPIAL runner-up (either Avonworth or North Catholic) in the first round of the PIAA playoffs on Tuesday.

Karns City Boys Blank St. Marys to Repeat as D9 Class 2A Soccer Champions
Keystone Captures First District 9 Volleyball Title Since 1992 with 2A Crown
We use cookies on our website to give you the most relevant experience by remembering your preferences and repeat visits. By clicking “Accept All”, you consent to the use of ALL the cookies. However, you may visit "Cookie Settings" to provide a controlled consent.
Cookie SettingsAccept All
Manage consent