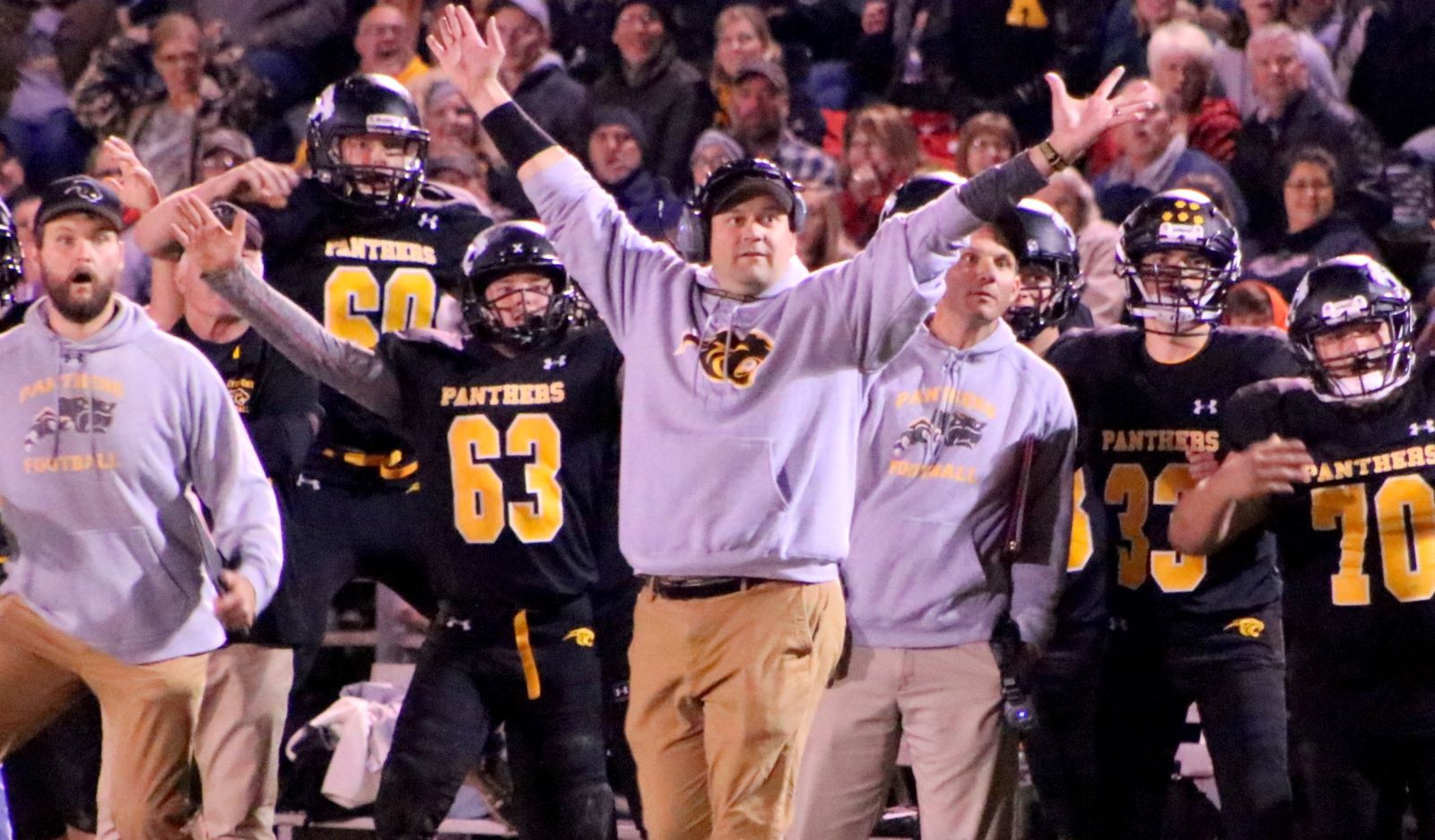 Ryan Smith has stepped down as Keystone's football coach. Photo by Shelly Atzeni. Check out more of Atzeni's work here

Sometimes items come across my desk that don’t warrant a full story but are also newsworthy.

They aren’t breaking news pieces or even all that timely of pieces but are still things I think you might be interested in.

So heading forward, I am going to try to do a short newsy piece like this every now and then to keep you updated on the happenings.

A pair of successful District 9 football coaches have stepped down since the end of the season.

At Keystone, Ryan Smith has turned in his letter of resignation after four years at the helm of the Panthers that included a couple of conference/divisional titles and four postseason appearances, including the D9 League Small School South title this season.

Smith, an already highly regarded basketball official, appears to be thinking about giving football officiating a try. So, while losing a younger coach like him from the coaching ranks isn’t ideal, if he does choose to officiate that would be a welcome addition to an aging officiating rank.

Jack helped the Hubbers to the D9 1A semifinals this year after going to the championship game in 2020 and has restored some glory to the proud tradition of Smethport football.

FIFTH PIAA SPOT IN CLASS 1A TO BE PLAYED FOR

The return of a full 32-team PIAA playoff bracket in each classification this season as opposed to last year’s champions-only tournament means that District 9 will be receiving five bids in Class 1A boys’ and girls’ basketball for the first time.

After a little bit of discussion, the District 9 basketball committee with the blessing of the D9 committee has elected to play for all five spots which means a consolation tournament among the teams who lose in the quarterfinals for the fifth, and final, PIAA berth.

According to basketball chairman Randy Reitz, the quarterfinal losers will playoff for that final spot in what could be up to a four-team “fifth-place consolation” bracket.

Say it is an eight-team tournament and the top four seeds all win the quarterfinal games. Those four teams would all qualify for the PIAA playoffs in some order of the first through fourth-place teams out of District 9. Then the fifth seed would be determined by a consolation playoff among the four losers with the fifth seed in this case playing the eighth seed and the sixth seed playing the seventh seed. The winner of those games would then square off for the fifth-place berth. If there are fewer than four losing teams left after the quarterfinals then a team (or multiple teams) would get byes into the fifth-place game.

As for the Class 3A boys’ PIAA tournament, a subregion consisting of Districts 5, 8, and 9, will send two teams to the PIAA Tournament. How those teams will be determined will be decided when the basketball chairpersons of each district get together at the end of the month.

The other qualifiers by classification awarded to District 9 are as follows: Class 2A girls get two, Class 3A girls get one, Class 2A boys get three, and Class 4A boys play a subregional with District 8 to determine one participant.

According to a memo on the District 9 committee website, the Class 2A wrestling championships are returning to Tippin Gym this year and will be held Saturday, Feb. 26, at the new facility (currently Clarion University is requiring masks for all spectators regardless of vaccination status).

The Class 3A championship will still be at Clearfield High School also on Feb. Feb. 26.

The team duals championships are being held Saturday, Feb. 5, at DuBois High School.

KSAC TO HAVE A FOUR-TEAM PLAYOFF

The KSAC has joined the AML in having a four-team basketball playoff to determine its league champion.

According to a story in the Pittsburgh Tribune-Review, Stebbins said, “his hand was forced.”

Jan. 24, 2022 D9 Girls’ Hoops: Alexander Leads ECC Past Kane; CVille, Keystone, NC, Redbank Get Wins
Cameron County’s Brown Explodes for 60; May Have Set D9 Boys Record in Win at Galeton
This website or its third-party tools process personal data.In case of sale of your personal information, you may opt out by using the link Do not sell my personal information.
×
Manage consent