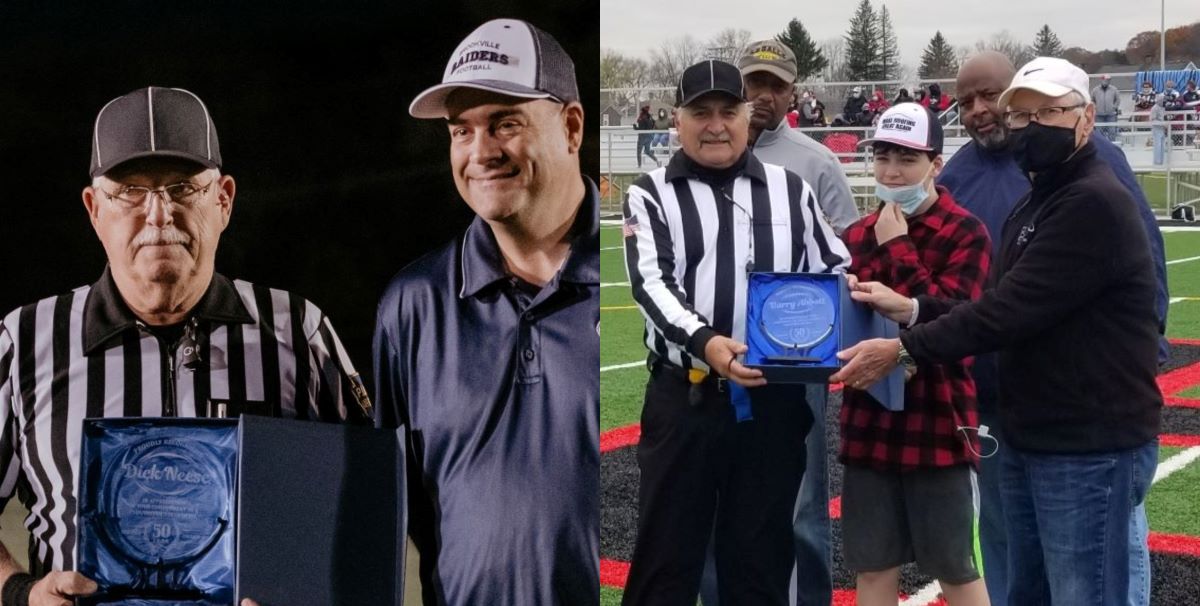 BROCKWAY, Pa. – During the District 9 football playoffs this past weekend, District 9 honored a pair of officials who have been arbitrating games for at least 50 years.

On Friday, Oct. 23, prior to the Ridgway at Brookville District 9 Class 2A semifinal game,  Dick Neese of Punxsutawney was honored for 50 years of service. Brookville athletic director Dave Osborn, a member of the District 9 Committee, presented Neese, who was officiating the final football game of his career, a plaque from the District.

Dick Neese of Punxsutawney (left) is presented with a 50-year officiating service award by Brookville AD Dave Osborne prior to Friday night’s District 9 Class 2A semifinal game between Brookville and Ridgway in Brookville. It was Neese’s final game officiating varsity football. Photo by Melissa Thrush

Then, on Saturday, Oct. 24, at halftime of the Clearfield vs. St. Marys District 9 Class 3A championship game, Barry Abbott of DuBois was honored with a 50-year service award. District 9 football chair Bob Tonkin, a former member of the District 9 committee and the current Secretary/Treasurer of the District, presented Abbott with the award.

Barry Abbott of DuBois (left in stripes) is presented with a 50-year officiating service award by District 9 football chairman Bob Tonkin at halftime of the D9 3A title game between Clearfield and St. Marys. Abbott was joined by his family and extended family. Photo by Chris Rossetti

Johnsonburg Out of D9 VB Playoffs Because of COVID-19; Issues at Ridgway Could Impact Brookville Football
Oct. 27, 2020 Playoff/Regular Season Soccer Scores
This website or its third-party tools process personal data.In case of sale of your personal information, you may opt out by using the link Do not sell my personal information.
×
Manage consent