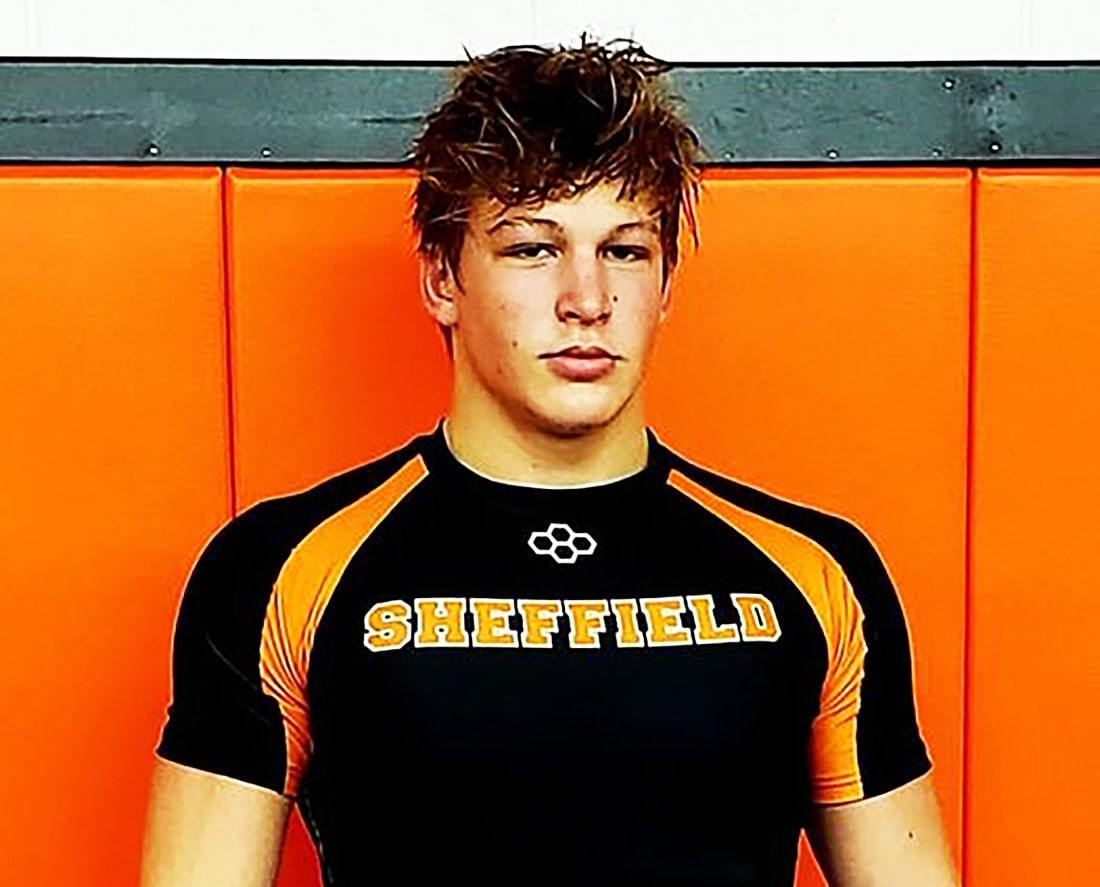 With the start of every new wrestling season, one of the more interesting exercises is trying to project who could make an impact at the district level and possibly beyond. Using the PA Power Wrestling state and regional (9 and 10) preseason rankings as a guide, here is a look at who to keep an eye out for in 2021, remembering that there is a certain degree of imprecision as some wrestlers will be changing weight classes, may opt out of the coming season, or not compete due to injury.

Redbank Valley’s Cole Bish enters the season ranked seventh in the state and third in the NW Region. The Bulldog sophomore put together a 28-7 record in this weight class a year ago. Freshman Jared Popson of Brookville, seventh in the NW Region, is 0-1 on the season, dropping a 10-6 December decision to Reynolds’s Logan Hammerschmidt, currently ranked 22nd in Pennsylvania.

Cayden Walter (81-28 career), a Brookville senior, compiled a 33-8 record in 2019-2020, winning districts and regionals on his way to a sixth place finish at state tournament in the 106 pound class. Ranked fourth in Pennsylvania and first in the NW Region, he opened his last season wearing a Raiders’ singlet with a 1-0 win against Reynolds’s Chase Bell in December. Redbank Valley junior Ridge Cook (50-23 career) is fifth in the NW Region after posting a 28-11 mark a year ago and qualifying for regionals at this weight. Wyatt Shaffer of Johnsonburg was 29-11 last season as a freshman, qualifying for regionals at 106 pounds after finishing second at the district tournament. Shaffer begins the season ranked sixth in the NW Region and is followed by Brockway freshman Weston Pisarchick at seventh.

Two grapplers are ranked regionally, Curwensville’s Jake Carfley is second and Johnsonburg’s Collin Porter fifth. Carfley (41-23 career), a junior, was 27-12 last season and qualified for regionals as a 106-pounder. Porter, also a junior, went 18-14 a year ago at 120 pounds, his first varsity season.

Owen Reinsel (71-13 career) of Brookville is ranked fourth in the state and first in the NW Region. The two-time district champion was 37-7 in 2019-2020 and stood on the fourth step of the 113 pound podium in Hershey. Reinsel took a 10-0 major decision in December against Liam Foore of Reynolds, currently ranked 17th in Pennsylvania. Kane junior Alex Bechakas (44-18 career) finds himself 22nd in the state and third in the region to start the season. Last year he went 28-10 as a 106-pounder and finished third in the district, earning his first trip to regionals. Johnsonburg’s Aiden Bittler, a freshman, enters his first varsity campaign ranked seventh in the NW Region.

Johnsonburg senior Nolan Shaffer (82-29 career) will begin the season ranked 21st in Pennsylvania and number five in the region. Shaffer was 34-7 wrestling at this weight as a junior, earning runner-up honors at districts and qualifying for regionals for the second consecutive season. Port Allegany’s Chase Weimer (33-12 career) wrestled at 106 pounds a year ago, going 19-6. The Gator junior, 24th ranked in the state and sixth in the NW Region, will be looking to make his first trip to regionals this year. Freshman Reece Bechakas of Kane will be competing in his first season on the Wolves’ varsity roster.

Braedon Johnson (83-19 career) is a two-time state qualifier for Port Allegany, making the trip to Hershey at the end of each of the last two seasons.  Wrestling at 126 pounds a year ago, Johnson went 28-7 and won a district title for the second consecutive year. The senior is ranked 10th in the state and second regionally. Brockway’s Mark Palmer (48-20 career) was a state qualifier two seasons ago and went 15-8 last season on his way to placing second at districts in the 120 pound class. A junior, Palmer is ranked 24th in Pennsylvania and fourth in the NW Region. The older of Brookville’s Popson brothers, Josh (29-37 career), started his junior-year campaign with a December pin of Reynold’s Camren Klenke. Popson was 18-20 last year, qualifying for regionals at 126 pounds. He is currently ranked eighth in the region. Harley Morris of Kane is a two-time regional qualifier. The Wolves’ junior was 22-1 at 126 pounds in 2019-2020.

Dalton Stahli (62-32 career) made his first trip to the state tournament last season as a junior, going 27-13 at 138 pounds. A three-time regional qualifier for the Wolves, Stahli is ranked 15th in Pennsylvania and first in the NW. Junior Kris Shaffer (30-11 career) will be donning a Brookville singlet for his junior season after posting a 12-2 record at 138 pounds last year at Redbank Valley. Shaffer is 25th in the state and third regionally. Port Allegany’s Scott Fuller (33-26) is ranked eighth in the NW Region. The Gator senior was 19-8 a season ago at 120 pounds.

Kaden Dennis of Johnsonburg compiled a 30-10 record as a freshman last year and was district runner-up at this weight. He is 12th in the state and second regionally. After not competing in 2018-2019 Brockway’s Tanner Morelli (38-26 career) returned to the mat last year, going 19-14 and qualifying for regionals at 145 pounds. Morelli, now a senior, is ranked fourth in the region. Ridgway junior Tyler Merritt (22-23 career) will be looking to build upon his 14-13 sophomore season, during which he competed at 138 and 132 pounds.

Aiden Zimmerman was another Johnsonburg grappler who enjoyed a successful freshman season in 2019-2020, going 33-9 at 152 pounds. Currently ranked 13th in the state and fourth in the NW, he made the trip to states after placing first at the district tournament and second at the regional competition. Senior Wyatt Griffin (38-33 career) was 19-11 for Brookville a year ago wrestling at 160 and 170 pounds for the Raiders. He placed third at districts in 2019-2020 and enters this season ranked seventh regionally. Griffin fell to Reynolds’s Kaeden Berger, the state’s number four, 8-0 in a December match. Port Allegany senior Isaiah Caden (54-26 career) and Kane sophomore Luke Ely are both returning regional qualifiers, doing so at 132 and 138 pounds, respectively. Caden was 27-9 last season, going to regionals for the second time after making the trip as a freshman. Ely posted a 19-12 record in his first varsity season.

Cole Casilio (95-21 career) of Johnsonburg is ranked ninth in the state and first in the NW Region. A regional qualifier the past two seasons, the Rams’ senior was 38-6 last season, winning the district title at 160 pounds and going to states for the first time after finishing second at regionals. Brookville’s Jackson Zimmerman begins the season ranked third in the region and Curwensville’s Jake McCracken (61-34 career) seventh. Zimmerman, a sophomore, primarily wrestled at 170 pounds for the Raiders a year ago, compiling a 10-5 record. He started the 2020-2021 season in December with a second period pin of Reynolds’s Jordan DeCarmen. McCracken, a senior, was district runner-up at 170 pounds last season, reaching the regional tournament after finishing second at districts. Cutter Boggess (58-33 career), a senior at Clarion, qualified for regionals last year at 160 pounds after going 19-12. Coudersport junior Dylan Kelly (25-36 career) qualified for regionals as a freshman and went 13-18 a season ago wrestling at 145 and 152 pounds.

Sheffield’s Ethan Finch (81-37 career) starts the season ranked third in Pennsylvania and first regionally. Finch, a senior who has committed to the University of Pittsburgh, is a two-time state qualifier, placing sixth last year at this weight to cap off a season that saw him go 34-12. He was the district champ at 170 pounds as a sophomore. Noah Bash (66-36 career) of Brockway enters his senior campaign ranked 15th in the state and third in the NW. Bash, the district runner-up at 160 pounds the past two seasons, qualified for states in 2019-202 and finished with a record of 27-12. He recently committed to wrestle at Franklin & Marshall. Johnsonburg senior Isaac Zimmerman (77-37 career) finished third in the district at 160 pounds as a sophomore and at 170 pounds as a junior. He posted a mark of 29-12 a year ago. Curwensville’s Duane Brady (35-25 career) was 22-11 last year as a 182 pound junior. Gavyn Ayers of Coudersport, a freshman, will be wrestling his first varsity season.

Aiden Gardner (75-24 career) will be entering his senior season for Redbank Valley ranked 22nd statewide and sixth in the NW. Gardner was 23-7 for the Bulldogs at 195 pounds last season, finishing as the district runner-up at that weight to qualify for regionals. He also qualified for regionals as a freshman. Brookville’s Bryce Rafferty, a junior, saw some time in the Raiders’ starting line-up last year at 195 pounds, going 9-8. In December Rafferty, ranked seventh in the region, pinned Mitchell Mason of Reynolds as the second period was winding down. Derek Kallenborn (43-35 career), a Port Allegany senior, is positioned at eighth regionally. He was 19-13 wrestling at 195 pounds as a junior. Brockway’s Seth Stewart, a sophomore, was 21-11 for the Rovers last year, wrestling primarily at 170 pounds.

The heavyweight division is one of the deepest in the district. Leading the way is state number two and regional number one Nathan Taylor (56-23 career) of Brookville. After going 18-16 over the course of his first two varsity seasons, he hit his stride in 2019-2020 at 220 pounds, going 38-7 and finishing first at district and regionals. He concluded that junior campaign with a fourth place finish at states. Taylor scored a pin in December against Reynolds’s Guy Rocco John-Daniello, ranked 13th in the state. Redbank Valley’s Kobe Bonanno (50-31 career), also a senior, is ranked 14th in the state and fifth in the NW Region. Bonanno was 29-9 as a junior, finishing second in the district and reaching the state tournament in this weight class. Sophomore Gavin Thompson of Brockway, Pennsylvania’s 23rd ranked heavyweight and the regions sixth, was 26-13 at this weight as a freshman on his way to qualifying for regionals. Jacob Kunselman (48-33 career) broke out for Ridgway in 2019-2020, racking up a 25-12 tally as he claimed a heavyweight spot at regionals. Prior to last year, Kunselman, a senior currently ranked 24th in Pennsylvania and seventh regionally, had a 23-21 cumulative record through his sophomore season. Three previous regional qualifiers could also populate the heaviest weight class; Port Allegany senior Justin Young (71-31 career), Coudersport senior Cale Ayers (70-21 career), and Kane junior Shawn Nystrom (34-20 career). Young has qualified for regionals three times; at 182 pounds as a freshman, 195 pounds as a sophomore, and 220 pounds as a junior. He was district runner-up during both his sophomore and junior seasons. He is coming off a 17-7 season in 2019-2020. Ayers finished third in the district at 220 pounds as both a sophomore and junior. His junior-year record was 26-4. Nystrom has been at heavyweight in both his two previous seasons. He qualified for regionals as a freshman but missed out last season despite a 22-10 record.