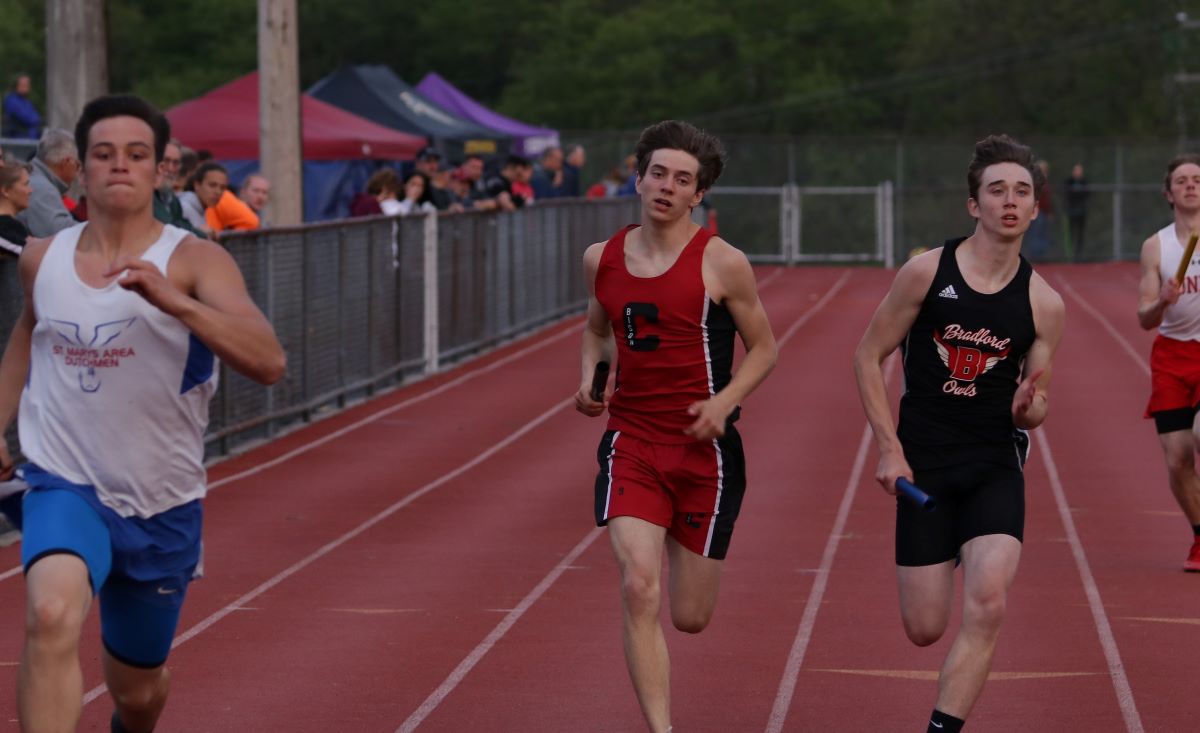 The boys Class 3A 4x400-relay in 2019 was a great race. Photo by Jared Bakaysa of JB Graphics. See more of Bakaysa's work here

BROOKVILLE, Pa. – After a year hiatus, the District 9 Class 3A boys’ and girls’ track and field championships are set for Wednesday, May 18, at Brookville High School.

The field events will start the event at 3 p.m. followed by the track events getting underway at 4 p.m. Cost is $3 for students and $6 for adults and tickets are available at the gate.

For a comprehensive guide to the District 9 Track & Field championships on D9and10Sports.com Powered by Janey Montgomery Scott in Clarion, including an event timesheet, visit our championship hub.

There will be a new champion in District 9 3A boys this season, as the 2019 champion, Punxsutawney, is now competing at the Class 2A level leaving just four teams – Bradford, Clearfield, DuBois, and St. Marys – to battle it out for the 2021 crown.

Prior to the Chucks taking the 2019 title, Bradford was the dominant force in 3A having won the previous four titles. The Owls still have claimed 19 of the past 21 championships dating back to the start of the run in 1999.

Based on seedings, this year’s title will be battled out between DuBois and Bradford with the Beavers seemingly the favorites with seven top seeds, five No. 2 seed,s and nine No. 3 seeds entering the championship.

Bradford has five top seeds, eight second seeds, and five third seeds. Clearfield also comes in with six top seeds, but the depth drops off after that with the Bison only have three No. 2 seeds and two No. 3 seeds.

St. Marys is the defending champion from 2019, and while the Lady Dutch have the most top seeds with eight, Bradford’s depth could make the Lady Owls the favorite. While Bradford has just three top seeds, it has eight second seeds (compared to six for St. Marys ) and nine third seed (compared to just two for St. Marys).

St. Marys Falls to Quaker Valley in PIAA Class 2A Team Tennis
May 18, 2021 D10 Softball: Conneaut Walks Off on Villa; Union City Continues Unbeaten Run; Manning Shines for HC
We use cookies on our website to give you the most relevant experience by remembering your preferences and repeat visits. By clicking “Accept All”, you consent to the use of ALL the cookies. However, you may visit "Cookie Settings" to provide a controlled consent.
Cookie SettingsAccept All
Manage consent