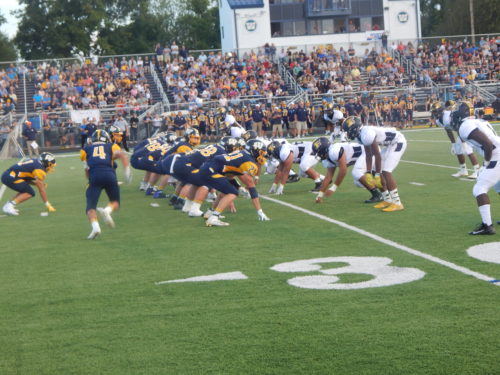 With two weeks remaining in the regular season, nine unbeaten teams remain in District 10, and most will be favored in their remaining contests.

McDowell, unfortunately, because of  a COVID-19 situation at the school, is not playing this week, and had it’s game with Cathedral Prep next week will be pushed back as well.

The Trojans are one of those nine, along with Eisenhower and Reynolds in Class A, Wilmington and Northwestern in Class 2A, Hickory and Fort LeBoeuf in Class 3A and Harbor Creek and Oil City in Class 4A.

Among the marquee matchups this weekend include Farrell at Wilmington (Saturday) and Erie at Cathedral Prep.

As was the case last week, most of the games are the second meeting this season between teams.

The first game was tied 20-20 at halftime, with the Greyhounds outsourcing the Steelers 21-0 in the second half.

There’s a good chance that these two teams will meet a third time in the playoffs, but as far as the task at hand Saturday, the Steelers will look to even the score.

The first meeting was all Raiders, as Cole Toy had a big game on the ground to lead them to a 47-0 victory.

Mercer, led on offense by Aidan Bright, will look to generate some offense this time around against a stingy Reynolds’ defense.

It was business as usual last week for Hickory, taking care of a talented Grove City team for the second time this season to improve to 4-0.

Hornet quarterback Michael Henwood surpassed 1,000 yards passing on the season in last week’s win and has a trio of talented receivers to throw the ball to in Ramarion Whitehead, Rocco Iacino and Matthew Cannone.

Much more than that, however, the Hornet defense has been terrific, yielding just seven points in its last two games.

The first meeting went 48-16 in favor of Hickory, as Sharon, led by dual-threat quarterback Brett Salsgiver, looks to pull the upset.

Eisenhower looks to wrap up the Region 5 title against the Braves, whom they beat 55-6 in Week 2.

In fact, the Knights have outscored their opponents by a staggering 207-12 margin through four games.

Owen Trumbull leads the way in the passing game with 649 yards and nine touchdowns, and has some talented receivers to throw to in the likes of Dillon Benson, Zane Alexander and others.

On the ground, Cael Black has rushed for 397 yards and eight touchdowns.

Iroquois is led on the ground by Michael Hoopsick (542 yards), who had four touchdowns in a win last week over Seneca.

The beat goes on for the Bison, who feature one of District 10’s top running back combinations in Tristin Harris (525 yards, 10 TDs) and Jack Rimpa (419 yards, 9 TDs).

The Bison have outscored their opponents 191-21, including a 41-7 victory over Mercyhurst Prep in Week 2.

Gus Campbell has been a workhorse in the Laker backfield, rushing for 542 yards and five scores.

The Huskies feature one of District 10’s most explosive offensive attacks, and they’re balanced.

Quarterback Casey Smith has a 14-1 touchdown to interception ratio, and he has plenty to work with at receiver, including his brother Cody, Ryan Whitman and Austin Vaughn.

On the ground, Cameron Wiliamson has rushed for 554 yards and six scores.

Big, physical and in your face, Oil City has dominated on both sides of the ball this season, including a shutout win over Warren last week.

Cam Russell is District 10’s top rusher through four games with 779 yards and 10 touchdowns, while the passing connection of quarterback Holden Stahl to Dakota Cole and Brayden Crocker has been incredibly efficient.

They will be facing a Titusville team that is in search of its first win.

The Oilers have outscored their opponents 195-33.

Both of these teams have been affected because of the COVID-19 situation at McDowell. The Royals were supposed to play the Trojans last week, while Prep had them on the schedule for next week in Region 9.

Nevertheless, the Royals and Ramblers square off for the second time this season, with the Ramblers winning 48-26 in Week 2.

The Rambler offense is led by workhorse back Michael Parks (565 yards, 7 TDs).

Erie will turn to the talented pair of Steve Smith and Jahlil Grandberry.

The Northwestern Wildcats are arguably District 10’s best story, storming out of the gates to a 4-0 start, including a 25-8 win in a battle of unbeatens with Cambridge Springs last week.

The Wildcat defense has been superb, allowing just 22 points through four games, including a pair of shutouts.

Lakeview comes in at 2-2 and is paced by dual-threat QB Gavin Murdock, who leads the team in both passing and rushing.

Grove City is better than its record would indicate, with its only two losses coming to unbeaten Hickory. Slippery Rock, meanwhile, is trying to find its footing. They have lost three straight since beating Sharon in their opener.

Corry made life a little uncomfortable last week against Harbor Creek, and will look for revenge against a GM team that beat them 35-0 in the first go around.

The Lancers go through their rushing attack, led by Jared Iavrone-Campbell (370 yards, 6 TDs) and Jaxon Scruthcins (365 yards, 6 TDs). Quarterback Matt Leehan (159 yards rushing) is also a threat on the ground.

Corry is led by back Landon Weis.

The Eagles, who started a week later than almost every other team in District 10, have wins over Warren and Titusville and face a Franklin team that has struggled outside of its 21-0 win over Titusville.

Quarterback Nathan Bortnick is a threat both with his arm and his legs, and has a talented pass-catcher in Zach Walker (254 yards, 4 TDs). On the ground, Conneaut is led by Max Lewandowski.

Another year, another big time running back for Meadville. This season, it’s Khalon Simmons (612 yards, 10 TDs) that has paved the way for the Bulldogs, who come into the game at 3-1.

They are facing a Warren team that is coming off a tough loss to Oil City.

When the Dragon offense is rolling, it’s running back James Swanson and quarterback Micah Passmore spearhead the charge.