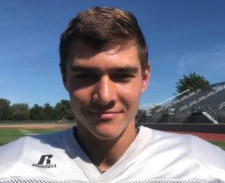 Thirteen teams are unbeaten as we hit Week 3 of the high school football season in District 10, and six of them are squaring off against each other.

In Region 9, Cathedral Prep and McDowell renew their rivalry, while in Region 6, Harbor Creek battles General McLane and on Saturday in Region 8, Oil City takes on Conneaut. The Eagles have played just one game, a 28-0 win over Warren.

It may just be Week 3, but contenders are already starting to take shape, as Reynolds, Wilmington, Northwestern, Cambridge Springs, Eisenhower, Hickory and Fort LeBoeuf are also 2-0.

Harbor Creek has outscored Corry and North East a combined 91-7 in its first two games, but they get their most significant test of the season to date against the Lancers.

They will face a GM team that will run, run and run some more, led by backs Jaxon Scrutchins (218 yards) and Jared Ivarone-Campbell (206 yards).

It’s Prep-McDowell, and they are loaded, having both beat Erie and Butler to start the season.

Prep back Michael Parks has 365 yards rushing through two games, including 257 in the 48-26 win over Erie last week.

While the Ramblers have been more run heavy through two weeks, the Trojans have been pretty balanced. Senior quarterback Chris Juchno is the leader, throwing for 408 yards and four touchdowns through two weeks. His top targets are Justo Rivera, Braeden Soboleski and Anthony Emling. Rivera is also the leading ground-gainer for McDowell (147 yards).

Oil City was 2-0 before Conneaut took the field for a game, beating Franklin, followed by a statement win over Meadville. The Eagles were impressive on Monday, blanking Warren 28-0.

The Oilers’ offensive line has imposed its will on teams through two weeks, paving the way for Cam Russell, who has 444 yards on the ground. Holden Stahl has attempted just seven passes, but they have gone for 190 yards and three scores to Dakota Cole and JT Stahlman.

Nate Bortnick accounted for all four Conneaut scores (three passing, one rushing) in their win over Warren. Zach Walker was his favorite target and Max Lewandowski had 200 yards on the ground.

The Knights will be heavy favorites in this one, having outscored Union City and Iroquois a combined 102-6. Seneca lost to both UC and Iroquois.

Owen Trumbull provides a steady hand at quarterback for the Knights. His favorite receiver is Dillon Benson, with Cael Black getting it done on the ground and Zane Alexander providing a little bit of everything.

Cole Toy has been a one-man wrecking crew for the Raiders in wins over West Middlesex and Mercer with six touchdowns, and will look to keep that going against an Golden Eagles’ squad looking for its first win in their return season to the gridiron.

The Big Reds bounced back from a 7-point loss to Reynolds in their season opener with a 10-0 win over Kennedy Catholic. The Big Reds are led on offense by quarterback Ty Tate.

They will be facing a Mercer that looks to get back on track after getting blanked by Reynolds last week.

It’s not often that the Steelers are coming off a loss, but they are doing just that after getting upended by Wilmington last week.

It’s full steam ahead for the Greyhounds after they outscored Farrell 21-0 in the second half last week.

Ethan Susen, who is coming off a 200-plus yard game and Darren Miller (294 yards rushing) lead a vaunted rushing attack.

They will be facing a Sharpsville team that is coming off a 14-12 win over Greenville.

The unbeaten Wildcats have been on both ends of the spectrum – a thrilling overtime win over Maplewood in Week 1, followed by a 51-0 triumph over Saegertown last week.

Austin Swift (244 rushing yards) will lead the offense against a Cochranton team that has struggled out of the gate.

The Tigers find themselves at 0-2 after losses to Slippery Rock and Hickory, while the Eagles are coming off a win over The Rock.

Logan Breese (376 passing yards) leads the Eagles against a Sharon offense paced by Brett Salsgiver, who leads the team in both passing and rushing through two weeks.

Ayden Miller (202 yards rushing) and Trenten Wheeler (128 yards rushing, 116 passing) lead the unbeaten Blue Devils against a Panther team that fell to Northwestern last week after snapping its 38-game losing streak the week before against Cochranton.

It’s hard to be much more impressive than Hickory quarterback Michael Henwood was last week against Sharon, accounting for six touchdowns to break open a close game in the second half.

The Bison have outscored Fairview and Mercyhurst Prep 89-7 through two weeks and look to keep things rolling against the Yellow Jackets.

They will be facing a Yellow Jacket squad that fell to Fairview after beating Mercyhurst Prep in Week 1. Gunner Bax (259 yards) and Todd Essman (206 yards) lead the Girard ground game.

Week 3 football: Gremlins/Raiders key matchup in South Large
D9and10Sports.com Broadcasting Two Football Games Friday
We use cookies on our website to give you the most relevant experience by remembering your preferences and repeat visits. By clicking “Accept All”, you consent to the use of ALL the cookies. However, you may visit "Cookie Settings" to provide a controlled consent.
Cookie SettingsAccept All
Manage consent