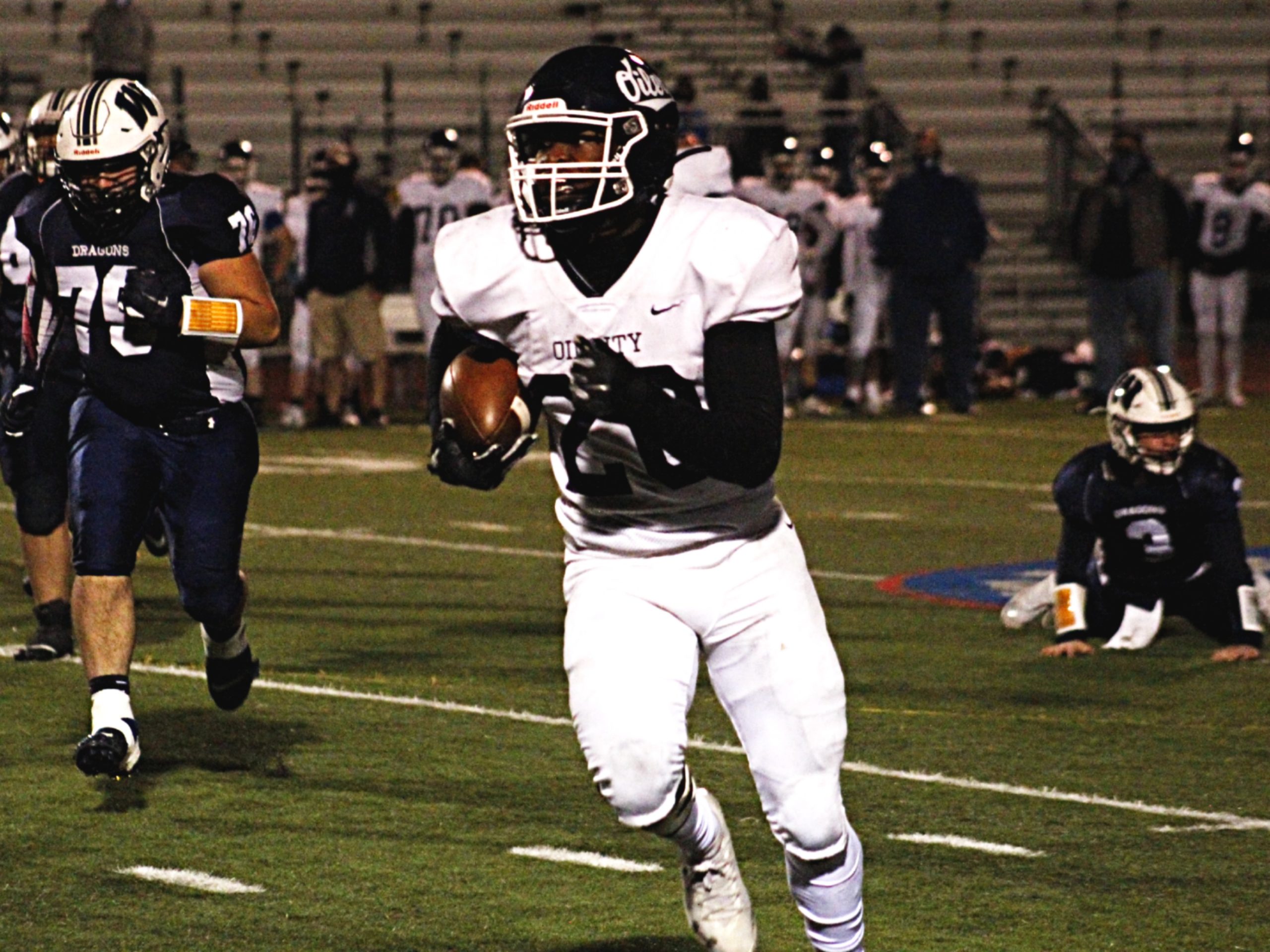 Austin Swift, who rushed for 90 yards on the ground, got the Wildcats (4-0) on the board in the first quarter on a 9-yard touchdown run, the only score of the first half.

Tewell scored on a 6-yard touchdown run in the third and then threw touchdowns passes of 10 and 16 yards to Eric Steinle and Dawson Fiesler, respectively in the fourth, as the Wildcats built a 25-0 lead.

Trenten Wheeler threw a touchdown pass to Landon Byrne to get the Blue Devils (3-1) on the scoreboard.

GROVE CITY, Pa. – Michael Henwood threw for three touchdowns as Hickory beat Grove City for the second time this season to improve to 4-0.

Henwood connected with Ramarion Whitehead and Matt Cannone on 60-yard scores, as well as a scoring strike to Rocco Iacino.

Iacino also scored a rushing touchdown in the win.

WARREN, Pa. – Cam Russell was at it again on Friday.

Russell gained 222 yards on the ground and scored four touchdowns as the Oilers rolled past Warren.

Brayden Crocker had a 49-yard receiving touchdown from Holden Stahl and also scored on a 2-yard run in the secone half for the Oilers.

Landon Douvlos had 52 yards rushing and 45 passing to lead Warren.

GREENVILLE, Pa. – The second time around wasn’t quite as close.

Cole Toy scored two more touchdowns on the ground and finished with 75 yards. The Raiders did almost all their damage on the ground, as Dreyvin Livingston had 98 yards and a score and Brayden McCloskey 80 yards and a TD.

West Middlesex cut the lead to 22-14 in the third quarter after a Colby Johnson 68-yard scoring run, but McCloskey and Toy found the end zone in the fourth quarter to help put the game out of reach.

Owen Trumbull threw for 188 yards and a score and Cael Black rushed for 116 yards and three touchdowns as the Knights improved to 4-0 with their second win over Union City this season, 49-0.

Trumbull also scored on a 48-yard touchdown run that, coupled with a pair of Black TDs, gave Eisenhower a 21-0 lead at the half.

Black busted off a 36-yard scoring run in the third quarter and Trumbull connected with Caleb Robinault on a 42-yard touchdown strike to put the ‘Mercy Rule’ in effect at 35-0.

Colby Hagg and Keegan Eckstrom scored on runs of 41 and 35 yards, respectively for EHS in the fourth quarter.

Zane Alexander added five receptions for 88 yards for Eisenhower. David Roscinski had 75 yards on the ground for Union City.

FAIRVIEW, Pa. – Tristin Harris and Jack Rimpa were at it again, as were the Fort LeBoeuf defense and special teams, as the Bison beat Fairview for the second time this season to improve to 4-0.

Harris had a pair of touchdown runs and led the team with 72 yards on the ground, and Rimpa also had a score on a punt return as well as rushing.

CORRY, Pa. – Casey Smith was as close to perfect as you could be on Friday, passing for 439 yards and five touchdowns to lead the Huskies (4-0) to their second win over Corry this season, 48-25.

This game was much different than the first meeting, as Corry was within two, 27-25, before a 21-0 fourth quarter from Harbor Creek sealed the deal.

Smith scored on a 4-yard run, connected with Ryan Whitman on a 90-yard touchdown and brother Cody on a 17-yarder.

Landen Weis had a big game for the Beavers (1-3), rushing for 134 yards and three touchdowns. His 4-yard run in the third quarter got Corry within two.

Cody Smith had nine receptions for 159 yards and three touchdowns, while Whitman had two catches for 127 yards, both of which went for scores. Cam Williamson had 115 yards and a score on the ground for the Huskies.

Nathan Lesher threw for 160 yards and a score for Corry.

GREENVILLE, Pa. – Ethan Susen ran for 100 yards and a pair of scores as Wilmington improved to 4-0 by beating Greenville for the second time this season.

Susen also added a receiving touchdown in the win.

FARRELL, Pa. –  Anthony Stallworth had a monster game in leading Farrell past Sharpsville for the second time this season.

Stallworth needed just 13 carries to produce 243 yards and six touchdowns for the Steelers.

Christian Hartley completed all four of his pass attempts for 91 yards and a touchdown to Sihe Kellar.

Danny Henwood had 95 yards on the ground and a touchdown for Sharpsville.

ERIE, Pa. – Michael Parks ran for 105 yards and three touchdowns as Prep beat Butler for the second time this season.

Tamar Sample threw for 105 yards and touchdowns passes to Patrick Fortin and Jaheem Rush. Sample also added a touchdown on the ground.

Cooper Baxter had 109 yards and a touchdown on the ground for Butler.

The Eagles (2-1) led 28-0 at halftime, as Bortnick threw touchdown passes to Mason Mihoci and Zach Walker.

Walker and Bortnick hooked up again for another touchdown in the second half, as Walker finished with 84 yards receiving and Mihoci 75.

Garrett Knapp threw for 210 yards for Titusville (0-4), including a touchdown to Antonio Malve, who had 93 yards receiving. Brock Covell had 94 yards receiving for the Rockets.

MEADVILLE, Pa. – Khalon Simmons rushed for 159 yards and four touchdowns as the Bulldogs (3-1) cruised past Franklin.

Griffin Buzzell, Tamoj Lyons-Glover and Sam Burchard all had rushing touchdowns as well for Meadville.

Lyons-Glover had 79 yards rushing and also caught a 55-yard TD pass from Burchard. Buzzell finished with 90 yards on the ground.

STONEBORO, Pa. – Calogano Wilkins rushed for 105 yards and Gavin Murdock, Isaac DeVault and Damon Kerr all scored on the ground to send Lakeview past Saegertown.

The Sailors actually got on the board via a safety, before touchdown runs by DeVault and Kerr gave them a 15-0 lead.

Saegertown’s Jacob Resinger kept his team close with 102 yards and a pair of scores on the ground.

Week Four Football Scoreboard
D9 FB Recaps: Keystone Rallies Past Curwensville, St. Marys With Statement Win, Lent Leads Smethport to Victory
This website or its third-party tools process personal data.In case of sale of your personal information, you may opt out by using the link Do not sell my personal information.
×
Manage consent